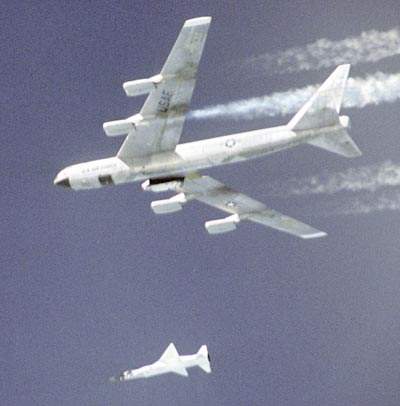 In March 2004, a modified Pegasus booster rocket and X43 vehicle drop steadily away from the NASA B-52B aircraft. 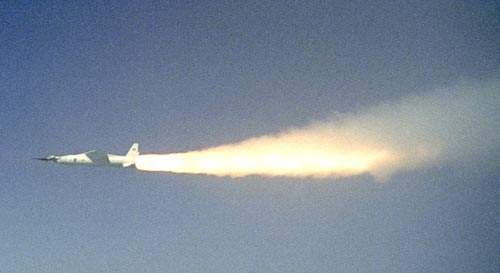 In March 2004 over the Pacific Ocean, the modified Pegasus rocket motor ignites after release from the B-52B aircraft, beginning the acceleration of the X-43A vehicle. 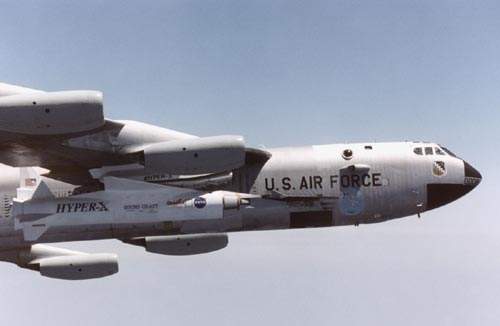 The first captive flight of the X-43A vehicle and the Pegasus booster mounted on the B-52B carrier aircraft over the Pacific in April 2001. 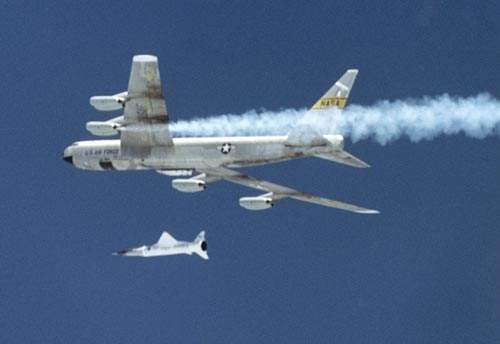 The photograph, taken in June 2001, shows the X-43A and the booster moments after release from the B-52B carrier aircraft, just before ignition of the Pegasus rocket motor.

Artist concept of the Hyper X-43A in flight. The X-43A is powered by a supersonic combustion ramjet engine (scramjet) which uses gaseous hydrogen fuel. 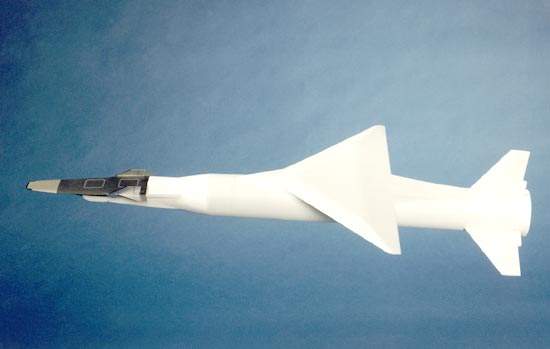 Model of the X-43A vehicle mounted on the booster. 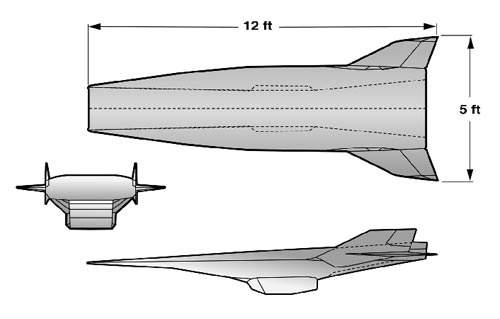 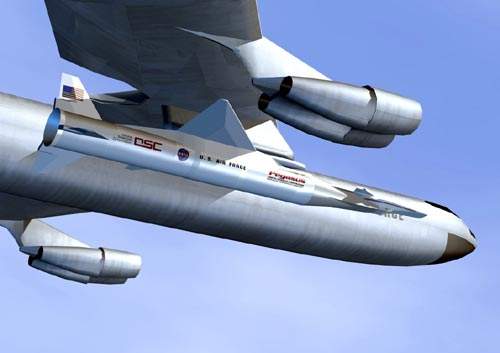 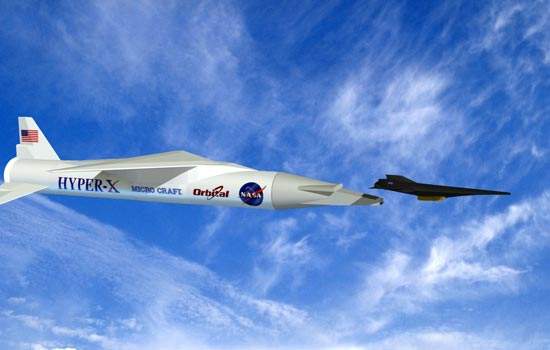 Image (captured from an animation video) showing the X-43 separating from the booster.

Image (captured from an animation video) showing the X-43 after separating from the booster. 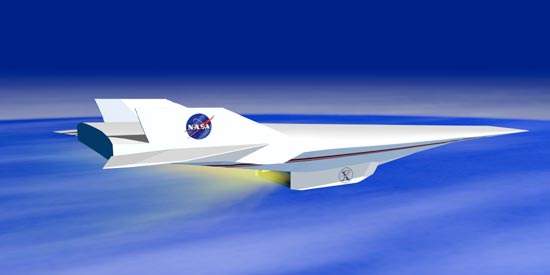 NASA’s X-43A or Hyper-X air vehicle achieved a record-breaking speed of close to Mach 10 (12,000km/hr or 7,000mph) in a test flight in November 2004, which was the culmination of a three-flight test program. Hyper-X is an experimental hypersonic flight research program managed by the NASA Langley Center at Hampton, Virginia. The purpose of the program is to develop a hypersonic air vehicle powered by an air-breathing engine. Hypersonic speed is defined as speed above Mach 5 or above five times the speed of sound.

The technology is planned to lead into the development of hypersonic manned and unmanned aircraft and reusable space launch vehicles. Hypersonic propulsion systems will allow the development of very high-speed strike aircraft, manned or unmanned, capable of attack at great distances deep in hostile territory in a very short time.

The type of engine installed in the vehicle will reduce costs on space programs by increasing the payload capacity. The payload capacity is increased because there is no requirement for the heavy oxygen tanks installed in conventional rocket propulsion systems. The oxygen used for fuel ignition is ‘scooped’ from the atmosphere by the configuration of the air intake on the airframe.

NASA Dryden Flight Research Center at Edwards, California, is responsible for the manufacture and flight of three unpiloted X-43A research vehicles and also for the manufacture of the expendable booster rockets for the launch of the X-43A vehicles. The flight data is used to evaluate the performance of the X-43A vehicles at speeds of Mach 7 and Mach 10, and demonstrate the use of the air-breathing engines. The test flights from NASA Dryden continue over the Pacific Missile Test Range and return to Dryden.

The X-43A reached the new speed record of Mach 7 then Mach 10 during test flights in March and November 2004 from NASA Dryden Flight Research Centre. Before these test flights, the world’s fastest air-breathing aircraft was the SR-71 which cruises at Mach 3. A B-52 aircraft was used to carry the X-43A on the starboard wing pylon to an altitude over 40,000ft (12,000m). The B-52 carried out a drop launch of an Orbital Sciences Corp booster rocket and the X-43A vehicle.

A previous X-43A test flight in June 2001 was halted due to an anomaly in the booster motor.

The Orbital Sciences Pegasus booster rocket carries the X-43A up to its test altitude of 100,000ft where the X-43A vehicle separates from the booster and flies under the power and control of its own built-in engine and pre-programmed control system.

“The technology is planned to lead into the development of hypersonic manned and unmanned aircraft and reusable space launch vehicles.”

The X-43A vehicle separates from the booster rocket by the activation of two small pistons. Immediately after separation, the X-43A’s engine operates for just over ten seconds demonstrating forward thrust in flight. When the engine test is completed the vehicle is programmed to go into a high-speed glide which provides six minutes of aerodynamic data at hypersonic speed. The X-43A continues to a pre-programmed mission completion point in the Weapon’s Division Sea Range managed by the Naval Air Warfare Center and situated in the Pacific off the southern coast of California.

At hypersonic speeds, parts of the air vehicle reach very high temperatures at which metals can melt or vaporize. The X-43A is constructed with a tile-based thermal protection system developed by Boeing, carbon-carbon composites and high-temperature resistant metals. The materials were selected to withstand the exceptionally high temperatures and forces on the airframe resulting from the very strong shock waves that are generated in hypersonic flight.

The X-43A control system provides extremely precise aerodynamic control to deal with the rapid changes in forces and motion at hypersonic speed.

The X-43A is powered by a supersonic combustion ramjet engine (scramjet) developed by ATK, which uses gaseous hydrogen fuel. Scramjet engines provide design advantages in smaller size, simplicity and affordability of reusable vehicles. The scramjet engines are air-breathing engines and have significantly fewer moving parts than traditional turbojet engines. Also, scramjet engines do not require an oxidizer to be carried on board for the combustion process, as does a conventional rocket engine.

The X-43A is equipped with a sensor and control system to prevent the disruption of supersonic airflow to the engine inlet in order to avoid the reduction in engine thrust.

The X-43B is a larger version, length 30ft to 50ft, of the X-43A and X-43C, fitted with a reusable combined cycle propulsion system which combines rocket-based and turbine-based engine technology. The X-43B will fly from low to high speeds, going from low-speed mode flight to scramjet mode flight.

Flights have not yet been scheduled for the X-43B. NASA expects to announce the X-43B program schedule when the development of the X-43C nears completion towards 2009.

The X-43C vehicle has a larger airframe than the X-43A. The X-43C is 4.87m in length and weighs 2,270kg. The vehicle will fly at speeds from Mach 5 to Mach 7. The X-43C is equipped with a HyTech solid hydrocarbon fuel scramjet engine being developed by Pratt & Whitney. The solid fuel propulsion system provides a longer test flight time than available with the gaseous hydrogen engine as installed in the X-43A.

Three flights of the X-43C were planned from 2008, using a modified Pegasus booster developed by Orbital Sciences which would accelerate the expendable X-43C vehicles to sufficiently high speeds at around Mach 5 to ignite and sustain the scramjet engines. Funding for the development program has been withdrawn.

A fourth iteration, the X-43D is in the early concept and study phase. The vehicle uses a hydrogen-fuelled dual-mode scramjet propulsion system to achieve speeds of Mach 10 to Mach 15. Mach 10 is equivalent to 2 miles per second or ten times the speed of sound.