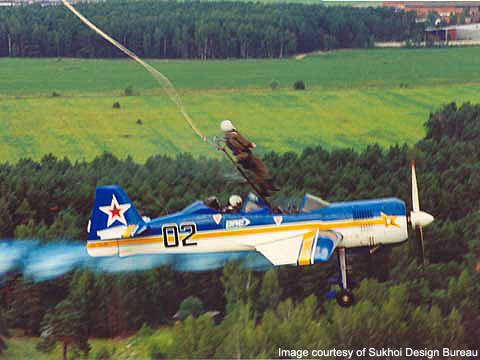 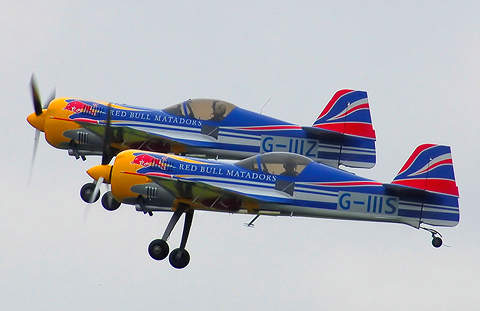 The Su-26M Red Bull Matadors taking off from Kemble Airport in Gloucestershire, England, in 2008. 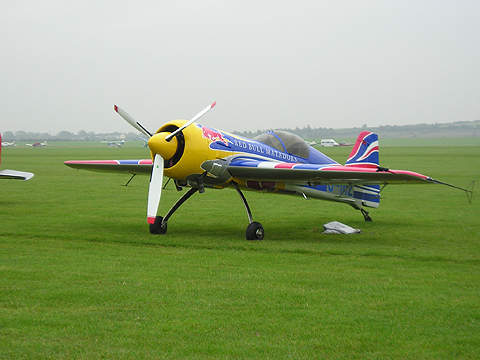 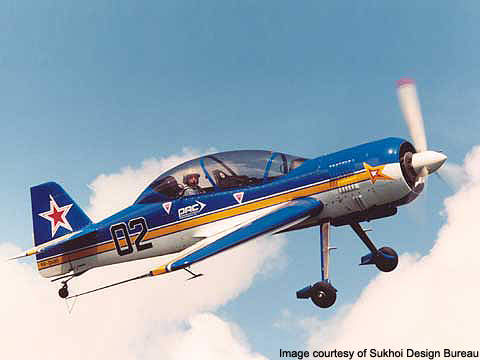 The Su-26 performing its maiden flight. 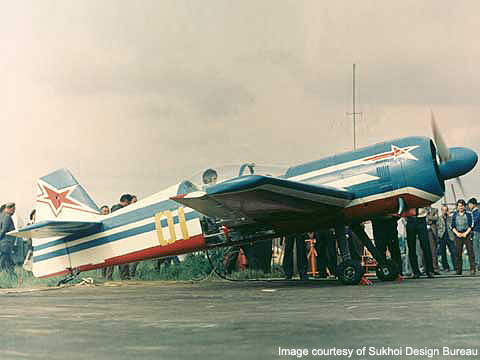 The Su-26 is powered by a Vedeneyev M-14P radial engine. 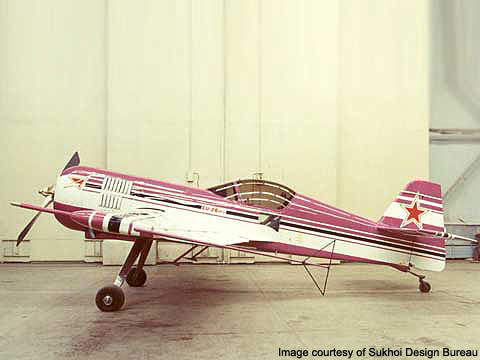 The Su-26M was showcased at St. Catherine Airport's airshow.

The Sukhoi Su-26, a single-seat aerobatic aircraft, is designed and manufactured by Sukhoi Design Bureau, Russia. The Su-26 is principally used for training, state-of-the-art aerobatic competitions and expos.

The development of the Su-26 began in 1983 and it completed its maiden flight on 30 June 1984. The aircraft was first revealed at the world championship held in Hungary in August 1984.

The Su-26’s rate of climb, performance and controllability allow the pilot to control the high-speed aircraft within a limited space. About 153 Sukhoi brand sport aircraft had been constructed by 2003.

The Su-29 is designed and developed principally to teach and train pilots and participate in aerobatic competitions.

“The Sukhoi Su-26 is a single-seat aerobatic aircraft.”

The Su-26M is an upgraded version of the Su-26 and features a polished tail surface as well as a three-bladed Hoffman propeller. Wing fillets and increased rudder deflection angles enhance the aerodynamics and controllability of the Su-26M. Modifications in the fuselage, wing profiles and engine cowlings reduced the weight of the variant by 30kg.

The Su-26Mkh aircraft’s ferry range is increased by an extra fuel tank fitted in the wing section. As of 2010, a total of 11 Su-26Mkh aircraft have been delivered to the US, Switzerland and other countries.

The Su-26M2 is manufactured by adding an extra fuel tank and smoke flight tracer in the fuselage section of the Su-26. Russia, Australia, the US and other countries are currently operating 13 Su-26M2 aircraft.

The Su-26 was designed to keep the weight of the airframe at a minimum. The tough design of the aircraft attains a high power to weight ratio.

“The tough design of the aircraft attains a high power to weight ratio.”

The aircraft was designed by upgrading current standards of high-manoeuvrable aerobatic sports craft to an advanced level of pilot performance.

The use of more composite materials enables the pilot to perform aerial stunts safely during forward acceleration of up to +12g. The aircraft provides high manoeuvrability and controllability compared with other sports craft.

The aircraft is constructed by using robust and light composite materials, which include carbon fibres made of plastics, organoplastics and glass fibre made of strengthened plastics, stainless steel, titanium and aluminium alloys. The incorporation of these complex composite materials sustained high acceleration (g-loads) to extend its limits.

The aircraft features an ergonomic cockpit equipped with a 35° back-tilt anthropometric seat for pilot with a unique safety harness. The entire all-round field can be viewed through the canopy. The design of the cockpit allows the pilot to accurately control the aircraft’s position in space.

The Su-26 is powered by a single Vedeneyev M-14P radial engine. Each engine produces a maximum of 270kW of power. The nine-cylinder, four-stroke, air-cooled petrol M-14P engine is developed based on the Ivchenko AI-14. The engine features a carburettor, two magnetos, a mechanical fuel pump, a generator and oil pump. The dry weight of the engine is 214kg and its diameter is 9.85m.