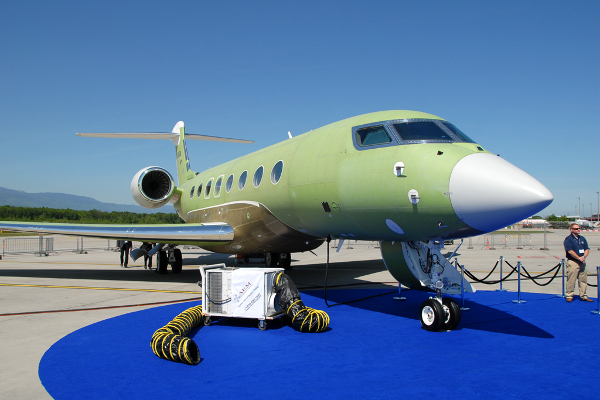 Offering a maximum cruise speed of Mach 0.79, the Cessna Citation X is the world’s fastest business jet. Swept-wing layout, low-drag airframe and powerful engines allow the Citation X to fly at incredible speeds of up to Mach 0.935.

The high cruise speed of the Citation X is complemented by leading edge slats, while the Fowler flaps contribute to low approach speeds and high performance during takeoff and landing. The aircraft is fitted with two Rolls-Royce AE3007C2 turbo fan engines.

Each AE3007C2 engine, with target-type thrust reversers, develops a takeoff thrust of 31.29kN. The aircraft can reach a maximum altitude of 51,000ft at a maximum rate of climb of 3,650ft/min also making it the world’s highest altitude passenger plane.

The Gulfstream G650 is an ultra-high-speed business jet which can fly at a maximum speed of Mach 0.925. The G650 was the world’s fastest business jet when introduced in 2008.

The G650 is capable of carrying eight passengers plus crew for a maximum range of 7,000nmi (12,964km) at long-range cruise speed of Mach 0.85. The spacious cabin of the aircraft can accommodate up to 18 people.

The Global 8000 was unveiled at NBAA 2010 event conducted by the National Business Aviation Association. The first aircraft is expected to enter service in 2017. The business jet will feature Bombardier Vision flight deck and a spacious cabin which is largest in its class.

The GE Passport 20 engines fitted aboard the aircraft ensure low fuel burn and emissions while the power-plant allows the Global 8000 to fly at maximum operating altitude of 51,000ft.

The Global 7000 from Bombardier offers a maximum speed of Mach 0.90. The aircraft can fly at a typical cruise speed of Mach 0.85 while carrying 10 passengers to a range of 7,300nm.

Bombardier Aerospace introduced the Global 7000 in October 2010 and has scheduled its entry into service in 2016. The aircraft will feature Rockwell Collins Pro Line Fusion avionics suite and a wide four-zone cabin.

The GE Passport 20 propulsion system delivers a maximum thrust of 73.4kN and ensures flying at a maximum operating altitude of 51,000ft. The Global 7000 has an initial cruise altitude of 43,000ft.

The Falcon 7X business jet with a maximum speed of Mach 0.90 competes with Bombardier’s high-speed business jets in terms of cruise speed. The 7X is integrated with a new wing design offering high lift-to-drag ratio.

The first Falcon 7X was delivered in June 2007 and more than 180 aircraft are currently in service within 34 countries. The 7X fleet across the world has amassed over 170,000 flight hours. It is the first business jet to integrate a digital flight control system.

The aircraft is powered by three Pratt & Whitney Canada 307A engines producing a thrust of 6,400lb each. The aircraft can reach a distance of 5,950nmi (11,020km) while travelling at a cruise speed of Mach 0.80.

The Falcon 5X, a new business jet being produced by Dassault Aviation, is designed to fly at a maximum speed of Mach 0.90 making it one of the world’s fastest business jets. The aircraft can carry 16 passengers.

The Falcon 5X was launched during the NBAA Convention in October 2013. The first simulated flight of the Falcon 5X was conducted in November 2013 and first flight is scheduled for the first quarter of 2015.

The new-generation Silvercrest engines supplied by Safran Snecma will power the Falcon 5X. The power-plant will ensure a maximum range of 5,200nmi (9,630km) when flying at a cruise speed of Mach 0.80.

The G550 aircraft was launched into the market as an upgraded version of Gulfstream V (GV) in 2003. The G550 and GV set 40 city-pair records within half-decade after service entry establishing over 100 aviation records for distance, speed and altitude.

The Global 6000 ultra-long-range business jet has a maximum speed of Mach 0.88. Developed as an improved variant of Global Express, the first Global 6000 was unveiled during a ceremony at Orlando Executive Airport in October 2012.

The aircraft incorporates innovative and advanced features such as Bombardier Vision Flight Deck and a stand-up shower.

The power-plant of the Global 6000 integrates Rolls-Royce BR710A2-20 turbofan engines which develop a take-off thrust of 65.6kN each.

The Global 5000 business jet from Bombardier Aerospace can fly at speeds up to Mach 0.88, while the typical cruise speed is Mach 0.88. The aircraft offers users a combination of speed, performance and spacious interior space.

A smaller variant of the Global Express business jet, the Global 5000 was officially unveiled in February 2002 and the first aircraft completed maiden flight in March 2003. The aircraft entered service in April 2005.

The Rolls-Royce BR710A2-20 turbofans fitted aboard the aircraft produce thrust of 65.6kN each and ensure high airfield performance during take-off and landing.

The G450 was launched in the market in 2003 as an upgraded variant of G400/GIV-SP aircraft. The upgrade incorporates aerodynamic and material enhancements as well as PlaneView cockpit.

The Gulfstream G450 is equipped with two Rolls-Royce Tay Mk 611-8C engines developing a maximum thrust of 61.6kN each. The power-plant ensures superior takeoff performance even while operating from high altitude airports and in hot conditions.