Range With 8 passengers and 3 crew 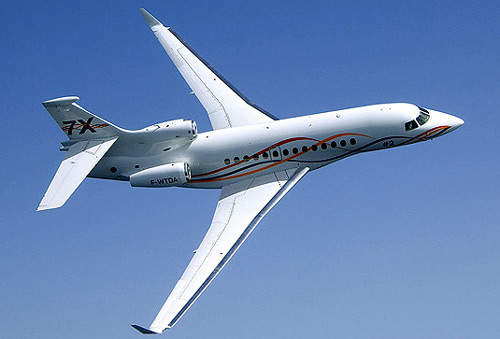 The Falcon 7X received FAA and EASA certification in April 2007. 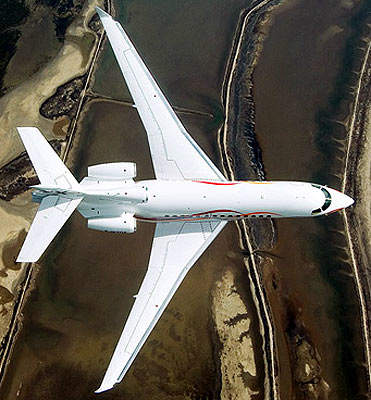 The fly-by-wire Falcon 7X is the latest member of the Falcon family of aircraft and flies faster, farther and higher than its predecessors.

The Dassault / Honeywell EASy cockpit reduces pilot workload, allowing the pilot to concentrate on situational awareness and the successful completion of the flight. 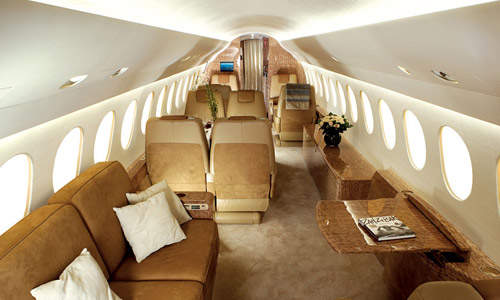 A typical Falcon 7X cabin configuration. The cabin can accommodate up to eight passengers. 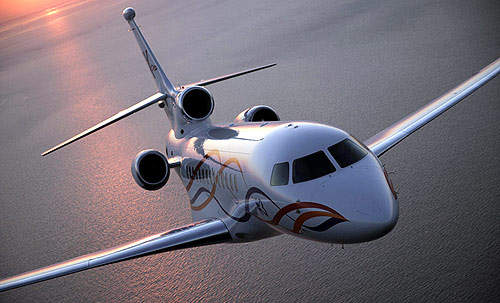 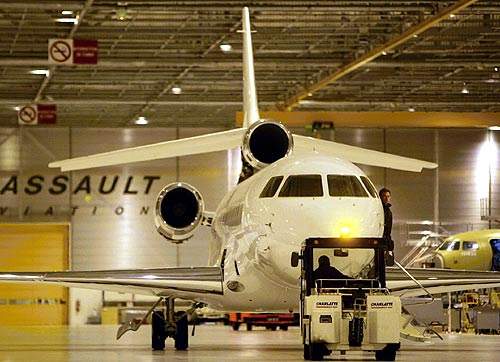 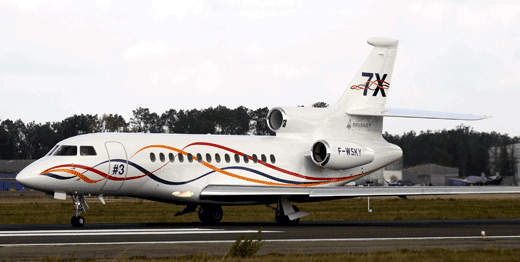 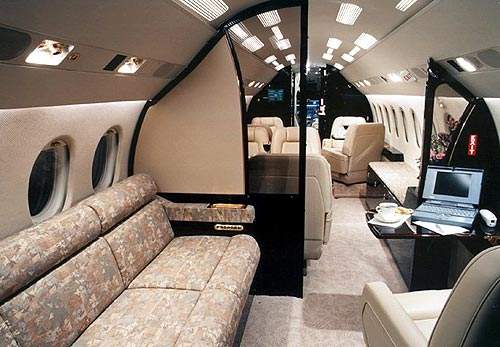 The Falcon 7X cabin is configured in three lounges and can accommodate up to six fully berthable passenger seats.

The Falcon 7X is now being used in 24 countries and has completed more than 30,000 flight hours and 15,000 take-offs and landings.

Orders have been received for 200 aircraft, including 24 for NetJets Europe, which were ordered in September 2006 for delivery from 2008–2014.

“The Falcon 7X received FAA and EASA certification in April 2007 and entered service in June 2007.”

With 14 passengers and a crew of three, the range of the aircraft is 10,556km (5,700nm), allowing non-stop flight from Riyadh to New York or from Paris to Tokyo. The aircraft is unrestricted by ETOPS considerations across oceans. The aircraft flies at speeds above Mach 0.85.

Orders have been received for 200 aircraft, including 24 for NetJets Europe, which were ordered in September 2006 for delivery between 2008 and 2014.

The fin box is of carbon construction. The vertical stabiliser is lighter and stronger and 20% larger in size than that of the Falcon 900EX.

The aircraft has a high aspect ratio wing (ratio of the chord of the wing to the span of the wing) with a distinctive sweepback angle of 34° on the inboard section reduced to 30° on the outboard section. The wing area is increased by 40% compared to that of the Falcon 900 aircraft.

New design improvements are being planned for Falcon 7X in the future. The improvements include the “load 10” update to the EASy flight deck. Load 10 includes take-off and landing data. The certification of Falcon 7X enhanced flight vision system (EFVS) is expected in late 2010.

The Falcon 7X is the first aircraft to be developed entirely in a virtual environment. Dassault used product lifecycle management software from Dassault Systemes, a virtual product development software suite to develop the aircraft in terms of design, development, construction, assembly, system integration, test and maintenance.

“The Falcon 7X is the first aircraft to be developed entirely in a virtual environment.”

Aircelle and Aermacchi are responsible for the engine nacelles and thrust reversers. Saint Gobain Sully has been contracted to supply the double-curved panelled windscreen and cabin windows.

All the Dassault aerospace production facilities are involved in the manufacture of the aircraft. The upper and lower wing panels are being manufactured at Dassault at Seclin, the front section fuselage in Argenteuil, fuselage assembly in Biarritz. The wing is assembled in Martignas near Bordeaux. Final assembly is at Dassault Bordeaux Merignac.

As with all aircraft of the Dassault Falcon family, the Falcon 7X is transferred to the Dassault manufacturing plant at Little Rock, Arkansas for outfitting.

The Dassault / Honeywell EASy cockpit reduces the pilot workload, allowing the pilot to concentrate on the successful completion of the flight and on situational awareness. The Falcon 7X EASy flight deck, as installed in the Falcon 900EX, Falcon 900DX, Falcon 2000EX, is based on the Honeywell Primus II Epic avionics suite.

A seven-channel MCS-7000 satellite communication system (SATCOM) is available as an option. The SATCOM has an EMS Technologies AMT-50 high-gain antenna.

The cabin width, 2.64m, is the same as in the Falcon 900EX. It is however substantially longer at 11.91m from the baggage hold door to the third flight deck seat.

The cabin design has been configured for passenger comfort for 13-hour non-stop flights and has acoustic control (with noise levels between 50dB and 52dB SIL) and thermal control. The cabin is configured in three lounges and can accommodate up to six fully berthable passenger seats.

Dassault Falcon introduced a new cabinet interior design for the Falcon 7X in May 2009. The new design was developed in partnership with BMW Group DesignworksUSA, a subsidiary of BMW Group.

The new design provides curves to the entire interior. An arc carpet connects the cabin interior from front to back. Curves in the galley and the main cabin enable in better flow. The new lighting in the cabin gives it a spacious look.

Dassault Falcon and BMW Group were awarded the Good Design Award for 2009 by the Chicago Athenaeum and the European Centre for Architecture Art Design, for their new Falcon 7X cabin design.

“The Falcon 7X is the latest member of the Falcon family and flies faster, further and higher than its predecessors.”

The new cabin will be available for deliveries from the first quarter of 2011.

The three Pratt & Whitney Canada PW307A engines are flat rated to 28.47kN (6,402lb) thrust which allows the aircraft to operate from more demanding airfields in hot and high terrain. The engines are fitted with full authority digital engine control (FADEC).

The aircraft is fitted with Messier-Dowty main and nose landing gear, landing indication subsystems, steering control, electrical harnesses door mechanisms and actuators. The landing gear is powered by a Parker hydraulics system and is equipped with ABSC brakes.