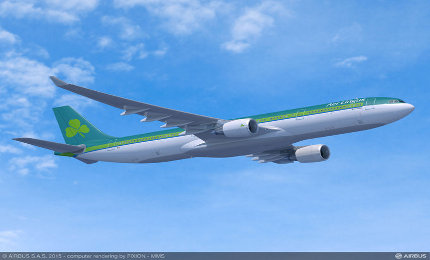 The deal was signed in Beijing during German chancellor Angela Merkel’s visit to China, and includes 30 wide-body A330 planes and 100 single-aisle A320 aircraft.

The Québec government in Canada signed a MoU with Bombardier to invest $1bn in the company’s C Series aircraft programme, days after talks ended with Airbus.

Boeing subsidiary InSitu conducted a test flight of its ScanEagle drones to inspect a 132 mile long railway track in remote areas of New Mexico, US.

InSitu conducted the test flights in collaboration with BNSF railway, where a series of flights between Clovis and Belin was planned. The programme is part of a US Federal Aviation Administration (FAA) project to develop regulations for the commercial use of drones.

The company claimed to have completed the first commercial operations beyond the visual line of sight with an unmanned aerial system.

Taiwan-based EVA Airways announced that they plan to buy up to 24 787-10 Dreamliners and two additional 777-300ER jetliners from Boeing, which will be worth more than $8bn at list price.

The airline participated in the development of the Boeing 777-300ER and became a launch customer.

Nasa finished testing components of an engine powered by methane, which has never been used by the space agency for propelling its spacecraft.

During a series of tests, a blue flame erupted as a rocket engine thruster roared to life at Nasa’s Marshall Space Flight Center in Huntsville, Alabama, US.

The blue flame was the cause of the thruster’s methane fuel.

Norway-based Norwegian Air placed an order of 19 787-9 Dreamliners with Boeing valued at $5bn in the list price.

Boeing said this is the largest single order for 787-9s from a European airline.

The order includes the option to buy ten more 787-9s as part of its plan to expand its existing long-haul fleet over the next decade.

Norwegian Air CEO Bjørn Kjos said: "This order of 19 new Dreamliners is a major milestone and enables Norwegian to offer a wide range of new routes to consumers worldwide."

The company aims to meet its goal for manned private flights to the edge of space by 2017.

The test flight carried a scale down model of its flight capsule under a huge balloon that travelled to a final altitude of 100,475ft, successfully marking the transition from sub-scale to full scale testing.

The system was developed in collaboration with the Georgia Institute of Technology, using funding from DARPA’s Mission Adaptive Rotor (MAR) programme.

Helicopters require stable and flat surfaces during landing and take-off due to their skid and wheel-based landing gear. However, such surfaces are often hard to find in regions requiring their services such as forward operating areas, ships at violent sea areas and natural-disaster zones.

Boeing signed an order with El Al Israel Airlines for up to nine 787 Dreamliners, valued at more than $2.2bn.

The airline seeks to replace its existing long-haul fleet, increase capacity and provide greater route flexibility to and from its hub at Ben Gurion Airport in Tel Aviv.