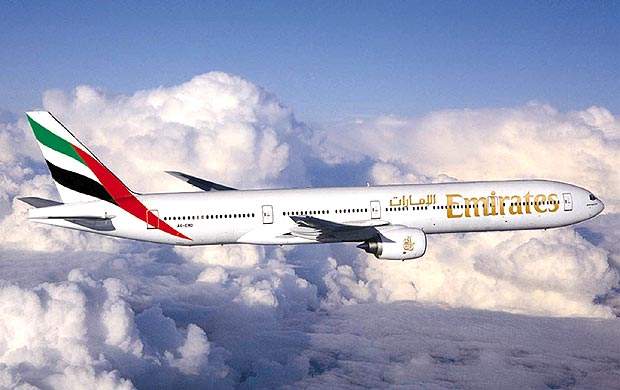 More than 700 of the Boeing 777 family have been delivered since the aircraft entered service in May 1995. 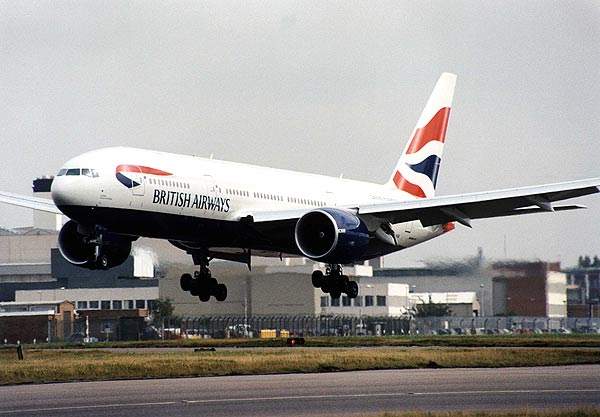 A British Airways 777 taking off. 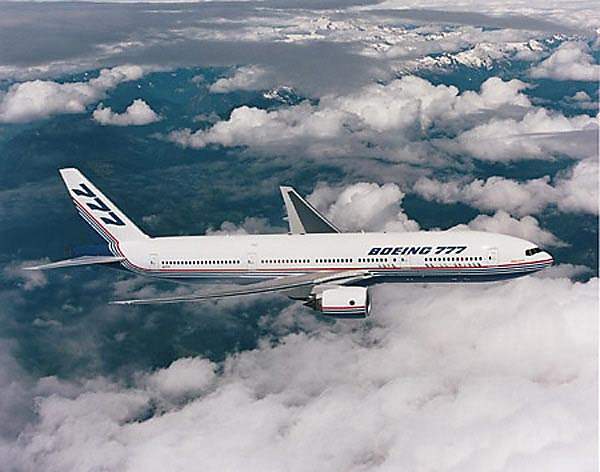 The Boeing 777-200 seats between 305 and 328 passengers in a typical three-class configuration. 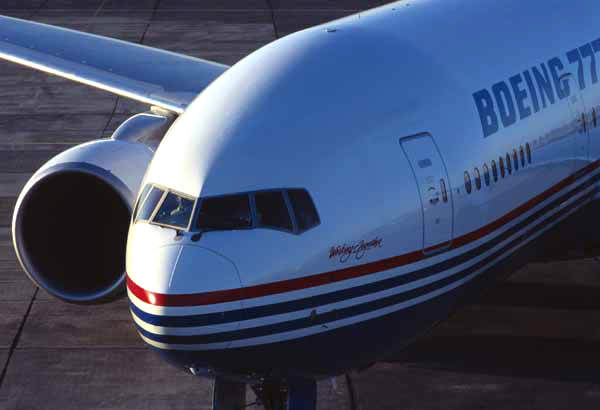 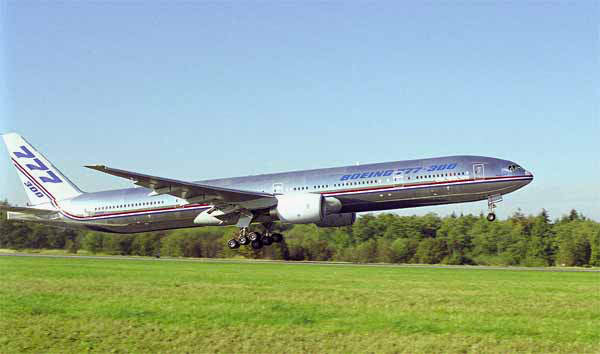 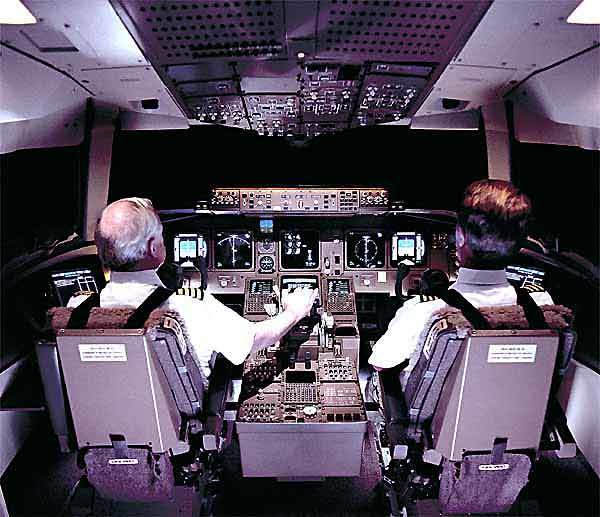 The Boeing 777 was the first aircraft with an ARINC 629 digital data bus linked to the main and standby navigation systems. 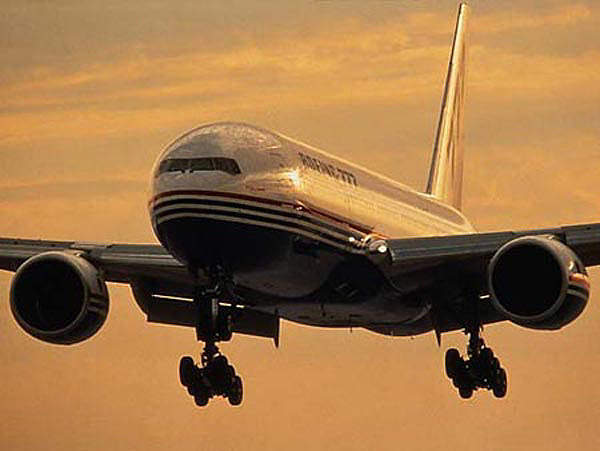 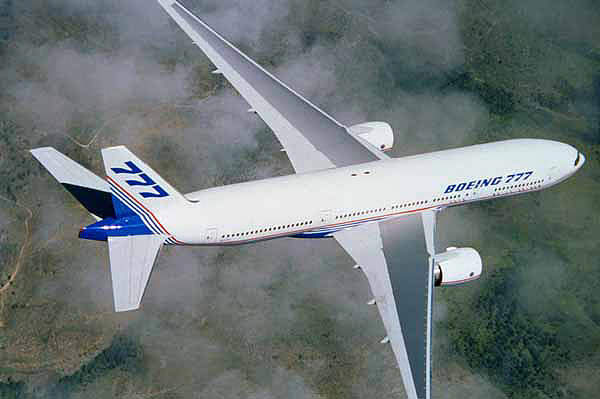 The 777 has two pod-mounted turbofan engines below the leading edges of the wings, rated at 327 to 436kN thrust.

The Boeing 777 aircraft is currently being built at a production rate of seven a month and will reach 8.3 aircraft a month by 2013.

The 777-200 was the first of the family of aircraft in production and entered service in May 1995. It has a range of up to 10,900km and seats a maximum of 440 passengers, or between 305 and 328 in a typical three-class configuration. 88 aircraft were delivered and production is complete.

The 777-200ER (extended range) flies the same number of passengers as the 777-200 but to a range of 14,260km. The aircraft has a higher fuel capacity and strengthened wing, fuselage, engine pylons, landing gear and empennage (tail unit).

The 777-200LR (long-range) Worldliner is an ultra-long-range version, designed to be the longest-range aircraft in the world. The aircraft programme was originally known as the 777-200X and was launched in February 2000. Work on the aircraft was halted in October 2001 but restarted in March 2003. The first flight took place in March 2005.

An additional fuel tank installed in the rear cargo bay brings the fuel capacity to 195,280l. The aircraft will also be fitted with new raked wingtip extensions.

The aircraft received US and European certification in March 2004 and was delivered in May 2004 to its launch customer, Air France. The higher fuel capacity, compared to the 777-300, provided a range of 13,335km with 359 passengers.

International customers for the Boeing 777

Boeing was awarded a $3.3bn contract by Saudi Arabia Airlines in November 2010 to supply 12 777-300ERs with an option to procure ten additional aircraft.

TAM Linhas Aereas awarded a $568m contract to Boeing in February 2011 for two 777-300ERs and to purchase rights for two additional aircraft.

A two-bunk flight crew rest area is installed on the port side of the flight deck. Optional installation is a crew rest module in the underfloor section. The crew rest module houses six bunks and occupies the same floor area as a standard 96in cargo pallet.

The aircraft has Boeing’s fly-by-wire controls with flight envelope protection and automatic pilot and stabilisation functions.

The fly-by-wire system sends back-driven signals to the pilots’ rudder pedals and control columns to provide the pilot with sensory awareness of the activities of the automated systems.

The Boeing 777 was the first aircraft with an ARINC 629 digital data bus linked to the main and standby navigation systems. The navigation system includes a Honeywell ADIRS air data and inertial reference system with a six-ring laser gyroscope, a Honeywell terrain collision avoidance system (TCAS) and a Honeywell and BAE Systems 12-channel global positioning system. The aircraft is equipped with a Honeywell all colour weather radar.

The aircraft can be fitted with a Honeywell and Racal satellite communications system.

Boeing manufactures the flight deck and forward section of the cabin, the wing, tail and the engine nacelles. Boeing subcontracts the manufacture of components and systems, which are transported to Boeing for final assembly and tests. Subcontractors include Alenia in Italy, ASTA in Australia, BAE Systems in the UK, Bombardier Shorts in the UK, Embraer in Brazil, Japanese aerospace companies, Kaman in the US, Korean Air, Northrop Grumman in USA and Singapore Aerospace.

The aircraft has two pod-mounted turbofan engines below the leading edges of the wings. The General Electric, Pratt & Whitney and Rolls Royce Trent engines are rated at 327kN to 436kN thrust.

The main fuel tanks are installed in the wing torsion box with the reserve and surge tanks on the inboard side of the wing. The fuel capacity of the 777-200 is 117,350l. Smiths Industries supplied the ultrasonic fuel quantity gauge system.

The aircraft has retractable tricycle-type landing gear. Measco and Messieur Bugatti developed the main landing gear under a joint agreement, which features six-wheeled bogies. Control of the steering rear axles is automatically linked to the steering angle of the nose gear.

The main landing gear is fitted with Honeywell Carbenix 4000 brakes. Initial activation of the brakes during taxiing applies the brakes to alternate groups of three wheels only in order to minimise wear on the brakes. The nose gear is twin-wheeled and is steerable.