X
Advertise with us
Mrinmoyee 15 October 2015 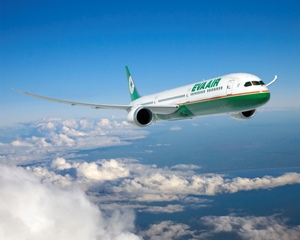 Taiwan based EVA Airways is planning to buy up to 24 787-10 Dreamliners and two additional 777-300ER jetliners from Boeing, which will be worth more than $8bn at list price.

The airline participated in the development of the Boeing 777-300ER and became a launch customer.

The 787-10 will be the third and longest member of Beoing’s 787 family and the aircraft manufacturer claims it to be 25% better in fuel economy and emissions.

After delivery, EVA Airways will be one of the first airlines in the world to use the newest member of the 787 Dreamliner family aircraft.

"EVA Airways has been a valued Boeing customer over the past few decades and we are honored that they continue to introduce new Boeing widebody airplanes into their growing world-class fleet."

"EVA Airways has been a valued Boeing customer over the past few decades and we are honored that they continue to introduce new Boeing widebody airplanes into their growing world-class fleet."

The airline is looking forward to expand its presence in new markets, mainly in Southeast Asia, Oceania and North America.

At present, it has more than 37 Boeing aircraft in its fleet including 21 777-300ERs, which is considered to be the backbone of EVA Airways.

Last July, EVA Air signed a purchase agreement with Boeing for five 777 freighters, the delivery of the first 777 freighter is scheduled in 2017 and all the five will be in operation by 2019.

EVA’s Boeing 777 freighters expected to carry as much as 102 tonne payload.