X
Advertise with us
Mrinmoyee 26 October 2015 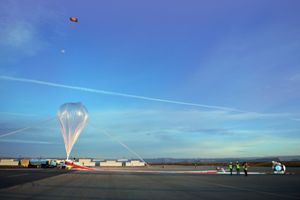 The company aims to meet its goal for manned private flights to the edge of space by 2017.

The test flight carried a scale down model of its flight capsule under a huge balloon that travelled to a final altitude of 100,475ft, successfully marking the transition from sub-scale to full scale testing.

After reaching its final height, a system detached the capsule from the balloon to begin a controlled descent to a landing site using a proprietary parafoil, which is similar to a steerable parachute.

World View tested the system before, although the latest flight was the first to feature a single flight that covered the proposed commercial service from launch to landing.

"This test flight is symbolic of a major step towards a new era of accessible space travel for us all."

The test is to prove that commercial flight to the edge of space via high-altitude balloon will be viable and major form of transport in the emerging private space travel industry.

The company plans to voyage to the edge of space from Page, Arizona among other locations.

World View co-founder Jane Poynter said: "Our team is comprised of some of the best aerospace engineers in the world and they’ve achieved some major technological advancements in the last few months.

"Those efforts have resulted in new and innovative technologies that will, without a doubt, make private travel to the edge of space routine in the years to come.

"This test flight is symbolic of a major step towards a new era of accessible space travel for us all."

Many team members of World View were part of the StratEx Space Dive programme that carried former Google executive Alan Eustace to 136,000ft beneath a high-altitude balloon last year.

World View is working to innovate on existing high-altitude ballooning technology in order to develop a human-rated flight system that allows a flawless launch, gentle ride and pinpoint landing.