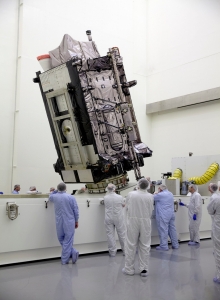 Lockheed Martin has announced its prototype of the next-generation global positioning system (GPS) satellite, the GPS III, has completed successful testing for backward-compatibility with the previous GPS satellite constellation in orbit.

The GPS III Nonflight Satellite Testbed (GNST), a full-sized, functional satellite prototype, is currently at Cape Canaveral Air Force Station in the US.

During the trials in October, GNST was successful in communicating through cross-links with air force flight-like hardware simulators for the GPS IIR, GPS IIR-M, and GPS IIF satellites in orbit.

This testing also showed the ability of an air force receiver to track navigation signals from the GNST.

A vital programme for the air force, GPS III is a cost-effective solution for ageing GPS satellites in orbit, and will improve ability to address the growing demands of military, commercial and civilian users.

According to Lockheed Martin, GPS III satellites will offer three times improved accuracy and up to eight times more powerful anti-jamming capabilities, and include enhancements to extend spacecraft life by 25%, compared with the existing GPS block.

"This provides early confidence in the GPS III’s design to bring advanced capabilities to our nation, while also being backward-compatible."

In addition, it will be the first GPS satellite featuring a new L1C civil signal created to make it interoperable with other global navigation satellite systems.

Lockheed Martin is currently under contract to produce the first four GPS III satellites (SV 01-04), and has secured advanced procurement funding for long-lead components for the fifth, sixth, seventh, and eighth satellites (SV 05-08).

The first flight-ready GPS III satellite is expected to arrive at Cape Canaveral next year, with launch scheduled by the air force for 2015.

The GNST arrived at the air force station in July to test facilities and pre-launch processes.

On 30 August, the satellite prototype successfully established remote connectivity and communicated with the GPS next-generation operational control system (OCX) that is being developed by Raytheon.