Range with a 47t payload

Range with a 40t payload

Range with a 26t payload 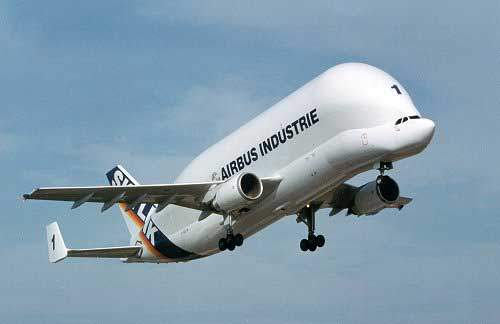 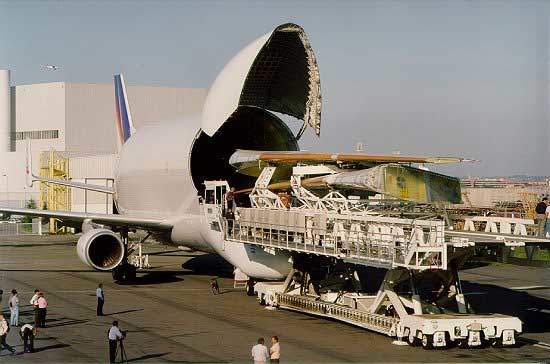 Airbus uses Beluga aircraft for transporting large assembled sections of the fuselage and wings of aircraft." 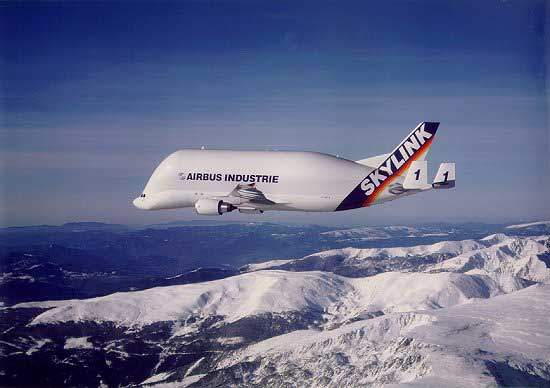 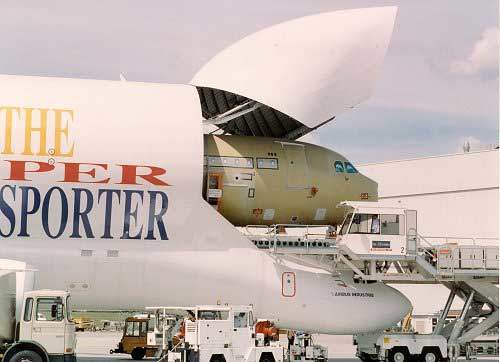 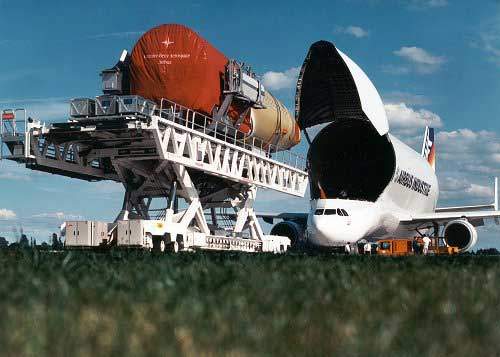 The Beluga has also carried the aluminium fuel tank for a spacecraft and a space station payload for NASA. 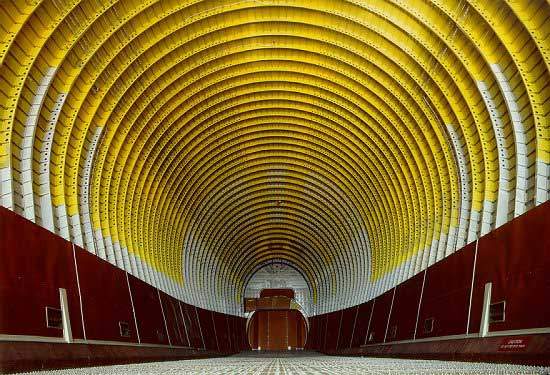 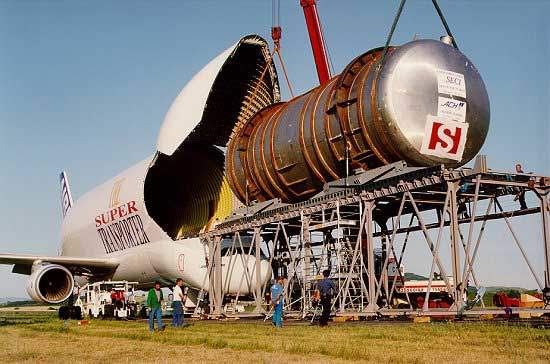 The Beluga has been used to transport a chemical tank and its supports weighing 45t. 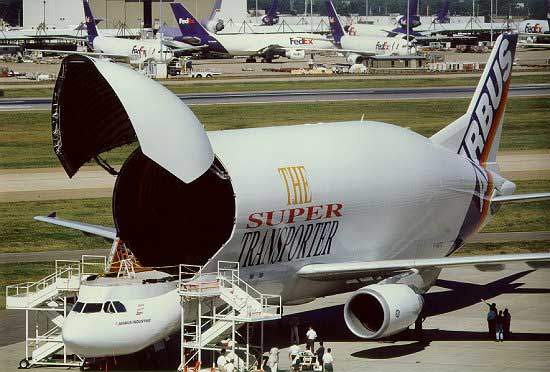 The Beluga is capable of carrying loads up to 47t over a distance of 900 nautical miles. 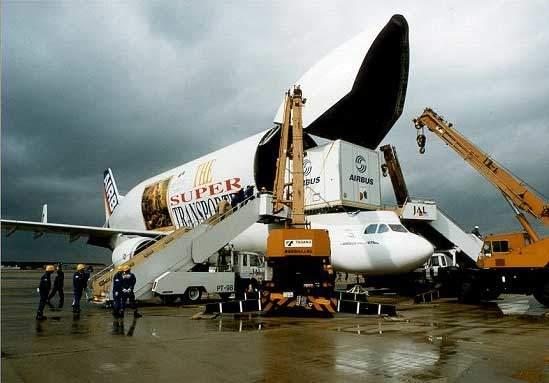 Beluga has regularly transported the fuselage of an A340, the wings of the Airbus A340 or two wingsets of the A320. 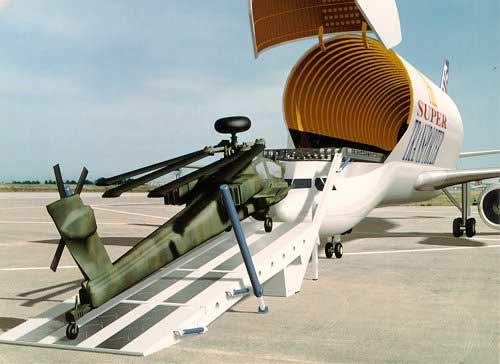 Beluga being loaded with a helicopter.

Airbus developed the Beluga as a successor to the Super Guppy, initially for Airbus’ own manufacturing needs. Currently, Airbus uses four or five Beluga aircraft for transporting large assembled sections of the fuselage and wings of aircraft. The fifth Beluga serves as a back up for Airbus and is also offered to fulfil transport services in the market outside Airbus. In order to serve the additional market, Airbus Industrie created the subsidiary airline company Airbus Transport International (ATI) in 1996. ATI is based at Toulouse in France next to the Airbus production facilities. There are no current plans to sell the Beluga aircraft and there are not yet plans for the production of a sixth Beluga.

The Beluga has been used to transport space station elements, helicopters, works of art, humanitarian aid and, in July 2003, a number of vintage aircraft to an airshow in Wisconsin, USA, where it remained on static display. Recent transport missions carried out by the Beluga include the delivery of the Eutelsat W3A satellite, built by EADS Astrium, to the Baikonur Cosmodrome launch site in Kazakhstan in February 2004, and the airlift of the vertical tail plane for the first Airbus A380 from Hamburg, Germany, to the Airbus final assembly hall in Toulouse, France.

The position of the main deck allows easy roll on/roll off transfer of cargo. The flight deck of the Super Transporter is below the level of the main deck. The large single piece main cargo door swings forwards and upwards providing ample access to the cargo compartment. The cargo door has an access height of 16.78m.

The cargo hold is 7.08m high and 7.04m wide with a usable length of 37.70m. The cargo hold dimensions and the weight allowance means that the Beluga is capable of carrying two Chinook transport helicopters with blades folded and without having to disassemble and reassemble the helicopters.

As the main cargo deck is at a height of 5.5m from ground level, the Beluga needs to operate at airports with suitable ground handling facilities. A 100t cargo lifting platform, 32m long, and mounted on a 24 wheel chassis, has a load capacity of 50t. Airbus Transport International has completed the prototype development of an integrated loading ramp that allows the Beluga to operate on airfields without loading and unloading facilities.

The integrated loading ramp, 12m long and 5m wide, is of carbon composite construction. It is powered by the aircraft’s internal generator. The ramp can be operated by one man and can be deployed and folded back into position in 20mins. The tongue section of the loading ramp extends forwards from the main deck level towards the ground in front of the nose of the aircraft. The load is mounted onto the tongue section, which is then raised to the horizontal position level with the main cargo deck. The load is than moved onto the cargo deck inside the fuselage.

ATI specialises in carrying large heavy loads for Airbus, for governments and industry. For Airbus the Beluga has regularly transported the fuselage sections of an A340, the wings of the Airbus A340 or two wingsets of the A320.

In June 1997, Beluga was used to transport a chemical tank of 36t, 17.6m in length and 6.5m in diameter. The chemical tank and its supports weighed 45t. The Beluga transported the tank from Societe Europeenne de Chaudronnerie Industrielle (SECI) in Central France to Le Havre in Northwest France for installation on a ship. In a two-year period, Beluga carried 18 tanks.

The Beluga has carried large and delicate space systems, for example the aluminium fuel tank, 3,500kg and 9m in length, for the NASA X-33 Venture Star space craft. In 1999 the Beluga carried the Raffaello pressurised logistics module, a space station payload, from Italy to the Kennedy Space Station in Florida

In preparation for transportation by Beluga, the painting by Delacroix, entitled La Liberte Guidant le people, was installed in an isothermally protected pressurised tank. The load, 3.3m high and 3.9m long, was transported from France to Tokyo, where the painting was displayed at the Tokyo National Museum in 1999.