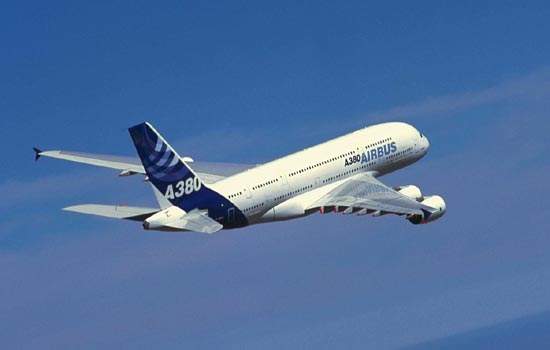 The first flight of the A380 (with the Rolls-Royce engines) took place from Blagnac Airport, Toulouse, in April 2005. 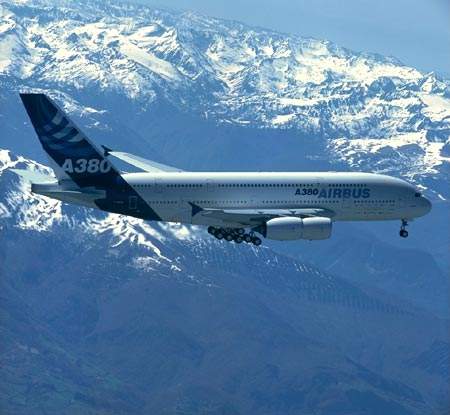 The A380 superjumbo, the world's first twin-deck, twin-aisle airliner. 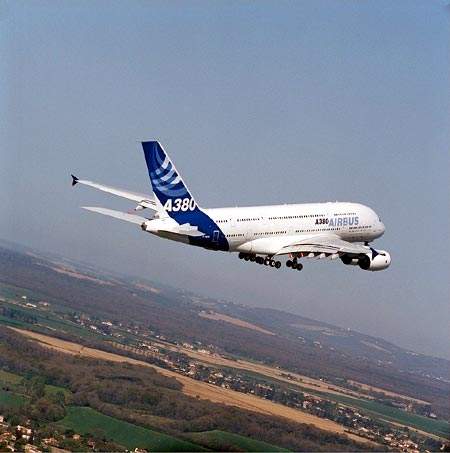 The A380 structure incorporates a range of new materials, including a new material, Glare, which is highly resistant to fatigue. 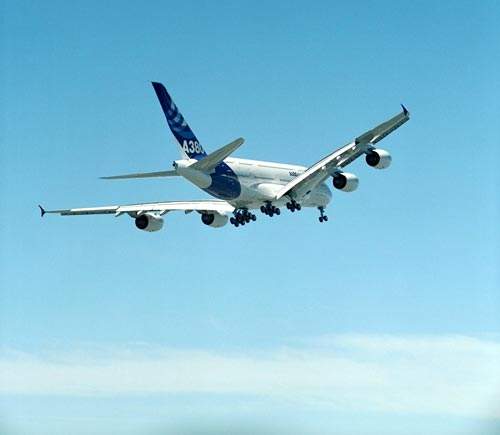 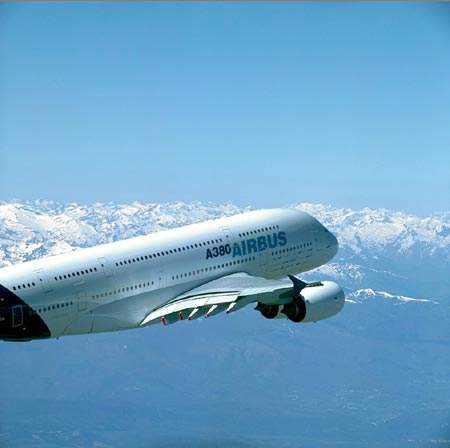 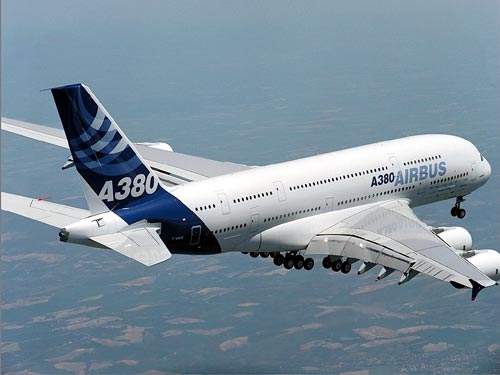 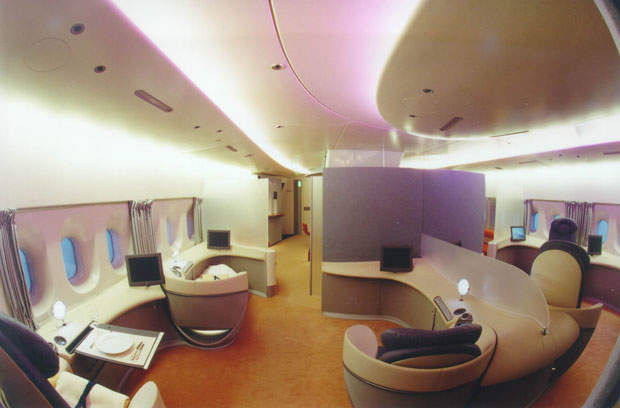 The twin-deck widebody of the roomy A380 means some airlines have requested onboard showers, an office, a children's play area, a gym, a bar, shops, a smoking area and a mini casino. 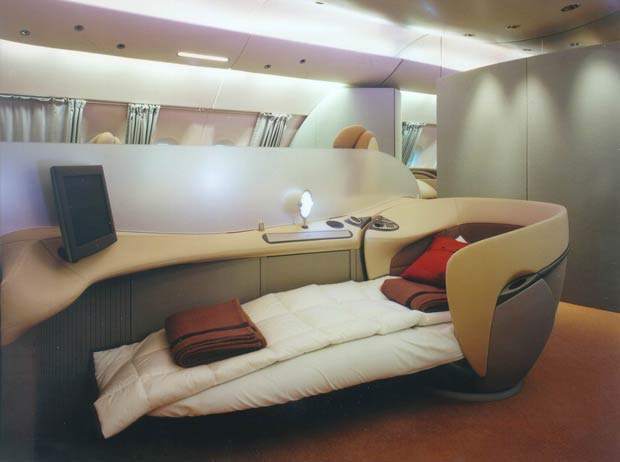 The size of the aircraft also allows for a surprising number of configurations for different airlines, such as these luxury beds. 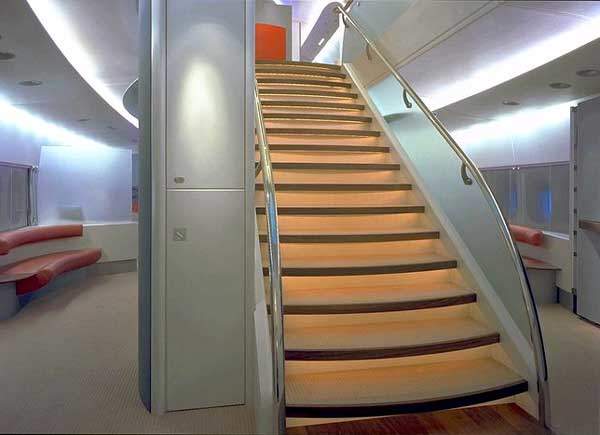 Stairs between the upper and lower decks.

Airbus’s superjumbo, the A380, is the world’s first twin-deck, twin-aisle airliner. Advantages of the A380 include lower fuel burn per seat and lower operating costs per seat.

The 555 seat Airbus A380-800, with a non-stop range of 8,000nm, was launched in December 2000. The aircraft began production in January 2002. The first flight (with Rolls-Royce engines) took place from Blagnac Airport, Toulouse, in April 2005. More than 100 test flights were completed before its first commercial flight was carried out by Singapore Airlines, from Singapore to Sydney, which took place on 25 October 2007.

Other test flights included one in October 2005, a third in November 2005, fourth in February 2006 and fifth in May 2006. One test aircraft took part in the flight display at the Farnborough International Airshow in July 2006.

Powered by Rolls-Royce Trent 900 engines, the A380 received joint European Aviation Safety Agency (EASA) and Federal Aviation Administration (FAA) Type Certification on 12 December 2006. In January 2007, Airbus became the first company to receive ISO 14001 environmental certification for its products. In March 2007, one A380 test aircraft flew to New York and one to Los Angeles, the first transatlantic flights of the A380.

In February 2012, the EASA ordered checks for possible cracks inside the aircraft’s wings on the entire global fleet of Airbus A380 superjumbo jets, under its second airworthiness directive. Aircraft which completed 1,216 to 1,384 flights were ordered for inspection. The EASA has also expressed concerns over the safety of aluminum rivets in the fuselage and suggested replacing them with titanium fasteners.

Airbus Industrie is a consortium formed by EADS and BAE Systems. EADS, the European Aeronautic Defence and Space Company, was formed by a merger of Aerospatiale-Matra of France, Daimler-Chrysler Aerospace of Germany and CASA of Spain (former members of Airbus). In October 2006, BAE Systems completed the sale of its shareholding to EADS, which is now the sole owner of Airbus.

The vessel was launched in July 2003 and had the largest water stern door (22m x 14m) ever built on a Ro Ro vessel. It took the components to Bordeaux. From there they were transported via specially constructed barges up the Garonne River and then transferred by road trailer to the final assembly line in Toulouse. A second Ro Ro vessel, the City of Hamburg, built at ST Marine in Singapore, was delivered on 4 December 2008, with another in early 2009.

Structure and construction of the superjumbo aircraft

In order to minimise the unladen weight, the Airbus A380 structures incorporate a range of new materials, as used on the A318 and A340 families of aircraft.

“Airbus’s newly designed superjumbo, the A380, is the world’s first twin-deck, twin-aisle airliner. Advantages of the A380 include lower fuel burn per seat and lower operating costs per seat.”

Carbon fibre-reinforced plastic is used for the central box of the wings, the horizontal stabilisers (which are the same size as the Airbus A310 wing), the fin, the rear fuselage section and for ceiling beams.

A new material, Glare, which is highly resistant to fatigue, is used in the construction of the panels for the upper fuselage. The aluminium and fibreglass layers of Glare do not allow propagation of cracks. It is much lighter than conventional materials and represents a weight saving of about 500kg in construction. Impact-resistant thermoplastics are used on the wing leading edge. The aircraft has 16 wing spoilers supplied by Patria of Finland.

The A380 incorporates two rather than three Eaton Corporation hydraulic systems, with increased hydraulic pressure of 5,000 pounds per square inch instead of a standard 3,000psi.

The A380 is a member of the Airbus Flight Operational Commonality family with similar flight decks and operating procedures across the A320, A330 and A340 aircraft, providing easy crew transition training, cross crew qualification and mixed fleet flying.

Twin-deck layout aboard the A380 aircraft

There are eight full-size doors on either side of the aircraft. On both sides, there are two doors on the main deck and one door on the upper deck forward of the wing, which can be used simultaneously for embarking or disembarking passengers. For speedy baggage transfers, two hold loading belts, one at the forward end and one at the rear end under the fuselage, can be used simultaneously.

Engines used on Airbus’s A380

The aircraft is equipped with four 70,000lb thrust engines, either the Rolls-Royce Trent 900 or the General Electric / Pratt & Whitney Engine Alliance GP7200. Rolls-Royce delivered the first Trent 900 engine in February 2004 and it made a successful first flight on an A340-300 test-bed in May 2004. The first test-bed flight of GP7200 was successfully completed on 4 December 2004.

The take-off length is 2,900m at maximum weight at sea level, ISA +15° conditions and the initial cruise altitude 35,000ft. The aircraft complies with the noise emission limits of ICAO (Chapter 3, Schedule 16) for overfly, approach and side-on manoeuvres and the stricter regulations of London Heathrow Airport, concerning take-off and landing. This enables aircraft operations at night.

There are ten fuel tanks with a capacity of 131,000l of fuel. Refuelling can be carried out in 40 minutes.

The aircraft can complete a 180° turn within a width of 56.5m, which is within the 60m width dimension of standard runways. Maximum operating speed is Mach 0.89 and the range is 15,000km or 8,000nm with the maximum number of passengers.

The turnaround time at the airport terminal, including passenger disembarking, cleaning, restocking and embarking the passengers for the next flight, is a minimum of 90 minutes.

The A380 is the first major commercial airliner programme with a freighter version being co-developed as part of the new aircraft launch. The A380-800F can transport 150t of freight using standard, interlineal containers and pallets. The full payload range of the A380-800 F is 5,600nm. Launch customers were FedEx (ten aircraft) and Emirates (two) with the first deliveries scheduled for 2012, behind the original schedule of 2008.

Initial Airbus A380 orders and deliveries

The first A380 was delivered to Singapore Airlines (SIA) on 15 October 2007, entering service on 25 October with a flight from Singapore to Sydney. SIA sold the tickets for the flight by online auction on eBay, with proceeds going to charity.

The first flight with the General Electric / Pratt & Whitney Engine Alliance GP7200 was in August 2006 and the A380, powered by the GP7200, received FAA and EASA certification in December 2007. Launch customer for the A380 with this engine was Emirates, with the first delivery in July 2008. Emirates launched the A380 on its Dubai to New York route in August 2008.

First delivery to Qantas was in September 2008. The airline commenced A380 services in October 2008. Airbus delivered 13 A380 aircraft in 2008 – five SIA, three to Qantas and four to Emirates.

Air France took delivery of its first Airbus A380 on 30 October 2009. It received the aircraft in a delivery ceremony which took place in Hamburg, Germany. Singapore Airlines was delivered the 11th A380 Airbus and Lufthansa’s second A380 in July 2010.

The 31 delivered A380s which are in service have completed up to 156,000 revenue flight hours during 17,000 flights. They have carried more than six million passengers to 20 international destinations.

Recent orders of the Airbus A380 internationally-used aircraft

In January 2012, Hong Kong Airlines confirmed an order for ten A380s with an estimated value of $3.8bn. On 17 November 2009, Air Austral ordered two Airbus A380s to accommodate 840 passengers in a single-class configuration.

In all, 25 orders had been received for the cargo version but, in November 2006, Federal Express announced the cancellation of its order for ten aircraft, citing delays in delivery dates as the cause and International Lease Finance has converted its order to the passenger version.

In March 2007, UPS announced its intention to cancel the freighter order. Airbus decided to halt the freighter programme until delays to the passenger version have been resolved.

In November 2007, the first order for the A380 Flying Palace, the VIP variation, was placed by HRH Prince Alwaleed bin Talal bin Abdulaziz Alsaud.

In February 2008, an Airbus A380 made the first flight of a commercial airliner using a liquid fuel processed from gas, GTL (gas to liquids), under the company’s alternative fuel research programme. One engine was fuelled with a blend of 40% GTL and standard jet fuel, the other three with standard fuel.