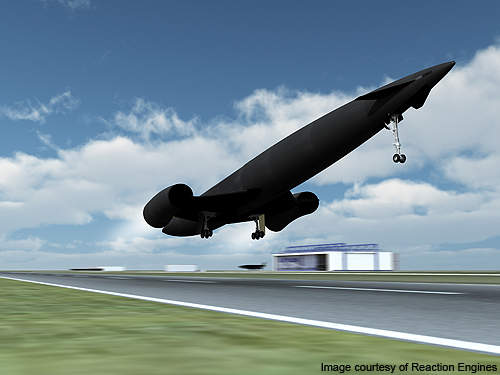 Artistic rendering of Skylon during its take-off from concrete runway. 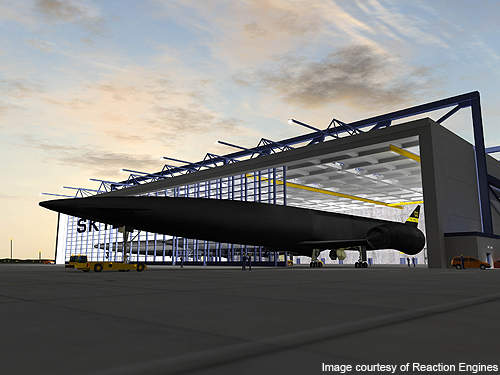 Graphic of Skylon at its hangar 2. 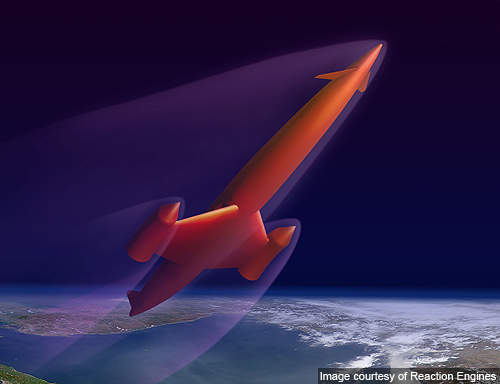 Skylon vehicle during its re-entry from LEO to ground station. 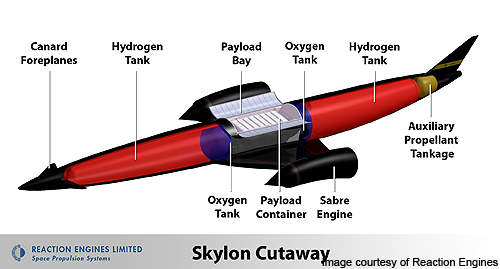 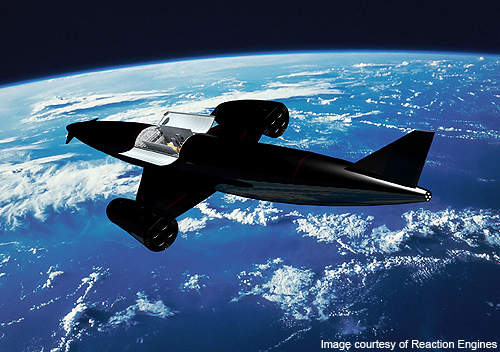 Artistic rendering of Skylon in space. 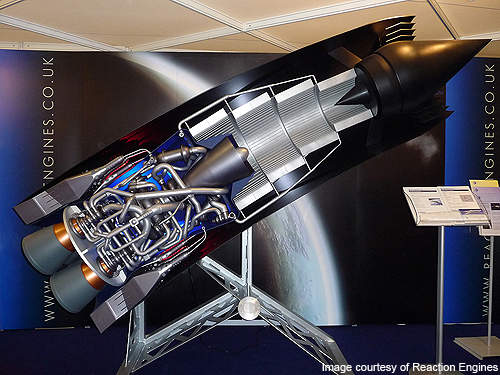 Skylon will be powered by two SABRE engines.

Breaking News: Building a spaceport could provide a welcome boost to the UK economy, operating as a hub for space tourism and space exploration, according to a new report from the Institute of Directors. 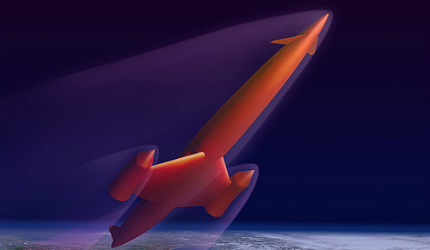 Skylon is an unmanned reusable cargo spacecraft being designed by UK-based Reaction Engines (REL) for the UK Space Agency (UKSA). The remotely controlled spaceplane will be derived from the HOTOL spacecraft that was launched in 1982.

The unmanned craft can transport 12,000kg of freight to the International Space Station (ISS). It is currently in the proof-of-concept phase and the total cost of its development programme is estimated to be $12bn.

The UKSA and the European Space Agency (ESA) unveiled a decision in February 2009 to provide €1m ($1.28m) of funding to build the SABRE engine to deploy in the Skylon by 2011.

REL asked the UK Government in January 2011 to offer extra funding support for the Skylon project. In May 2011, the ESA granted approval to design and manufacture the initial prototype of Skylon and the SABRE engine. The company will receive $350m in funding, provided the static tests of the engine’s precooler are successful.

Design of the unmanned spacecraft

The Skylon is being designed to take off from a robust concrete runway, climb into low Earth orbit (LEO) and fly back to the earth in a single stage. It will consume liquid hydrogen during take-off and liquid oxygen during ascent into orbit. It is being designed for 200 flights and will have capacity to store 66,000kg of liquid hydrogen and 150,000kg of liquid oxygen.

"The Skylon spacecraft will be powered by two SABRE engines."

The vehicle will operate in two modes: airbreathing mode and rocket mode. During airbreathing mode, it will attain a speed of Mach 5 at an altitude of 26,000m by collecting atmospheric air through two shock inlets. The atmospheric air entering the inlet will be heated up as it is compressed in the engine. It will be chilled to cryogenic temperatures before compression by a precool heat exchanger using liquid hydrogen and helium.

Before switching to rocket mode, the compressed air will be converted to vapour but not liquefied, to reduce fuel consumption for cooling.

The decrease of air density being inversely proportional to the altitude will allow the engine to switch to rocket mode. Pitch, yaw and roll control in rocket mode will be rendered by the combustion chambers. Liquid oxygen will be used to fuel the engines in the rocket mode and aid the spacecraft’s ascent to the orbit.

Upon arriving at the LEO, the vehicle ignites the onboard manoeuvring system (OMS) to disseminate the orbit. The payloads will be deployed in orbit after completing routine checkouts. Once the payload is released, the lightweight aircraft re-enters the atmosphere and lands back on the runway.

Heat radiation at altitude ranging between 90km and 60km during the re-entry stage will be intercepted from entering the vehicle by covering the fuselage with ceramic composites skin.

The Skylon will feature a thin fuselage comprising canard foreplanes, hydrogen tanks, oxygen tanks and auxiliary propellant tankage. It will be fitted with delta shaped wings along side midway fuselage and incorporate SABRE (synergistic air breathing rocket engine) on the axisymmetric nascelles of wingtips.

The vehicle will boast a payload bay with U-shaped cross section in the middle of fuselage section. The bay will comprise two interfaces, one at the front and another at rear. The front interface will be used to load cryogenic oxygen, hydrogen and helium. Both interfaces will be utilised to load payloads. The length and diameter of the bay will be 12.3m and 4.6m respectively.

The spacecraft can conciliate 40ft-long cargo containers in the payload bay for space transport missions. A passenger cabin module is also planned to be placed in the bay to carry 30 to 40 passengers upon receiving endurance certification.

The fuselage and wing structure will be constructed with carbon fibre strengthened plastics. It will comprise stringers, frames, ribs and spars developed as warren girder constructions. The aeroshell will be made up of fibre built ceramic.

"The Skylon spacecraft can transport 12,000kg of freight into International Space Station."

The vehicle will also carry propellant tanks, a water tank, fuel tanks and combustion chambers. It can launch satellites or fluid cargo into LEO.

The Skylon will powered by two SABRE engines, which operate as conventional jet engine as well as rocket motor. The SABRE engine is being designed based on liquid air cycle engine (LACE) technology.

Despite chilling the air at the shock inlet, the engine gets overheated at speeds beyond Mach 5. To solve this issue, the inlet will be closed and on-board liquid oxygen and hydrogen fuel employed to ascend the vehicle into the ISS.

Landing gear of the UKSA’s Skylon

Skylon will be fitted with a retractable landing gear comprising high pressure tires and water cooled brakes. The undercarriage will feature a closely packed wheel assembly to save weight and interior space when the wheels retract into the fuselage section.

The vehicle will be fitted with water boiling tank to dissipate the heat generated when brakes are applied to stop the vehicle during its take-off. The water will be chucked out from the tank after take-off, to decrease the weight of the landing gear.