X
Advertise with us
Akanksha 9 October 2013 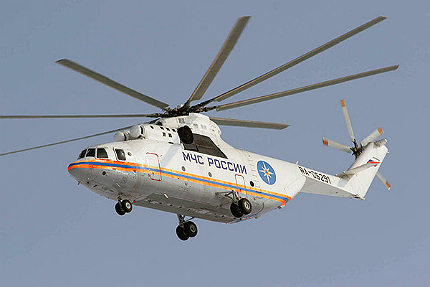 The Mi-26, popularly known as Halo, is the world’s largest helicopter in production. It is a twin-turbine heavy-lift helicopter designed and produced by Russian Mil Moscow Helicopter Plant.

Since its debut at the Paris Air Show in 1981, the Halo has been sold to 20 countries around the world. The helicopter is used for both military and civilian missions and is available in 13 variants, which can lift up to 56,000kg.

The load-carrying capacity of the Halo is comparable to that of a domestic C-130 transport aircraft, and has a cargo area 12m long and 3.3m wide, which can accommodate two combat vehicles weighing up to 9,988kg. The interiors have space to seat 80 combat-equipped troops or 60 stretchers. The flight deck can accommodate four crew including pilot, copilot, flight engineer and navigator.

The development of the Mi-26 began in the early 1970s with the ambitious goal of producing a helicopter with double the load capacity of any other helicopter. India was the first foreign country to purchase a Halo.

Service entry of Mi-10 was in 1962. The helicopter retained many of the equipment and systems, including the engines, transmission and rotor system.

The slim fuselage sitting on four tall undercarriage legs allows the Mi-10 to taxi over bulky loads. The helicopter has a maximum takeoff weight of 43,700kg (96,340lb) and can seat up to 28 passengers inside the cabin.

The Mi-10 is equipped with two Soloviev D-25V turboshaft engines, each developing a maximum power output of 4,100kW (5,500hp). The large external fuel tanks aboard the Mi-10 provide a maximum range of about 430km.

The Mi-6 (Nato code name: Hook) was the world’s biggest helicopter when it took in to skies for the first time in 1957. Developed to cater the civil and military requirements, more than 900 Mi-6 helicopters were built by Mil Moscow Helicopter Plant before production ceased in 1981.

The large fuselage of Mi-6 provides enough space to accommodate 65 armed troops or 41 litter patients, plus two attendees, and can also carry a range of heavy cargo including vehicles. The helicopter has a maximum take-off weight of 42,500kg (93,700 lb).

The Mi-6 helicopter is powered by two Soloviev D-25V turboshaft engines mounted atop the fuselage midsection. Each engine is capable of developing a maximum power of 4,100kW (5,500shp).

The CH-53 Super Stallion is a development of CH-53 Sea Stallion heavy-lift cargo helicopter. It is currently the largest helicopter in service with the US armed forces.

Designed with a lifting capacity of more than 33t, the CH-53 can lift a155mm howitzer along with its crew and ammunition.

The Super Stallion helicopter is in service with the heavy lift helicopter squadrons of the US Marine Corps, forming a vital element of the composite squadrons supplying heavy cargo and supplies for amphibious assault missions.

The V-22 Osprey, produced as part of a strategic alliance between Bell Helicopter and Boeing, is a unique helicopter with multimission ability. It is a high speed plane that allows for quick transportation of crew or cargo. It can accommodate 24 combat troops or up to 15,876kg (35,000lbs) of internal and external cargo.

Osprey was designed to meet the specific requirements of four US armed services. It is a tilt-rotor aircraft that takes off and lands similar to a helicopter. It can land or take off vertically and reach high altitude at high speeds of up to 280kt.

It is fitted with two powerful Rolls-Royce engines whose nacelle can be rotated to convert the aircraft into a turboprop plane. The engines develop a power of 6,150shp each. It is capable of air-to-air refuelling and can be compactly stored on board an assault ship or aircraft carrier, thanks to the rotatable wings and foldable rotors.

The CH-47 Chinook is a heavy-lift helicopter from Boeing. The Chinook can perform multiple transport missions. It was introduced into service in 1962 and is available in a number of variants.

Some of the notable missions in which Chinooks were used include the Gulf War and Operations Desert Shield and Desert Storm. The empty weight of CH-47D/F Chinook is 10,614kg (23,401lb). The maximum weight at take off is 22,679kg (50,000lb). The helicopter is powered by two Textron Lycoming T55-L712 engines.

The Aircrane was the first flying crane helicopter built with an aft-facing pilot station. The helicopter is 26.97m in length. It has a six-blade main rotor with a diameter of 21.95m and a four-bladed tail rotor. The maximum takeoff weight of the helicopter is 19,050kg (42,000lb).

The Mi-38 is a multirole helicopter also developed by Mil Moscow Helicopters Plant, which can be used in cargo and passenger transport, search-and-rescue, offshore missions and for air ambulance services. Its robust build and flexible configuration enables operations in versatile environments, such as maritime, tropical and cold.

The fuselage of the Mi-38 is built of high-strength composite materials. The cabin is large and unobstructed with an area of 16m². It can accommodate 30 passengers in transport missions and 16 stretchers when used as a hospital. The flight deck can accommodate two pilots. A single pilot can fly the helicopter in cargo configuration.

The power plant of the Mi-38 comprises of two Klimov TV7-117V engines. The helicopter weighs approximately 8,300kg and has a maximum take-off weight of 15,600kg.

AC313 from Avicopter is the biggest civilian helicopter ever built in China. The helicopter is based on Harbin Z-8, which itself is a derivative of the Aerospatiale Super Frelon helicopter. Avicopter AC313 was granted type certificate by the Civil Aviation Administration of China (CAAC) in January 2012e.

The Avicopter AC313 can be deployed in search and rescue (SAR), maritime surveillance, fire fighting, offshore oil and gas support, cargo transport and medical evacuation missions. The AC313 is the second rotorcraft capable of operating in the Qinghai-Tibet Plateau, after the Sikorsky S-70C Black Hawk.

The AC313’s power-plant includes three Pratt & Whitney PT6B-67A engines. The typical seating arrangement can accommodate two crew members and up to 27 passengers. It has a maximum range of 900km and can carry a maximum payload of 13.8t.

CH-46 Sea Knight is a medium-lift twin turbine tandem rotor transport helicopter originally produced by Vertol, a company based in the US. The Sea Knight was added to Boeing’s crown, following Vertol’s takeover by Boeing in 1960.

The CH-46A was designed exclusively for the US Marine Corps in 1961 in a design competition for a medium assault transport helicopter. The helicopter is also available in a civilian variant known as BV-107 II. The first CH-64A helicopter was used during the Vietnam War in 1965.