Three (Two pilots and one engineer)

Length at Floor Level, Not Including Ramp 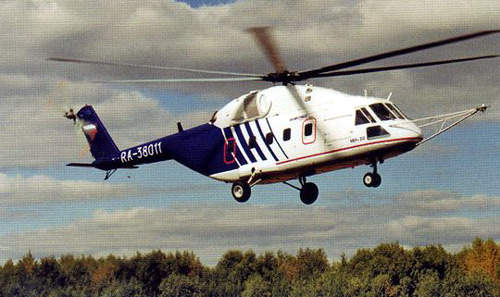 The maiden flight of the Mi-38 took place in October 2004 with a 750km flight from Kazan to Moscow. 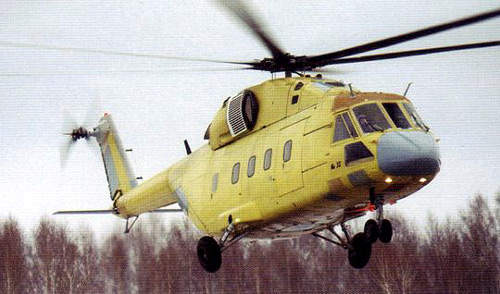 The Mi-38 is capable of fulfilling a variety of missions including utility, heavy lifting and VIP transport. It can fit up to 30 passengers and has an internal payload of 5t and an external payload of 7t. 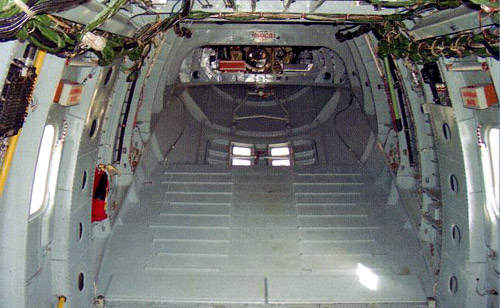 The cargo ramp of the Mi-38 configured for cargo transport. 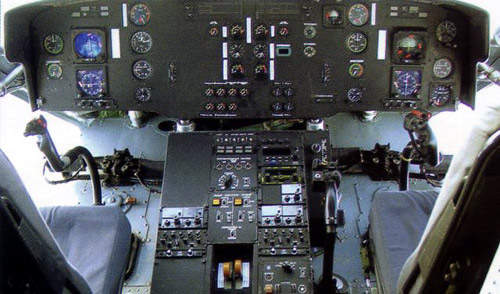 The cockpit instrument panel of the Mi-38 prototype. 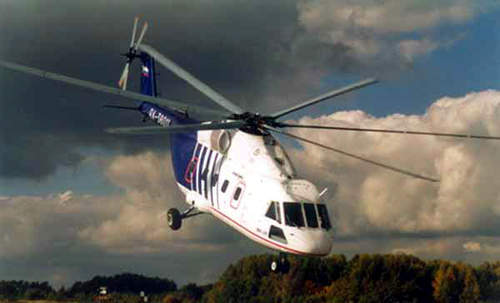 The Mi-38 medium transport helicopter can operate by day or night and in environments with temperatures from –60&deg;C to +50&deg;C. 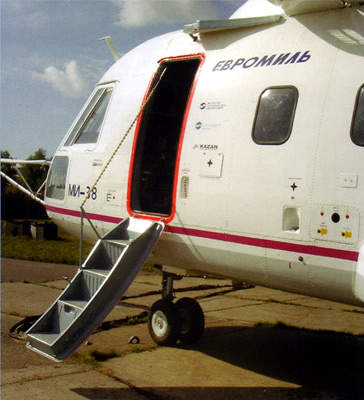 In the Mi-38 VIP / passenger version, a ramp door is fitted. 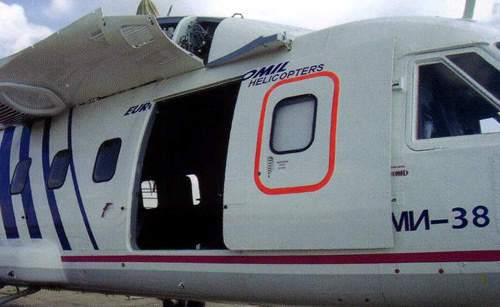 The starboard sliding door of the Mi-38 cargo transport variant.

The Mi-38 medium transport helicopter can operate by day or night and in environments with temperatures from –60°C to +50°C. It is capable of fulfilling a variety of missions including utility, oil exploration, heavy lifting and VIP transport. It can fit up to 30 passengers and has an internal payload of 5t and an external payload of up to 7t.

The maiden flight of the Mi-38 took place in October 2004 with a 750km flight from Kazan to Moscow. The helicopter completed manufacturer's trials in 2007. The certification programme is under way and entry into service is planned for 2012.

In 1999, Mil Moscow Helicopter Plant, Kazan Helicopters and Eurocopter, joint members of the Euromil joint stock company, agreed a programme to complete the development, production and marketing of the Mi-38 helicopter.

Eurocopter withdrew from the programme in 2003.

“The Mi-38 medium transport helicopter can operate by day or night.”

The two-pilot flight deck is equipped with an avionics suite developed by Thales with ZAO Transas with five multifunction colour displays.

The cockpit and cabin are fully air conditioned. The air conditioning operates by compressor bleed air in flight and by the auxiliary power unit on the ground.

The cabin can be configured for passenger or VIP transport, cargo or mixed cargo and passenger transport, air ambulance and emergency evacuation, surveillance and other missions. There is a portside ramp door for passengers.

As a passenger transport the cabin can seat 30 passengers. In the ambulance version, the Mi-38 can accommodate 16 stretchers.

The helicopter can be flown by a single pilot for cargo transportation.

The cabin has a large flat unobstructed floor area of 16m², large rear-loading clamshell doors and an hydraulically operated and remotely controlled cargo ramp for rapid and easy loading of bulky cargo. A hoist can be installed over the cabin door on the port side. The ramp and the door are fitted with a roller conveyer. A powered hoist is installed on overhead rails in the roof of the cabin.

The helicopter is equipped with a cargo sling and can carry external loads up to 7t and internal payloads to 5t with a cargo area of 29.5m³. For cargo transport the helicopter is equipped with a television camera and display for monitoring the loading of cargo and the slung loads. Sensors can be fitted for checking the weight of slung loads and the weight and weight distribution of cargo loaded internally.

The hatch in the cabin floor allows tactical cargo airdrop from the cabin. The hatch can be replaced with windows and surveillance cameras and other sensor systems for surveillance missions.

The Mi-38 is of conventional pod and boom construction. The fuselage is mainly of high-strength composite construction.

“In the ambulance version, the
Mi-38 can accommodate 16 stretchers.”

Kazan designed the composite main and tail rotors. The six main rotor blades have an exaggerated twist and swept tips and are fitted with an electrical de-icing system. The tail rotor is unusual in consisting of two independent two bladed tail rotors on a single shaft. Stupino developed the titanium main rotor head with elastomeric bearings.

A contract has been placed on Krasny Oktyabr for the development and manufacture of the helicopter's transmission system.

The bladder fuel tanks are installed under the main cabin floor. Auxiliary fuel tanks can be fitted externally for extended range operations. Each engine is fitted with an independent fuel delivery system with automatic crossfeed.

The helicopter features a high level of built-in redundancy. Each of the three independent hydraulic systems is capable of controlling the helicopter. The electrical system has three separate AC generators and two batteries. The VD-100 auxiliary power unit is installed in the forward part of the cowling.