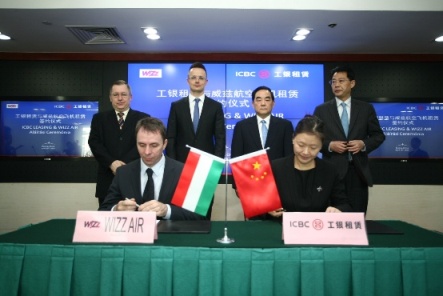 The A320 can accommodate 150 passengers in a two-class cabin or up to 180 in a high-density layout for low-cost and charter flights, according to Airbus.

Wizz Air chief executive officer József Váradi said the company was pleased to expand its existing group of leasing companies and announce the first financing deal with ICBC Leasing, the largest ever between Hungary and China.

"The addition of these eight new aircraft will contribute to the growth capacity of the airline and maintain the average age of our fleet, just under four years, one of the youngest of all European airlines," Váradi said.

State secretary for foreign affairs and external economic relations of Hungary Péter Szijjártó said the expansion of the Wizz Air fleet coincided with the foreign policy and trade objectives of Hungary.

“The addition of these eight new aircraft will contribute to the growth capacity of the airline and maintain the average age of our fleet."

"The interest of the Hungarian Government is to see to it that as many businessmen and tourists as possible come to Hungary, using the most direct means and the best services available," Szijjártó added.

ICBC Financial Leasing chief executive officer Cong Lin added that this was the company’s first deal in the Central and Eastern European region.

ICBC Leasing, the financial leasing arm of the Industrial and Commercial Bank of China, owns 94 aeroplanes and assets of at least JPY130bn ($20.8bn).

Image: Wizz Air stated that the financing deal with ICBC Leasing is the biggest ever between Hungary and China. Photo: courtesy of Wizz Air.