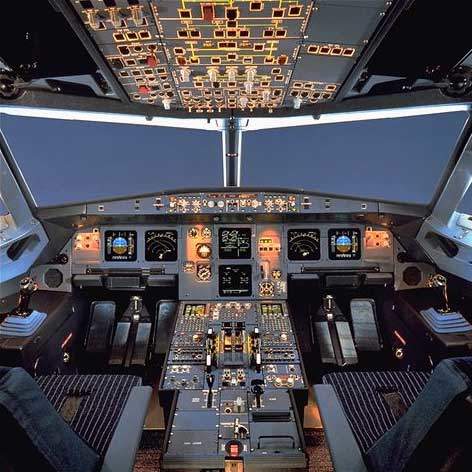 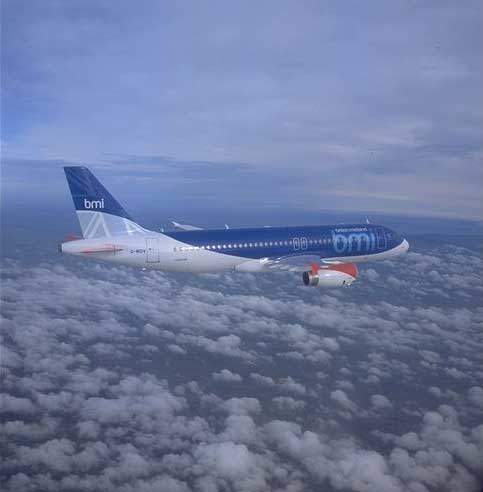 The A320 aircraft is fitted with fly-by-wire controls, each pilot having a sidestick controller.

A320 in service with Condor Flugdienst (now Thomas Cook Airlines) of Germany. 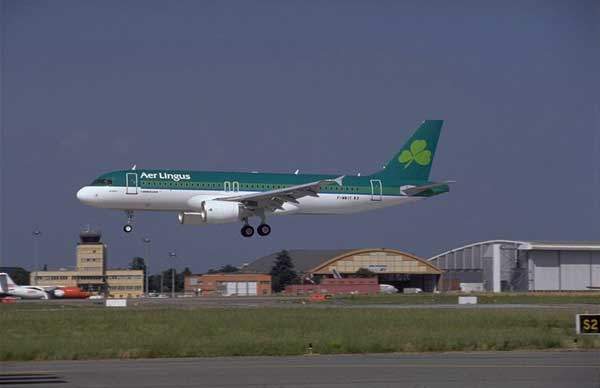 A320 operated by Aer Lingus of Ireland, coming in to land. 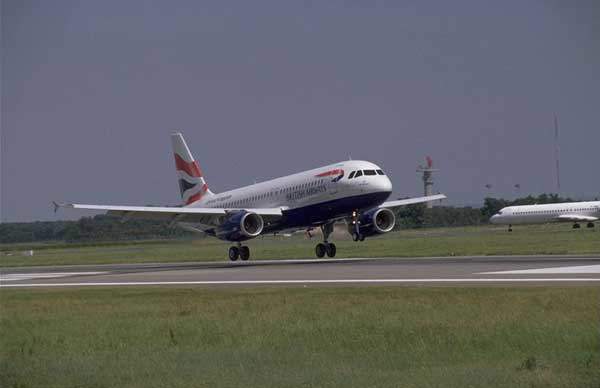 A320 in the livery of British Airways. 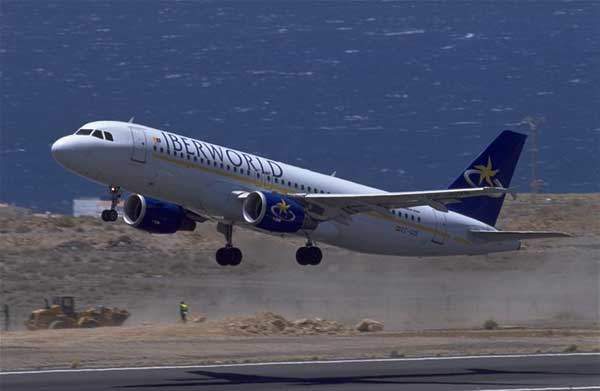 A320 in service with Iberworld of Spain, taking off. 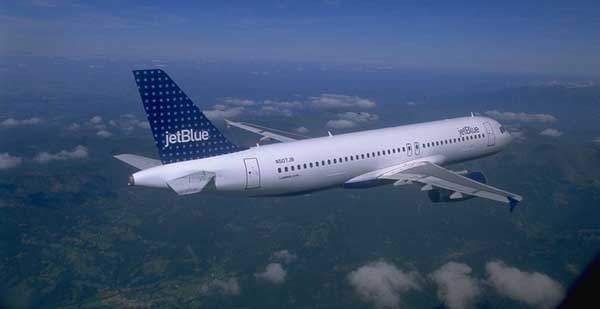 The fuselage of the A320 is of composite construction with aramid fibre, glass fibre and carbon fibre-reinforced plastics. 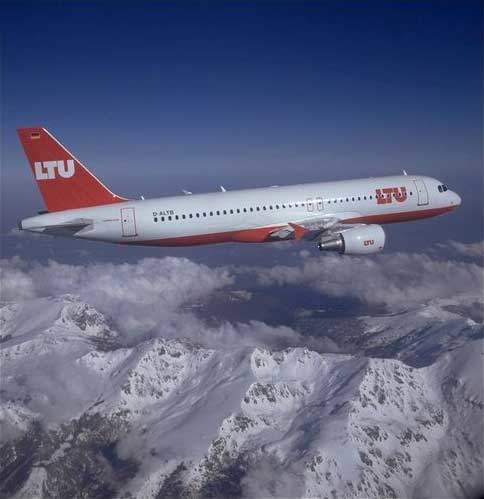 The Airbus A320 single-aisle medium-range airliner first entered service in 1988 and more than 5,000 aircraft of the A320 family are in service today, with more than 8,600 ordered.

Airbus Industrie is a consortium formed by EADS and BAE Systems. EADS, the European Aeronautic Defence and Space Company, was formed by a merger of Aerospatiale-Matra of France, Daimler-Chrysler Aerospace of Germany and CASA of Spain (former members of Airbus).

In October 2006, BAE Systems completed the sale of its shareholding to EADS, which is now the sole owner of Airbus.

A320 orders and deliveries

“The Airbus A320 single-aisle medium-range airliner first entered service in 1988 and more than 5,000 aircraft of the A320 family are in service today, with more than 8,600 ordered.”

In December 2007, AirAsia, based in Malaysia, placed an order for an additional 25 A320 aircraft, increasing its future fleet to 175 A320 aircraft.

In June 2007, Airbus set up a joint venture with a consortium of Chinese companies for the setting up of a final assembly line for A320 family aircraft in Tianjin. Aircraft assembly began in August 2008 and the first aircraft assembled in China was delivered in June 2009 to Sichuan Airlines. The 50th A320 jetliner assembled at the Tianjin was delivered to Shanghai-based Juneyao Airlines in June 2011. China Aviation Supplies Import and Export Group (CASGC) placed an order for 110 A320s in February 2008.

A total of 88 A320s were ordered jointly by China Aviation Supplies (CAS) and Industrial and Commercial Bank of China (ICBC) Leasing in June 2011. The orders include 46 aircraft for CAS and 42 for ICBC Leasing.

Lufthansa ordered 25 A320neo and five A321 jetliners in July 2011. The A320neo to be deployed in the Lufthansa group will feature advanced Pratt & Whitney PW1100G turbofan engines.

ALAFCO placed an order for 35 A320neo aircraft in February 2012. Airbus also received an order in February for 75 A320, including 45 A320neos from Spirit Airlines.

In July 2012, UTair signed a contract to procure 20 A321 aircraft. Middle East Airlines-Air Liban (MEA) signed a Memorandum of Understanding (MoU) for five A320neo and five A321neo aircraft, with eight options during the same month.

The production rate of the A320 family is currently 34 a month. It is expected to rise to 42 a month in the fourth quarter of 2012.

The A320 includes a wide single-aisle cabin of 155.5in (3.94m). It has large above head bins including fly-by-wire technology. Spacious cargo hold is provided. The aircraft is fitted with large doors to help in loading and unloading of goods.

The new winglets named ‘sharklets’, produced by Korean Air Aerospace, are being added to A320 family from 2012. These will reduce fuel usage by approximately 3%. These will also increase the payload to 500kg and increase the range of the aircraft by 100nm at the actual payload. This also reduces CO2 of 700t for each aircraft annually.

The flight deck is fitted with two seats, one for each pilot, with primary flight and navigation displays for the Thales / VDO electronic flight and information system, (EFIS). The primary flight display shows speed, altitude and heading data. In the centre section between the pilot’s and co-pilot’s instrument displays are two Thales / VDO electronic central aircraft monitor displays.

The aircraft is the first subsonic commercial aircraft to be fitted with fly-by-wire controls. Instead of having a central control column and aileron wheel, each pilot has a sidestick controller.

All the primary and secondary flight controls operate by a combination of electronic signalling and hydraulic jacks. Very high safety standards were built into the flight control systems, including extensive system redundancy.

Flight envelope protection is embedded in the flight control system that will not allow manoeuvres to exceed the aircraft’s structural and aerodynamic limitations. It is, for example not possible for the aircraft to exceed the designated g-limits nor to fly beyond the maximum operating speed for longer than a few seconds.

The aircraft’s flight speed is maintained above the stall speed even if the pilot were holding the sidestick fully back, and the throttles are automatically opened to achieve a successful positive climb.

The aircraft is offered with two IAE V2500 engines or two CFM International CFM 56-5 developing 111kN to 120kN. The fuel tanks have a capacity of 23,860l giving the aircraft a range of 5,000km with the maximum number of passengers.

BAE Systems has subcontracted the building of the wing root shroud box to Mitsubishi. The completed aircraft sections are transported to France for assembly.

The main cabin has two passenger doors on the port side and service doors on the starboard side. The cargo hold has a capacity of 27.69m³ and can hold bulk cargo or containers. Up to seven 46in-high LD3W containers can be carried, three in the forward hold and four in the aft hold.