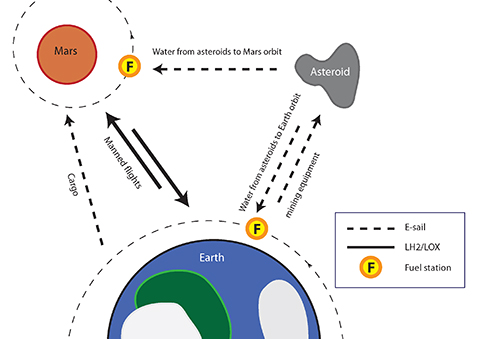 Researchers from Finland have identified a new way to use asteroid-mined water to power future manned space flights between Earth and Mars.

Finnish Meteorological Institute research manager Pekka Janhunen and the team said that the E-sail can transport a mining unit on to a water bearing asteroid to extract water from the soil.

"The asteroid-mined water can also used as radiation shielding of the manned module there by reducing the launch mass."

By heating the water bearing material, the water vapour will be condensed in a cool container, which will be transported to the orbit of Mars or Earth to split into hydrogen and oxygen and liquefied.

The liquid hydrogen / oxygen (LH2 / LOX) fuel can be used to power the manned vehicles in space. Intermediate fuelling the rockets helps reduce the launch mass.

According to researchers, the asteroid-mined water can also used as radiation shielding of the manned module there by reducing the launch mass.

The propellant could also facilitate propulsive landing on Mars without the need of an expensive heat shield.

While offering an economically sustainable way to approach manned Mars flights, the running costs of the electric solar wind sail facilitated manned Mars initiative (EMMI) are estimated to be almost similar to that of maintaining the International Space Station.

Image: The E-sail will transport a mining unit on to a asteroid to extract water, which will be converted into fuel for manned space vehicles. Photo: courtesy of Finnish Meteorological Institute.