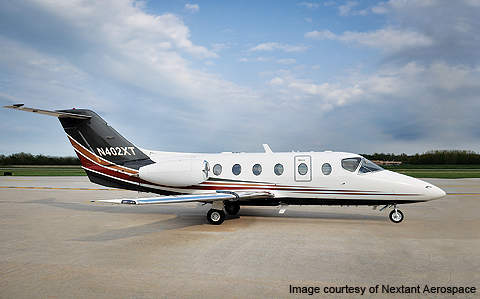 Nextant 400XT is designed and built by Nextant Aerospace. 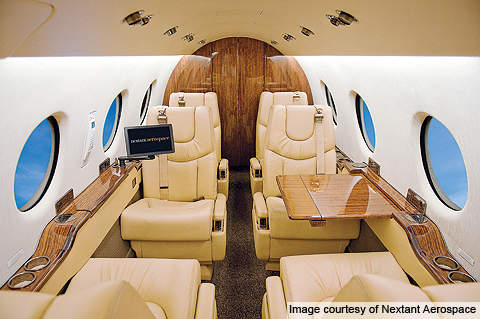 The spacious cabin of the 400XT accommodates eight passengers. 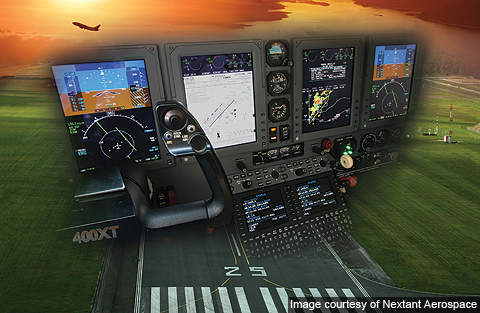 Graphic image of the 400XT's flight control and information systems.

The Nextant 400XT is a single-engine light business jet designed and manufactured by US-based Nextant Aerospace to operate on domestic and international air routes. It is an extended version of the Beechjet 400A business jet.

“The Nextant 400XT is a single-engine light business jet.”

The 400XT took off for its maiden flight from Cuyahoga County Airport in September 2010.

The aircraft received US Federal Aviation Administration (FAA) approval in October 2011 and European certification was granted in December 2012.

Nextant Aerospace unveiled the 400XT Business Jet at the 11th Annual European Business Aviation Convention and Exhibition (EBACE), held between 17 and 19 May 2011 in Geneva, Switzerland.

Flight Options awarded a $150m contract to Nextant Aerospace in October 2010 for the supply of 40 400XT jets. The first aircraft was delivered to Flight Options in October 2011 at the 64th National Business Aviation Association (NBAA) Annual Meeting and Convention.

Nextant Aerospace delivered its 16th 400XT business jet to a customer in the Czech Republic in August 2012.

Design and development of the US manufactured business jet

Nextant Aerospace designed the 400XT by making several modifications to the Beechjet 400A. The FJ44-3AP propulsion was used in place of the Pratt & Whitney engine of the 400A.

New features are incorporated, such as an upgraded avionics suite, new engine nacelles, pylons, engine cowling, engine beam and mounting systems, along with a horizontal stabiliser.

EMTEQ signed a contract with Nextant Aerospace in September 2010 to provide an interior lighting solution for the Nextant 400XT modernisation programme. The company installed ELW30 LED wash lights in the aircraft to produce bright, coherent lighting.

Rockwell Collins was awarded a $3m contract by Nextant Aerospace in October 2010 to supply a ProLine 21 avionics suite for the 400XT. These kits decrease the workload of the flight crew while reducing the aircraft’s maintenance costs by 30% and weight by 75lb (34kg).

The 400XT is equipped with a ProLine 21 avionics suite. The flight deck consists of two LCD-compatible primary flight displays, one multifunction display to show the navigation, flight instrumentation, fuel and engine data to the pilot.

The 400XT features a roomy cabin to accommodate eight passengers in two seating areas. The cabin was designed to give passengers with in-flight access to 53.2ft³ of available volume in the baggage compartment.

The cabin features cabin management systems, an in-flight entertainment system, LED lighting and an Aircell Access 4000 voice and data communication system. It can be divided into two layouts, namely business and executive.

The executive layout comprises six seats, refreshments galley on the left, baggage on the right and belted lavatory seat in the rear compartment. The cabin baggage volume is 32ft³ and the total baggage volume is 58.4ft³.

“The 400XT took off for its maiden flight from Cuyahoga County Airport in September 2010.”

The engine is designed and built by Williams International, US. The FADEC compatible engine generates a high thrust to weight ratio and decreases fuel consumption as well as operational costs.

The length and fan diameter of the engine are 1.58m and 0.58m, respectively. The dry weight is 239kg. The time between overhaul of the engine is 4,000 hours.