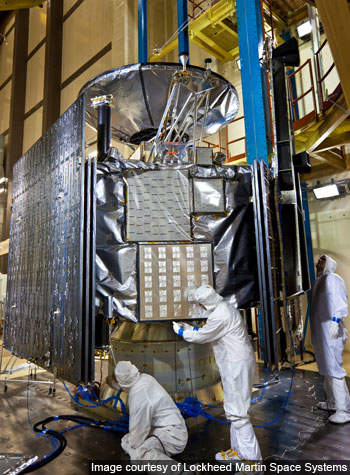 Juno being examined by Lockheed technicians upon completion of acoustic tests. 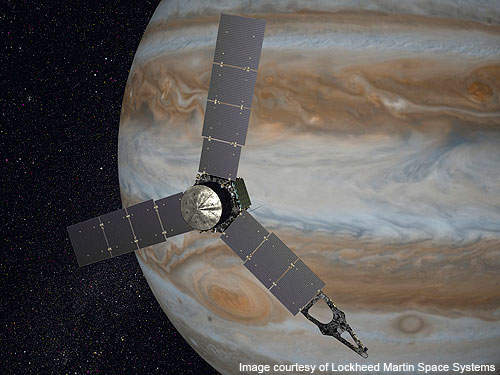 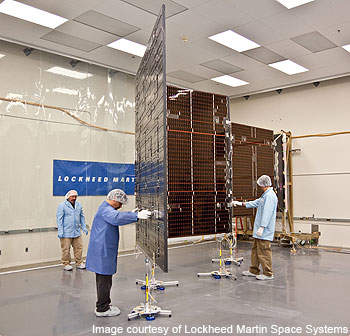 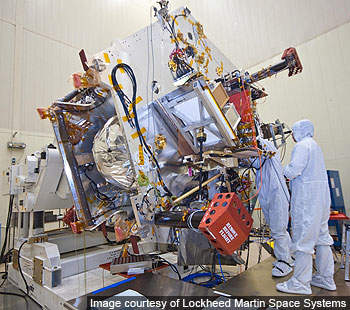 Juno was mounted on a large rotation fixture during construction phase. 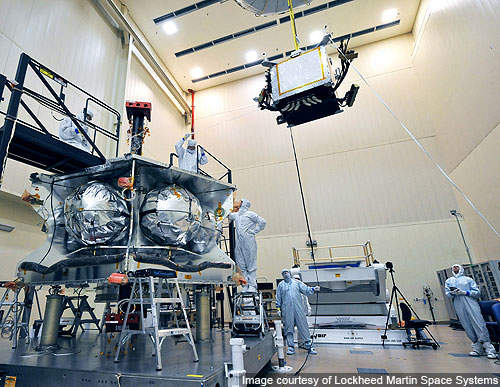 A large radiation vault being incorporated in Juno. 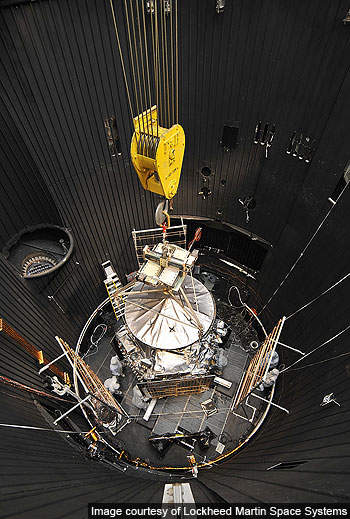 Juno (Jupiter Near Polar Orbit) is a planet exploration spacecraft designed and manufactured by Lockheed Martin Space Systems for the Nasa Jet Propulsion Laboratory to study the structure of Jupiter’s atmosphere. It is the first solar-powered spacecraft to fly to Jupiter and study the evolution of the solar system.

The spacecraft was launched on the back of a United Launch Alliance Atlas V551 launch vehicle from Cape Canaveral launch station, Florida, US, in August 2011. It carries 4,400lb of propellant.

Juno was launched into heliocentric polar orbit around Jupiter, the largest planet in the solar system, to study the composition, gravity field, magnetic field and polar magnetosphere. It examines the presence of ice rock core, water and ammonia within the planet’s deep atmosphere. The spacecraft also investigates the distribution of mass within the planet and evaluates wind, temperature and cloud motions.

The spacecraft was launched in October 2013. It entered heliocentric orbit in July 2016. The infrared and microwave instruments measure thermal radiation emitting from Jupiter’s deep atmosphere. These measurements allow the spacecraft to identify the amount of water existing in and on the planet.

“The spacecraft was launched in October 2013 and entered heliocentric orbit in July 2016.”

Other science instruments installed in the spacecraft simultaneously collect gravitational field and polar magnetosphere data on Jupiter. Upon completion of 32 orbits around the planet, Juno is expected to be terminated from service in October 2017. Data analysis will be carried out in 2018.

Development of Juno began as part of Nasa’s New Frontiers Program (NFS). It is the second mission in the programme, which includes a series of other space exploration missions being conducted to study planets surrounding the Sun, including Jupiter, Venus and Pluto. The programme comprises two missions, namely New Horizons, launched in January 2006, and Juno.

Juno is designed to serve for a lifespan of 365 days. It can rotate at the rate of 2rpm to 5rpm. The spacecraft weighs around 3,625kg and consumed 15KW at launch. The power consumption declined to 420W upon reaching Jupiter due to radiation. The spin stabilisation capability allows the spacecraft to point towards the Sun without the requirement of active control systems.

Two of the arrays comprise four solar panels each. The third array features three solar panels and a magnetometer at its tip. The solar panels were folded in four hinged segments for incorporation in the launch vehicle.

Nasa selected Lockheed Martin in June 2005 to design and build Juno at a cost of $700m. The launch date, which was initially planned for June 2009, was rescheduled to 5 August 2011 due to Nasa’s budgetary restrictions.

Juno’s assembly, testing and launch operations began in April 2010 at its facility in Denver, Colorado. The spacecraft was shipped to Nasa’s Kennedy Space Centre on a C-17 GlobeMaster III transport aircraft in an environmentally controlled container in April 2011. Juno underwent four months of testing at the centre before its launch.

The Juno is equipped with a nine-strong instruments suite that in turn comprises 26 sensors.

“Juno is fitted with a colour camera to offer high-resolution images of Jupiter to the public.”

Juno is fitted with a colour camera to offer high-resolution images of Jupiter to the public. All these instruments operate at infrared, visible and ultraviolet frequencies.

The Juno is placed 4,300km above the Callisto orbit to avoid radiation emitted by Jupiter. The spacecraft features a Radiation Vault enclosed within titanium walls to prevent damage to electronics and solar panels.

The engineering systems and science instruments are protected from Jupiter’s high radiation through a high-gain antenna installed at the centre of the spacecraft.