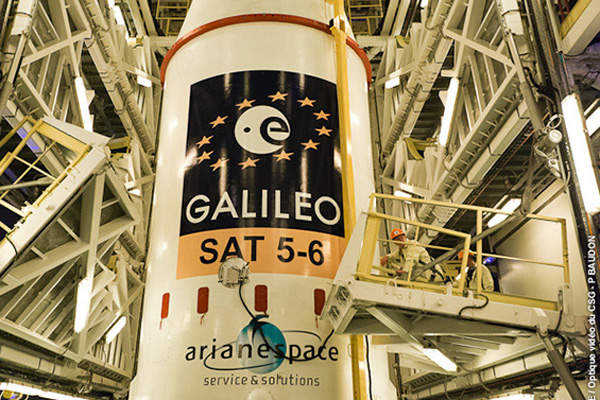 Galileo SAT 5 is the first full operational capability (FOC) satellite in a series of 22 proposed FOC satellites under the Galileo project. Image courtesy of Arianespace. 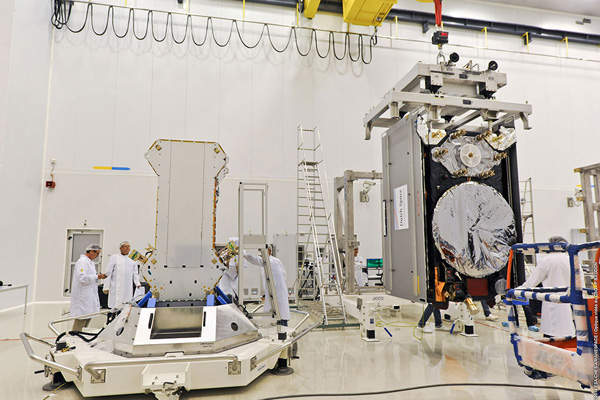 Galileo spacecraft FM1 is moved for positioning on the payload dispenser, which was developed by RUAG Space Sweden. Image courtesy of Arianespace. 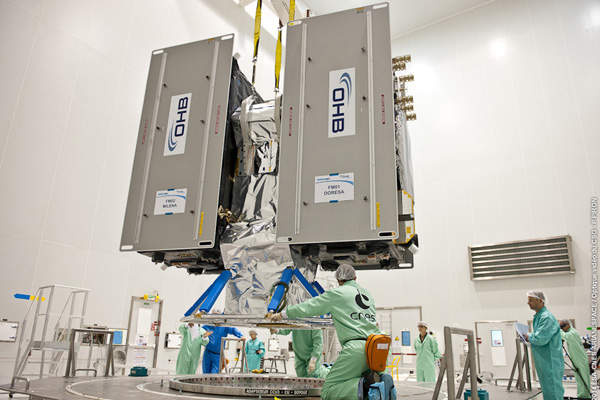 The Galileo FOC SAT 5 was joined with SAT 6 at the Soyuz dispenser unit. Image courtesy of Arianespace. 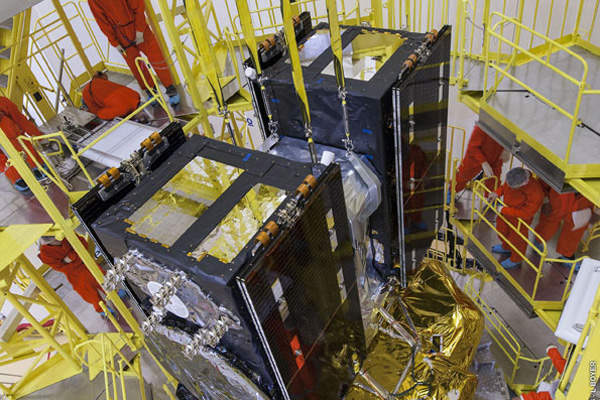 The two satellites were launched jointly. Image courtesy of Arianespace. 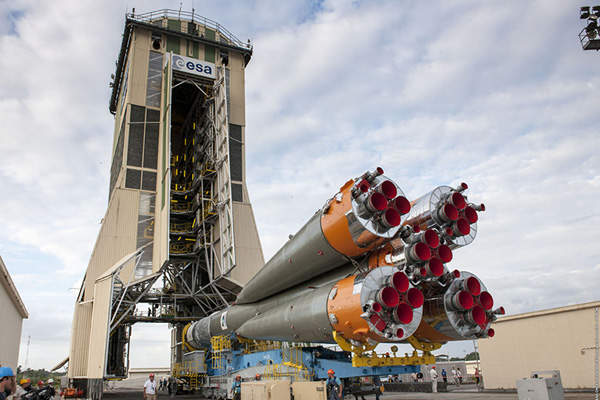 The three-stage Soyuz was transferred by rail in a horizontal position from the MIK assembly facility to the launch zone. Image courtesy of Arianespace. 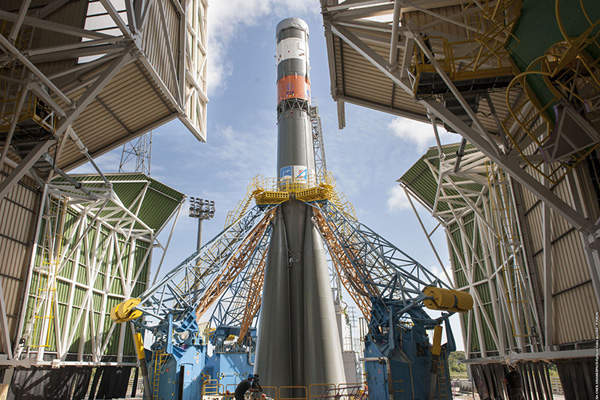 The Soyuz VS 09 launch vehicle in a vertical orientation position. Image courtesy of Arianespace. 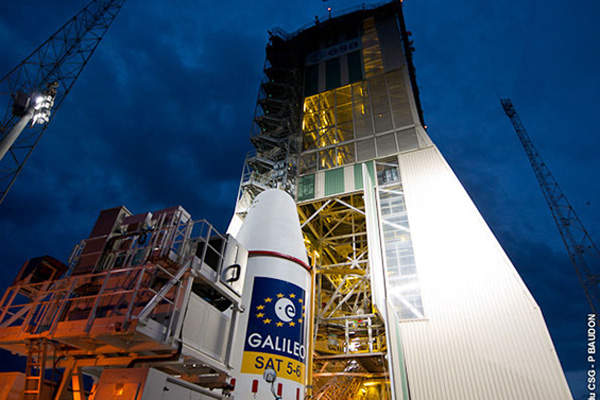 The Galileo satellites’ integration with Soyuz began with the upper composite’s transfer to the launch complex in French Guiana. Image courtesy of Arianespace. 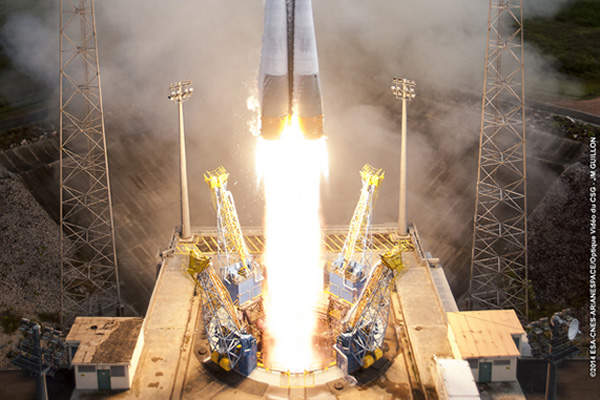 Soyuz carrying the first two FOC satellites was successfully launched from the spaceport on 22 August 2014. Image courtesy of Arianespace.

Galileo SAT 5 was launched from the Guiana Space Center (CSG) in Kourou, French Guiana, into a circular Medium Earth Orbit (MEO) by a medium-lift Soyuz launch vehicle, which is operated by Arianespace, in August 2014, along with Galileo FOC M1 SAT 6. The Sat 5 was built by OHB System and the payloads were supplied by Surrey Satellite Technology.

The data from the telemetry stations showed that the satellites are in stable condition causing no harm, however studies and analyses are still going on to find out the impact of the misplacement.

The Galileo SAT 5 Doresa was designed and developed by OHB System, a German space technology company that specialises in developing small navigation satellites. The satellite, constructed in Bremen, Germany, has a launch mass of 730kg and life span of more than 12 years.

The two satellites were mounted on their payload dispenser system, which was developed by RUAG Space Sweden, in August 2014. The final payload integration included the installation of the satellites along with its dispenser system onto the launch vehicle’s Fregat upper stage. This was followed by their encapsulation in the two-piece protective payload fairing to form the upper composite segment for installation on the Soyuz launch vehicle at the launch zone.

OHB System also received the contract to build the remaining 21 FOC satellites of the Galileo programme. The total investment for the 22 satellites is approximately €821m, which is funded by the European Union.

The satellite was launched by the Soyuz Flight VS09 rocket, a medium-lift launch vehicle. The four-stage launch vehicle has four boosters in the first stage, a central core in the second stage and a restartable Fregat upper stage in the fourth stage. It also has a payload dispenser and fairing.

The first stage consists of four cylindrical-conical boosters with RD 107A engines powered by liquid oxygen and kerosene. The central core in the second stage has a RD-108A engine, which has a nominal burn time of 286 seconds. The third stage uses a RD-0110 engine, while the ST-B incorporates an upgraded RD-0124 engine. The ignition of the engine during this stage takes place approximately two seconds before the shutdown of the second stage engine.

The fourth stage, the Fregat upper stage, operates as an orbital vehicle and is independent from the other three stages as it features its own guidance, attitude control, navigation, tracking and telemetry systems. The propulsion system of this stage is powered by storable propellants – UDMH (unsymmetrical dimethyl hydrazine) and NTO (nitrogen tetroxide), and is encapsulated in a fairing that has an external diameter of 4.1m and length of 11.4m.

The Galileo constellation with 30 satellites (27 operational and three active spares) will provide a variety of navigational services such as real-time positioning, free signal service, search and rescue services, safety of life services and commercial services when it becomes fully operational. It will then also be able to work with Russia’s GLONASS system and the American GPS system.

The FOC payloads have many subsystems that ensure the transmission of navigation messages from the satellite to the receivers on Earth. Each payload consists of atomic clocks, high power travelling wave tube amplifiers (TWTAs), signal generators and antennae.

Project Galileo, named after the world renowned astronomer Galileo Galilei, is Europe’s own global navigation satellite system, which aims to provide a highly accurate global positioning system (GPS) that is interoperable with the global satellite navigation systems of the US and Russia.

"The 30 satellites in the Galileo constellation will be placed in three orbital planes."

The ground infrastructure centres are located in Germany, Italy, Belgium, Norway and Sweden.

The Galileo project is divided into two phases, an in-orbit validation (IOV) phase and full operational capability (FOC) phase. The IOV phase involves testing and qualifying the system and the launch of two experimental and four operational satellites, as well as their ground infrastructure.

Meanwhile, the FOC phase includes the launch of the remaining satellites and installation of ground infrastructure. It encompasses an intermediate operational phase with four IOV satellites and 14 other satellites, making a total of 18. Galileo FOC M1 SAT 5 and 6 are the first two satellites of the FOC phase and were launched in August 2014 into the third orbital plane. The ESA aims to place all 18 satellites in space by 2015 and the rest in 2020.