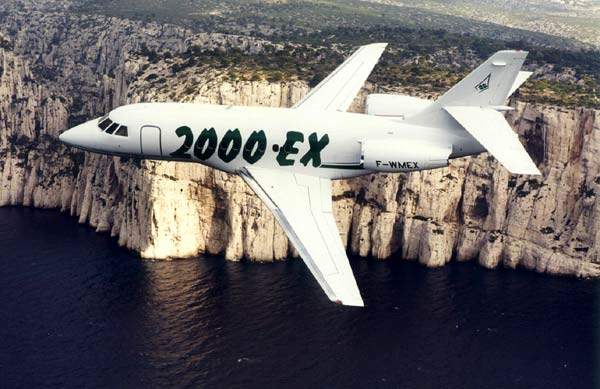 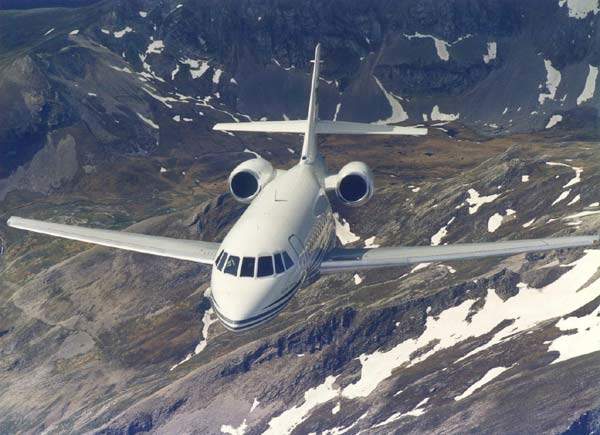 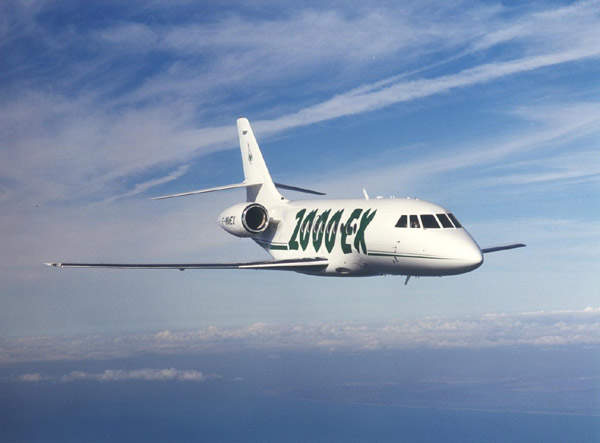 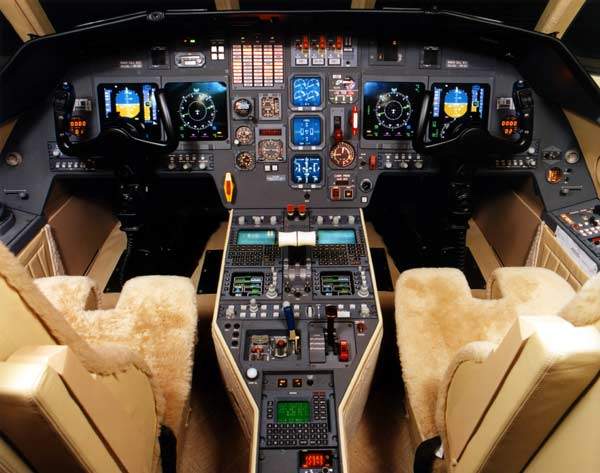 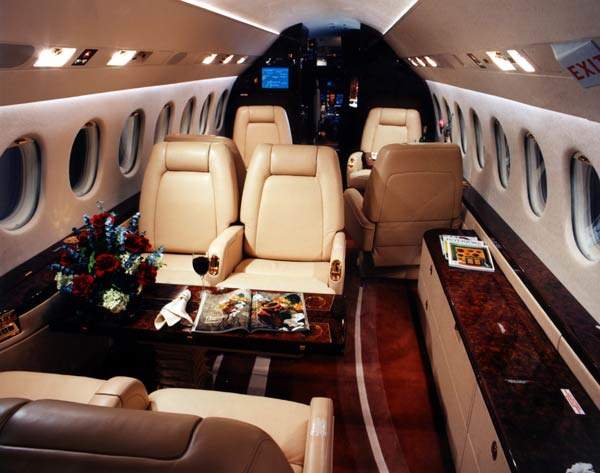 The interior of the Falcon 2000EX cabin. 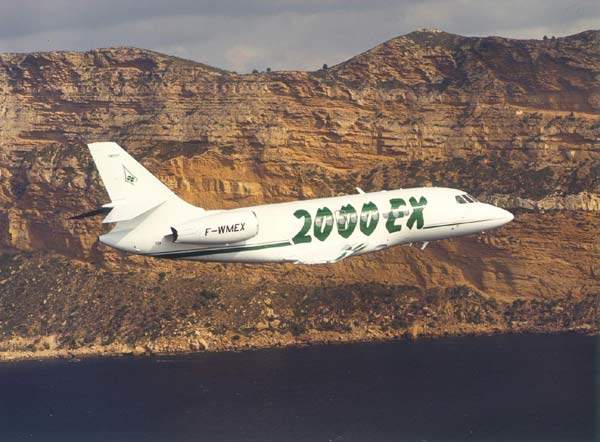 With more powerful engines and extra fuel capacity, the 2000EX has a range of 7,000km. 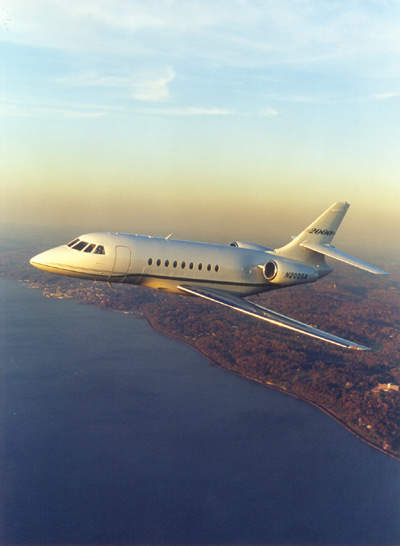 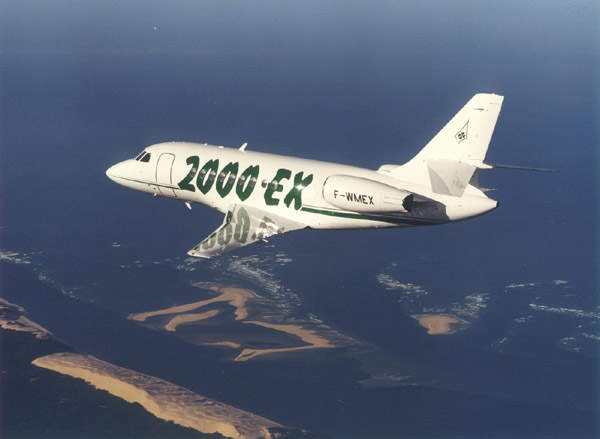 Dassault announced the Falcon 2000, originally called the Falcon X, in 1989. The development of the aircraft was carried out by Dassault in partnership with Alenia. The aircraft’s first flight was in 1993 and it entered service in 1995. Over 220 aircraft have been delivered.

The extended-range version, the Falcon 2000EX, has more powerful engines and extra fuel capacity, providing a range of 7,000km. The 2000EX took its maiden flight in October 2001, received US and European flight certification in March 2003 and entered service in May 2003. Over 100 2000EX aircraft are in service. The Falcon 2000EX EASy, with the new EASy flight deck, was first flown in January 2003 and received US and European certification in June 2004. Deliveries are underway.

Dassault announced the Falcon 2000LX in May 2006. The aircraft has a range of 7,400km (4,000nm) at Mach 0.8, with blended winglets designed by Aviation Partners for increased fuel efficiency.

To accommodate the winglets, reinforcing straps were added to the upper and lower wing panels and the servo actuator door was reinforced. The baseline wingspan of the 2000LX has been increased by 2.06m in comparison with the 2000EX. The 2000LX is 5% more efficient than 2000EX in terms of range and efficiency. For 2000EX deliveries in 2008/2009, winglets are available as an option.

Alenia is responsible for the development and manufacture of the rear fuselage section and the engine nacelles. The rear mounted engine pods and pylons were developed by Alenia and Piaggio. The tail has carbon fibre skin panels, composite spars and a cast titanium central box.

The communications suite includes a dual communications and navigation system with dual TRD-94D Mode-S transponders, dual RTU-4420 radio tuners and a Rockwell Collins HF-9000 transmit / receive unit. A satellite communications unit can be fitted with the podded antenna installed in the fintip.

The Falcon 2000EX was initially equipped with the ProLine IV, but is now supplied fitted with the Honeywell EASy Enhanced Avionics System, as on the Falcon 900EX. EASy is based on the Primus Epic system with improved safety and information management features to meet future Air Traffic Management (ATM) requirements.

The cabin can accommodate up to 19 passengers. The forward part of the passenger cabin is arranged as a four-seat lounge. The rear part of the cabin is set out with a two-seat sofa and four seats. The cabin is 1.88m high, 2.34m wide and the cabin floor has a length of 7.98m.

The 3.79m³ pressurised baggage compartment is externally loaded, internally accessible and stows up to 725kg.

The Falcon 2000 has two rear-mounted General Electric / Honeywell CFE738-1-1B turbofan engines, each providing 26.3kN thrust. The engines are fitted with Dee-Howard clamshell-type thrust reversers which open in upper and lower halves about the engine centreline and are hinged at the nozzle. The fuel tanks have a capacity of 5,513kg.

“The Falcon can accommodate up to 19 passengers.”

The fuel system has increased capacity of 7,557kg, compared to 5,513kg for the Falcon 2000. It has new pumps and gauging system and new Intertechnique fuel quantity management computer. The range of the 2000EX carrying six passengers is 7,037km.

The Falcon 2000 has retractable tricycle type landing gear, each unit being twin-wheeled. The main gear retracts inwards and the nosewheel retracts forward.

Because of its increased weight, the 2000EX has heavier duty landing gear and braking system, supplied by Messier Bugatti. The braking system has a new brake steering control unit with brake temperature measurement and automatic airbrake activation for landing and rejected take-offs.