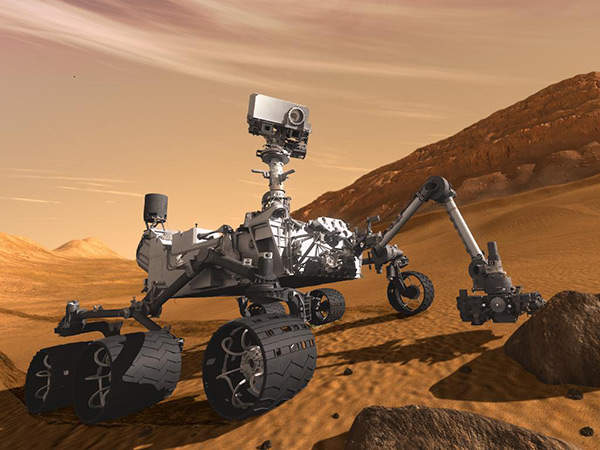 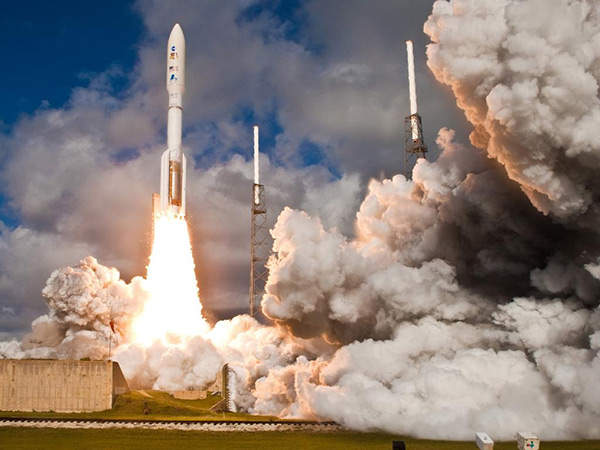 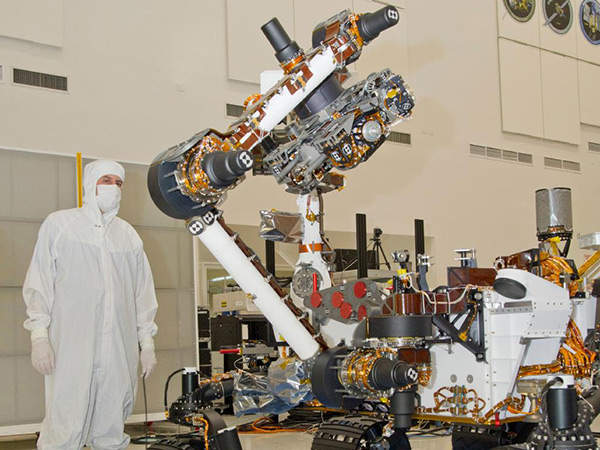 A close-up of the robotic arm of the Mars Science Laboratory rover Curiosity. Image courtesy of NASA/JPL-Caltech. 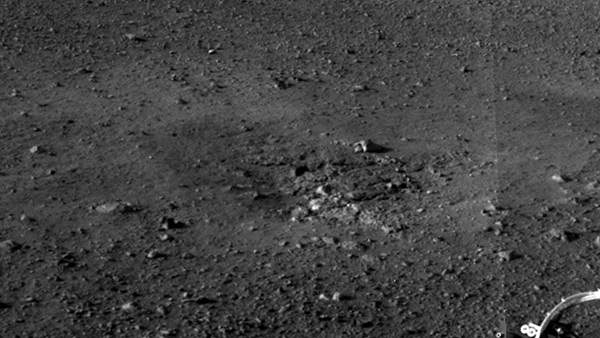 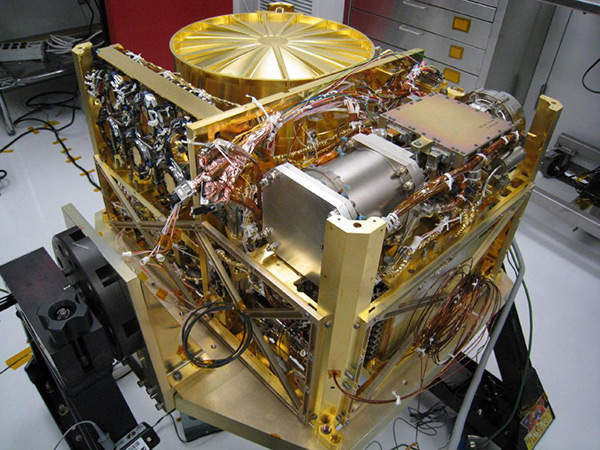 The Sample Analysis at Mars (SAM) instrument aboard the Curiosity rover analyses samples of material collected by the robotic arm. Image courtesy of NASA-GSFC. 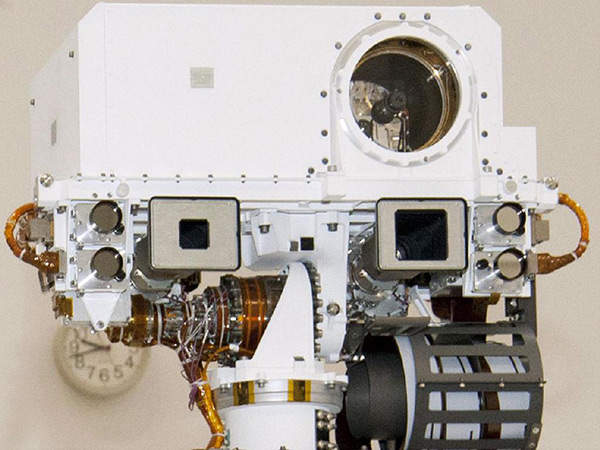 The head of the remote sensing mast on the Mars Science Laboratory Curiosity rover. Image courtesy of NASA/JPL-Caltech/MSSS. 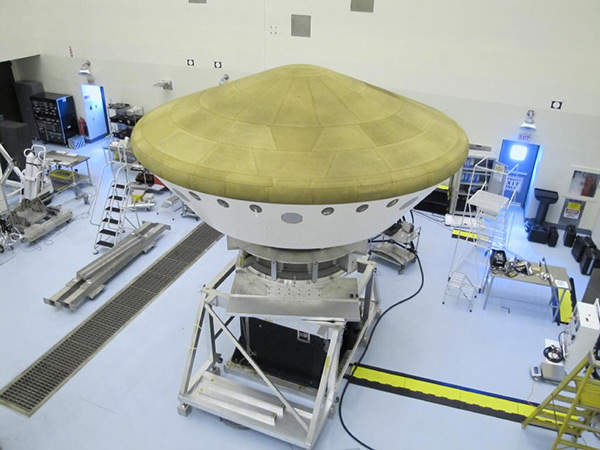 The Mars Science Laboratory rover was tucked inside a tightly packaged cruise stage and aeroshell with a heat shield. Image courtesy of NASA/JPL-Caltech. 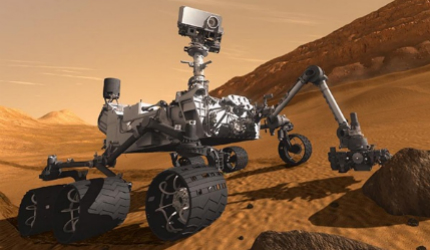 The Mars Science Laboratory Curiosity rover was launched as part of NASA’s Mars Exploration Programme, intended for robotic exploration of the red planet. The Curiosity was designed to determine the habitability of the Mars.

The Curiosity rover was launched from Cape Canaveral Air Force Station on 26 November 2011 and landed on Mars on 6 August 2012. The Atlas V-541 launch vehicle was used to lift off the MSL spacecraft that carried Curiosity.

The MSL mission employed new technologies for the entry, descent and landing (EDL) of the Curiosity. The rover was placed inside an aeroshell for protection against extreme heat during EDL. It landed using a guided entry and a sky crane touchdown system instead of airbag landing used in the past Mars missions. The Curiosity rover sent the first pictures of Mars on the same day it landed.

The Mars Science Laboratory is managed by JPL for the NASA’s Science Mission Directorate (SMD). JPL is a part of the California Institute of Technology.

“The 3m Curiosity rover is about twice as long and five times as heavy as NASA’s Mars Exploration Rovers, Spirit and Opportunity.”

The 3m Curiosity rover is about twice as long and five times as heavy as NASA’s Mars Exploration Rovers – Spirit and Opportunity. It uses design elements of its predecessors, such as six-wheel drive, a rocker-bogie suspension system and mast-mounted cameras. The onboard computer and electronics are protected by the body, known as warm electronics box (WEB). The rover equipment deck (RED) is a segment covering the top of the WEB.

The rover mast and cameras are mounted on the top of the RED. The rover is equipped with a robotic arm made of titanium, which can extend up to 2.3m from the front of the rover body. It includes a percussive drill, hand lens imager, element-identifying spectrometer, rock brush and instruments for sample preparation functions.

“The rover crosses obstacles of up to 75cm high and can travel up to 90m an hour.”

The Curiosity is equipped to collect and process the samples of rocks and soil for further distribution into onboard test chambers. The rover has an improved range from previous Mars rovers, it will analyse dozens of samples gathered from rocks and ground. It carries more payload and more than ten times the capacity of the earlier Mars rovers. It boasts the most advanced payload of instruments ever used on the surface of the red planet.

The mast-mounted camera captures the surroundings and stores the imagery in high-definition video sequences. It can also view the samples collected or treated by the robotic arm. The ChemCam vaporises the slender layers of material from rocks or soil using the laser pulses. The instrument also consists of a spectrometer to identify the atoms and a telescope to capture the area lit up by the beam. The radiation environment at the surface of Mars is detected using the radiation assessment detector. The data is used for the planning of human exploration mission of Mars.

The rover crosses obstacles of up to 75cm high and can travel up to 90m an hour. It is anticipated to travel an average distance of 30m per hour depending on power supply, visibility and type of terrain. It can travel up to 200m a day on the red planet.

Communication devices of the Curiosity rover

The Curiosity is equipped with three antennas on the RED. The multiple antennas serve as back-up in case of needful situation. The rover transmits radio waves through its 400MHz ultra-high frequency antenna to communicate with Earth. The messages are sent via Mars Odyssey and Mars reconnaissance orbiters as they are nearer to the rover than the deep space network (DSN) antennas on Earth. Their extended field of view also allows the transmission of more data back to Earth at faster rates.

The Curiosity rover receives commands from the earth through its high-gain antenna. The steerable high-gain antenna can send a beam of information to any antenna on the Earth. It saves the energy of rover by avoiding the need to turn the entire body to communicate with Earth. An omni-directional low-gain antenna is used to receive signals. The antenna sends data at a low rate to the DSN antennas on the Earth.

The Curiosity rover receives energy from onboard multi-mission radioisotope thermoelectric generator (MMRTG) supplied by Boeing. The system produces electricity from the heat generated by the radioactive decay of plutonium-238. The electricity powers the individual motors fitted on each wheel.

This power system provides maximum speed of 4cm a second on a flat-hard surface and has an operating lifespan of a full Martian year (687 Earth days). The system also ensures high mobility and payload capability of the rover, while allowing it to explore a much larger range of latitudes and altitudes than the previous Mars rovers.