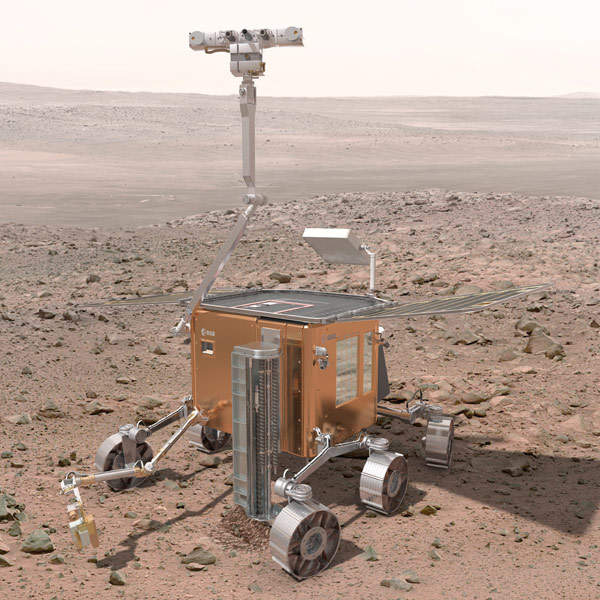 The ExoMars rover will gather data on the martian geology and environment, as well as determine the present and past signs of life on the Red Planet. Image courtesy of ESA. 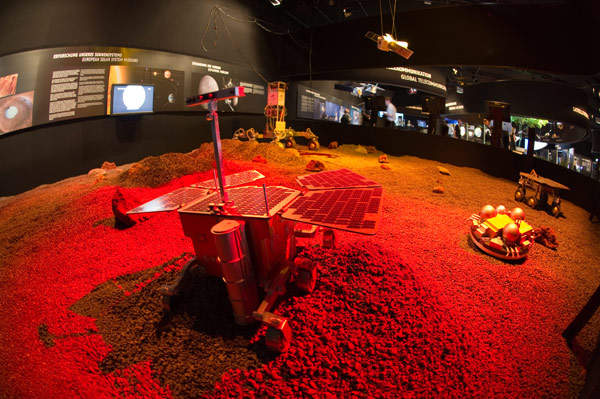 A demonstration of the ExoMars rover and ExoMars Entry, Descent and Landing (EDM). Image courtesy of ESA - M. Pedoussaut. 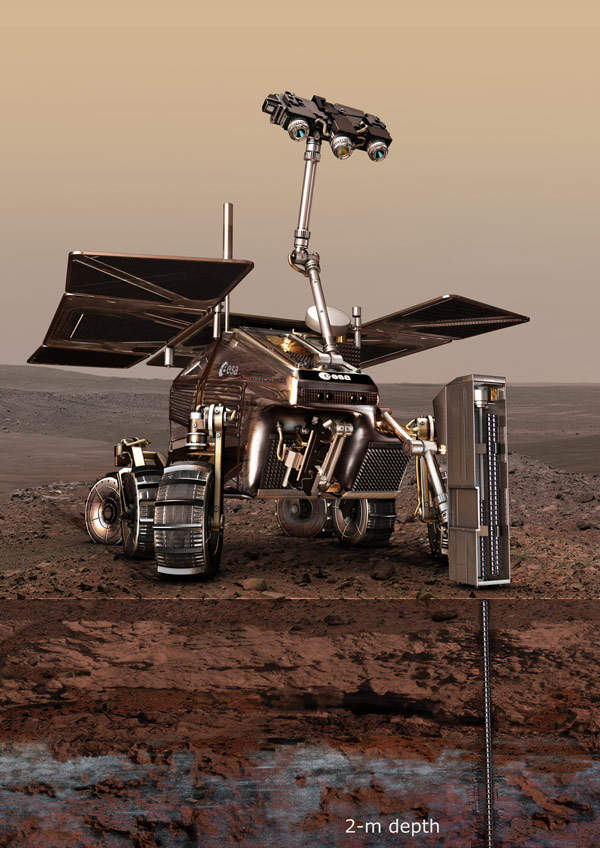 The ExoMars rover will collect samples from Mars by drilling up to two metres in depth. Image courtesy of ESA - AOES Medialab. 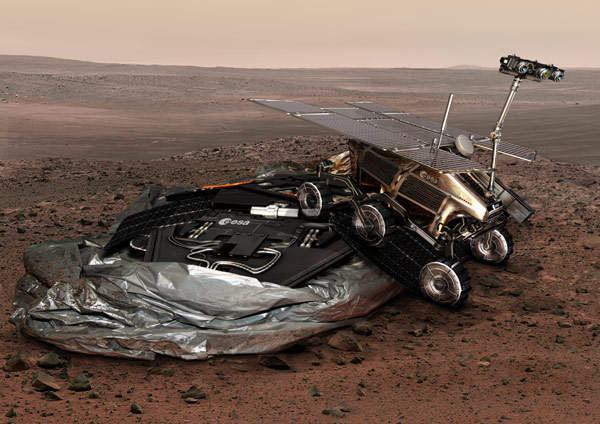 The ExoMars rover will be safely landed on Mars by the second EDM, with the help of a parachute. Image courtesy of ESA - AOES Medialab. 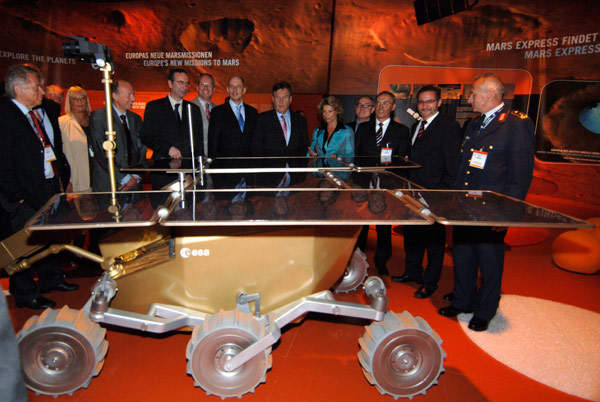 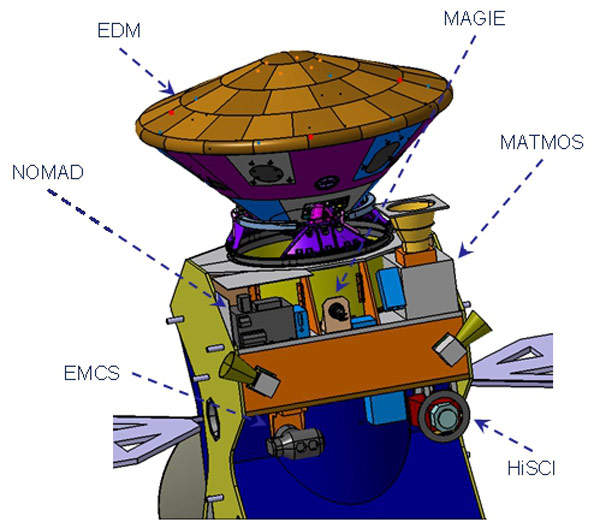 Artist’s impression of the Trace Gas Orbiter to be launched as part of the ExoMars mission. Image courtesy of ESA. 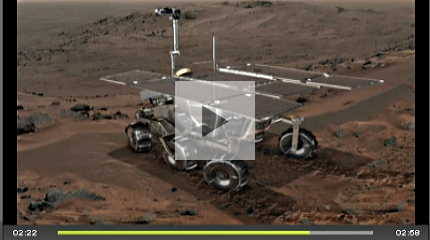 VIDEO: watch the ExoMars Rover in action by clicking here.

Exobiology on Mars (ExoMars) is a joint Mars exploration project being run by the European Space Agency (ESA) and Russian Federal Space Agency (Roscosmos). The project has been launched to study the past and present signs of life on Mars and the climate and geology of the red planet, as well as to gain more knowledge of the Martian environment.

"Development of the ExoMars rover was approved by the Space Minister of Europe in December 2005."

ExoMars comprises a trace gas orbiter (TGO), two entry, descent and landing demonstrator modules (EDM) and a rover. These mission elements are planned to be sent to Mars in two launches atop a four-stage ‘Proton’ rocket launcher.

The first launch carried the TGO, and the first EDM referred to as Schiaparelli from the Baikonur Cosmodrome launch site in March 2016, to identify exploration targets for the rover. The EDM will be released onto Mars in October 2016. The rover and the second EDM will be launched in May 2018 to explore the targets identified by the first EDM.

The project was initially undertaken jointly by Nasa and the ESA. However, Nasa withdrew from the project in February 2012 due to budgetary constraints. ESA went ahead with the project in collaboration with a new partner, Roscosmos, in March 2012. Roscosmos confirmed its decision to provide two heavy-lift Proton rockets for supporting the project and signed a formal contract with ESA in March 2013.

The TGO will land the EDM on a predefined area on the surface of Mars for identifying the existence of methane and other atmospheric gases using onboard sensors.

The EDM will collect data related to Martian weather conditions and transmit the same to the ground station, through the TGO. ESA will use this data to choose a suitable technology and the exact location for landing the rover on Mars.

Rover will be landed on Mars by the second EDM, with the help of a parachute. Upon completion of the rover’s landing, the orbiter will be used as a telecommunication relay spacecraft for future missions until 2022.

The rover will collect soil samples by drilling the surface of Mars to a depth of two metres using a robotic driller. Collected samples will be crushed into powder at the in-built crushing station and transferred to the onboard analytical laboratory for modern scientific analysis.

Capabilities of the ExoMars rover vehicle and construction timeline

The ExoMars rover is designed for a lifespan of six years. The launch weight of the rover is approximately 220kg. It can survive in the cold Martian nights with the aid of batteries and heater units. It is equipped with two gallium arsenide solar arrays to produce the required electricity to charge its batteries.

The system preliminary design review of the 2018 mission started in the fourth quarter of 2014. The final acceptance and qualification reviews are scheduled in October 2017.

Origins of Exobiology on Mars and ESA Aurora Programme details

Development of the ExoMars rover was approved by the Space Minister of Europe in December 2005. Rover is being developed under the Aurora Programme launched by the ESA as a flagship mission.

MacDonald Dettwiler and Associates (MDA) and EADS Astrium were awarded a €1m ($1.3m) contract by the ESA in 2007 to design and manufacture an ExoMars prototype chassis.

Thales Alenia Space (TAS) is responsible for the design and manufacture of the EDM, TGO, analytical laboratory drawer and Pasteur payload instruments. EADS Astrium is involved in the development of the rover itself.

Technology and equipment on the ExoMars exploratory rover

"ExoMars will comprise of a trace gas orbiter (TGO), two entry, descent and landing demonstrator modules (EDM) and a rover."

It is fitted with autonomous navigation stereo cameras and an onboard computer to create 3D digital maps without the intervention of ground controllers in moving the vehicle. It also has a service module compartment and a Pasteur payload laboratory.

Close-up collision avoidance cameras are mounted on the vehicle to ensure its safety. The motion control robustness was improved by inclinometers and gyroscopes.

ExoMars is controlled and tracked from a ground station using a Doppler tracking radar data system. The onboard computer transmits commands to the rover via the TGO.