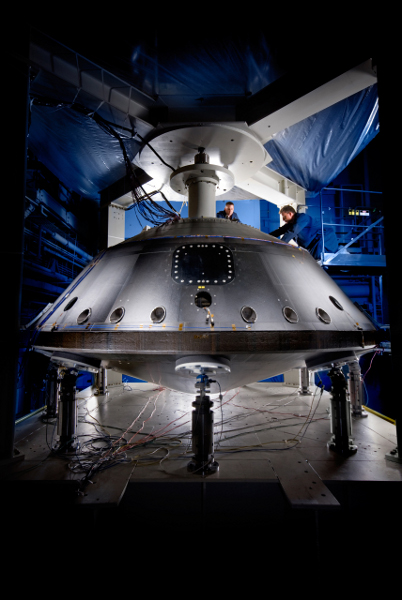 Lockheed Martin Space Systems aeroshell programme manager Rich Hund said that the aeroshell’s job during EDL was to protect the Mars Curiosity Rover and its associated systems in extreme environments and have it descend to the point where the sky crane can lower it gently on to the surface of Mars.

"This aeroshell, at nearly 15ft across, is the largest capsule we’ve ever flown and the design had to address the large size and weight of the rover along with the requirement for landing at a more-precise point on Mars," he said.

The aeroshell consists of a back shell to offer structural support for the parachute and the descent stage, as well as protection for the rover.

Protection for the rover from extreme heat will be provided by the tiled phenolic impregnated carbon ablator (PICA) thermal protection system of the aeroshell’s heat shield, the second component of aeroshell.

"This aeroshell, at nearly 15ft across, is the largest capsule we’ve ever flown and the design had to address the large size and weight of the rover along with the requirement for landing at a more-precise point on Mars."

During EDL, two other Mars spacecraft, built and operated for NASA by Lockheed Martin Space Systems, will examine MSL’s transmissions and send them to Earth.

Following the entry into the Martian atmosphere, the spacecraft’s onboard autonomous computer programme will start executing commands to thrusters, systems and sensors, with completion expect seven minutes later with a soft landing on Gale Crater.

After being switched from EDL to surface mode, the Mars Curiosity Rover will begin its operations aimed at determining the habitability of the planet, its climate and geology illustration, as well as making preparation for future human exploration.

Built by the NASA’s Jet Propulsion Laboratory (JPL), the MSL supports the Mars Exploration Program’s strategy of "follow the water".

The spacecraft is expected to enter the Martian atmosphere on 5 August.