467 passengers in a three-class configuration 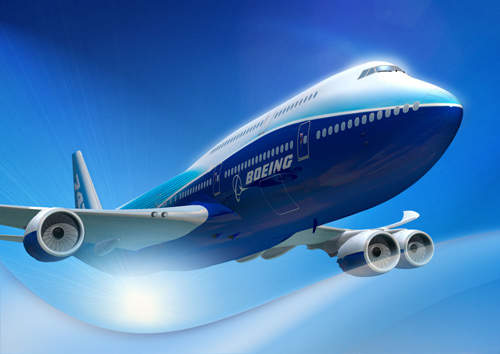 Boeing's new 747-8 family of aircraft includes the 747-8 intercontinental in passenger and VIP variants and the 747-8 freighter aircraft. 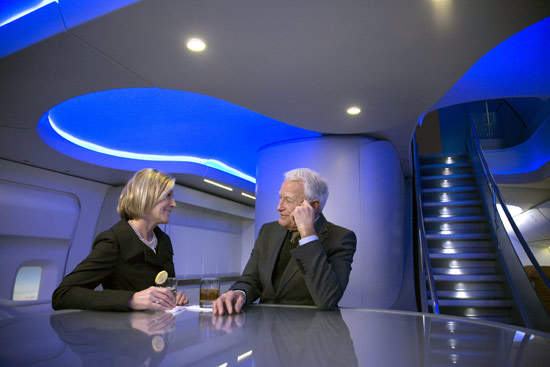 Passenger entryway for the 747-8 intercontinental with staircase to the upper deck. 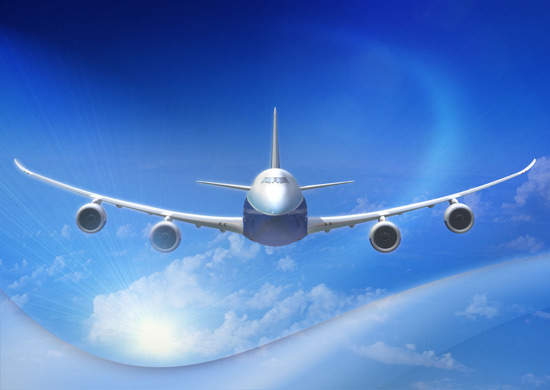 Boeing reports that the seat-mile cost of the 747-8 intercontinental is 10% lower and 15&#37; more fuel efficient compared to the 747-400, with nearly equivalent trip costs. 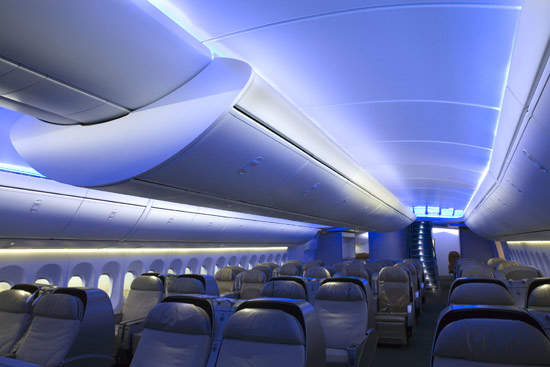 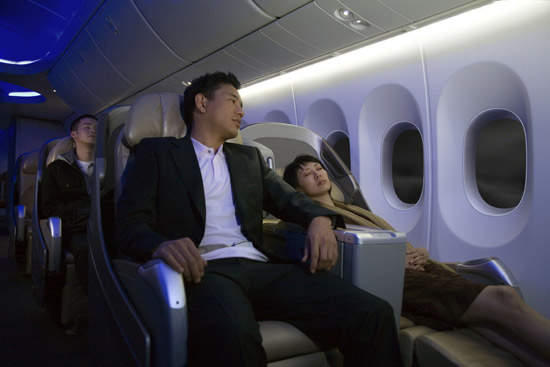 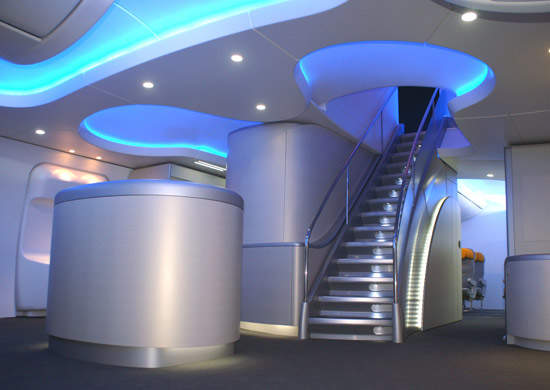 The 747-8 intercontinental uses interior features from the 787 Dreamliner, including the curved, upswept architecture. 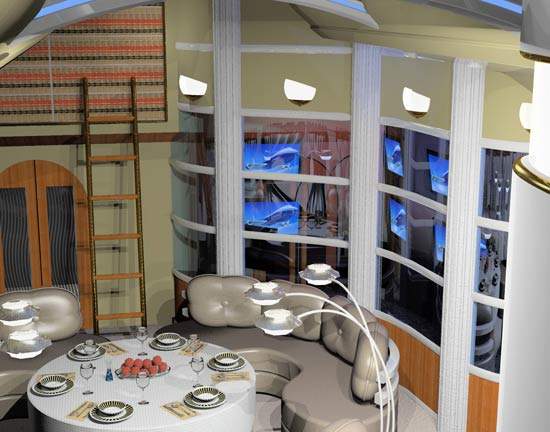 The Boeing design concept for the 747-8 VIP, showing view from the top of the spiral staircase, with the dining area and a ladder extending to library shelves. 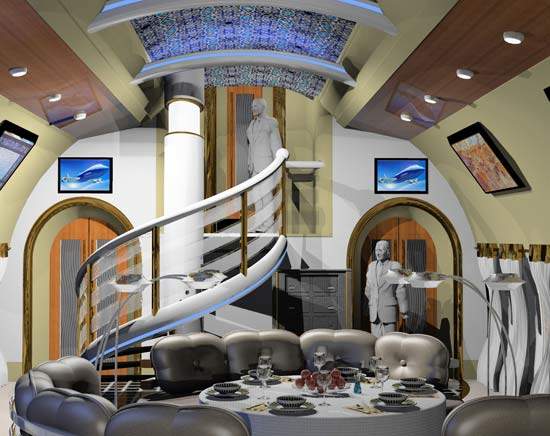 Design concept for the 747-8 VIP showing a dining area with a spiral staircase and vaulted ceilings. 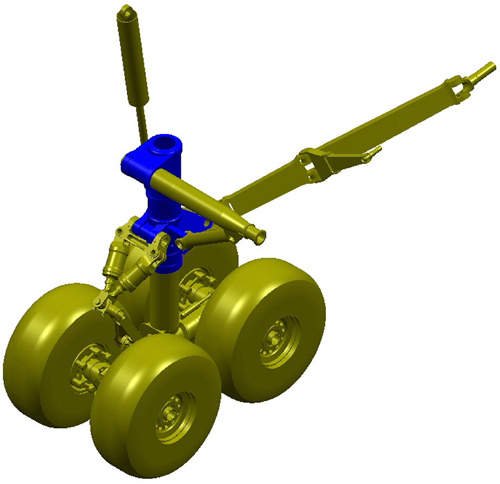 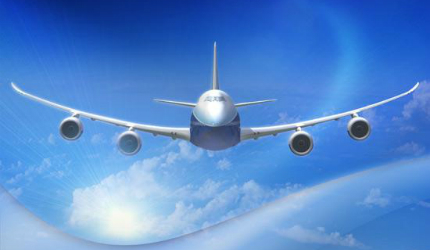 The aircraft uses many of the technologies developed for the 787 Dreamliner, including the engines, interior configuration, flight deck technologies and instrumentation and wing configuration. These provide significant increases in passenger and freighter capabilities, improved fuel efficiency, reduced noise and emissions and improved operating economics.

In December 2011, Boeing obtained certification from the Federal Aviation Administration (FAA) for the 747-8 intercontinental aircraft.

As of December 2012, 107 orders have been placed for 747-8 intercontinental passenger and freighter versions and 40 aircraft have been delivered.

Boeing launched the 747-8 programme in November 2005. Wind tunnel tests and load tests started in 2006. In November 2008, Boeing announced delays to the delivery schedule with delivery of the first freighter variant moved from late 2009 to the third quarter of 2010 and delivery of the intercontinental passenger variant moved from late 2010 to the second quarter of 2011.

The first 747-8 intercontinental was rolled out in February 2011 at Boeing’s factory in Everett, Washington.

Orders and deliveries of Boeing 747-8

The 747-8 VIP variant of the 747-8 intercontinental passenger aircraft was first announced in October 2006, although a contract was placed months earlier by the launch customer, the government of Qatar, in May 2006.

In January 2011, Guggenheim Aviation Partners cancelled its order for four Boeing 747-8 freighters due to delay in deliveries.

The forward production plans involve ramping down to completion and final production of the 747-400 series and the simultaneous ramping up of 747-8 production. Delivery of the final 747-400 was in early 2009.

The first 747-8 freighter was delivered to Cargolux in October 2011, with the first 747-8 passenger aircraft received by Lufthansa in May 2012.

The first of five 747-8F aircraft was delivered to Volga-Dnepr in January 2012, with the second following in April 2012. Korean Air received its first 747-8F aircraft in February 2012.

A 747-8 VIP variant was delivered to an unnamed customer in February 2012.

Performance of the 747-8 airliner

The aircraft can able to operate from about 200 airports worldwide for hub-to-hub and hub-to-point operations.

The aircraft uses the same pilot type ratings as the 747, many existing 747 spares, services and the majority of the ground support equipment.

Boeing reports the seat-mile cost of the 747-8 intercontinental is 10% lower and 15% more fuel efficient compared to the 747-400, with nearly equivalent trip costs. Both versions of the 747-8 meet the stage 4 standard and the QC2 standard noise requirements.

The passenger and freighter versions have identical external dimensions and are made from aluminium rather than composite construction.

The aircraft has an upgraded flight deck and an improved wing design with raked wingtips, spoilers, ailerons, double-slotted inboard flaps and single-slotted outboard flaps. The wingspan is 68.5m.

The 747-8 aircraft has conventional rather than fly-by-wire controls.

The 747-8 VIP aircraft, announced in 2006 is customised to accommodate typically eight to 100 passengers. The cabin (length 63.25m, width 6.12m and height 2.39m) can be configured in executive or luxurious rooms and suites.

The 747-8 intercontinental uses interior features from the 787 Dreamliner, including the curved, upswept architecture and new lighting technology. The passenger entrance has a staircase to the upper deck. The new windows are larger than those on the 747-400 (38cm high x 27.3cm wide).

The total cargo capacity of the intercontinental is 161.5m³ which can accommodate seven pallets and 16 LD-1 containers plus additional bulk storage of 19.2m³.

The freighter aircraft was launched in November 2005, with orders for 18 aircraft.

The aircraft has four engines mounted under the wings. The engine selected for the aircraft is the GEnx-2B67, the General Electric next-generation engine. The design of the 747-8 aircraft engine is slightly modified variant of the GEnx engine developed for the Boeing 787 Dreamliner aircraft. The engine provides 66,500lb of thrust.

The engine has composite front fan blades of diameter 105in, a high-pressure ratio compressor, and a twin-annular pre-swirler combustor to achieve lower emissions.

The combuster design provides efficient mixing of the fuel prior to ignition which yields lower nitrogen oxide levels and improved life.