Aerodynamic and structural improvements in the 747-400 airframe allow to it to fly further with a greater load, while enhancing fuel economy.

An Air France 747-400. The increased wingspan and winglets are clearly visable, and afford a fuel economy saving of 3%. 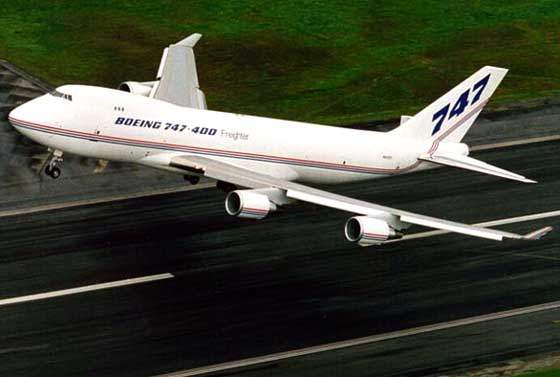 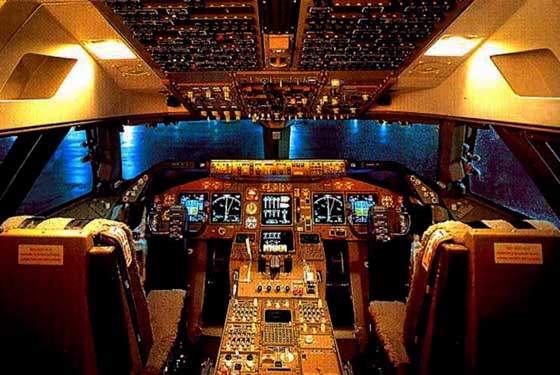 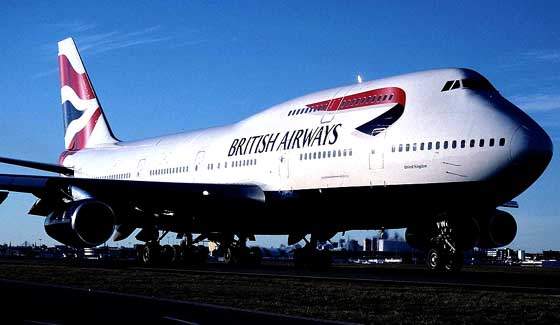 The 747-400 has at present the largest long-haul passenger capability with 524 seats in its 2-class configuration. 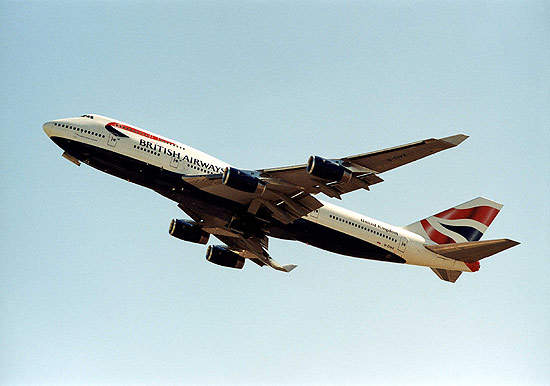 Boeing originally designed the 747 in the 1960s for the US Air Force’s large jet cargo transport programme. The contract went to Lockheed’s C5-A Galaxy, so Boeing decided to pursue the commercial aviation market with their new ‘jumbo’ 747.

The 747 commercial development programme was initiated in 1966 when Boeing received an order from Pan American World Airways for 25 747s.

The specification laid down was for a cost-effective intercontinental airliner, capable of carrying high-volume passenger traffic whilst retaining a superior level of fuel economy.

The first model (747-100) entered commercial service with Pan Am in 1970 and took its maiden flight from New York to London. The 747 brought striking reductions in air travel costs through its still unsurpassed combination of speed, range and capacity. 1,341 Boeing 747 aircraft have been delivered.

Delivery of the final 747-400, the last of 694, was completed in December 2009. The aircraft will be replaced by the new Boeing 747-8 intercontinental airliner.

The 747 project was a massive undertaking and Boeing erected a facility on the 773ac site at Paine Field, Everett, 30 miles north of Seattle, Washington. The facility initially cost $200m, becoming the world’s largest building based on volume.

The Everett facility is an assembly plant rather than a factory. It has its own reservoir to contain runoff and a dedicated rail spur to enable 16,000 suppliers and subcontractors to deliver their six million parts and components to the 747 assembly line.

“On 10 February 2009, the Boeing 747 celebrated its 40th birthday and cemented its stature in modern-day affordable air travel for the masses.”

The basic 747-400 series has five models. The passenger model has a maximum range of 8,430 miles (13,570km) in its three-class 416-seat configuration and has the largest long-haul passenger capability with 524 seats in its two-class configuration.

The first 747-400 model rolled out of Everett in January 1988 and entered commercial service in February 1989 with Northwest Airlines. Boeing cancelled plans for a stretch version, the 747X, in April 2001.

The first of two 747-400ER extended-range models took its maiden flight in July 2002 and was delivered to launch customer Qantas Airways in October 2002.

The 747-400ER is available in either passenger or freighter versions with either greater range or payload capacity. With a gross take-off weight of 412,770kg, the passenger version can fly an additional 805km or carry an additional 6,800kg of payload.

The first freighter version was delivered to Air France in November 2002.

Other orders for the freighter version include KLM, Korean Air, Cargolux, Cathay Pacific Airways and, in February 2004, Nippon Cargo Airlines.

The passenger version will be extended by 3.6m and carry an additional 34 seats in a three-class, 450-seat configuration. The freighter version has been stretched by 5.6m over the 747-400 freighter and has a payload capacity of 140t.

Initial orders have been received from Cargolux (ten plus ten options for the 747-8F freighter) and Nippon Cargo (eight freighters). The first 747-8 freighter was delivered to Cargolux in October 2011. It was originally planned to be delivered in September 2009. The first delivery of the 747-8 Intercontinental, the passenger version aircraft, was delayed until the first quarter of 2012.

In October 2006, Boeing Business Jets launched a VIP version of the 747-8, with an order for three aircraft placed by an undisclosed customer.

The integrated digital avionics systems allowed the Boeing designers to reduce flight deck lights, gauges and switches from 971 in the 747-300 to 365 on the 747-400 model. The digitised flight deck significantly reduce the flight crew workload, with an estimated saving of 33%-50%.

In order to enhance fuel efficiency the 747-400 wings were redesigned, increasing the wingspan from 195ft 8in (59.6m) to 211ft 5in (64.4m). Additional 6ft-high composite winglets have been added, angled upward and marginally outward from the wing tips. The aerodynamic characteristics of these winglets provide a disproportionately superior lift-to-wing-surface-area effect to the wing as a whole without increasing overall wingspan or drag.

The wing weight was reduced even after the increase in wingspan due to the use of high strength aluminium alloys and composite materials.

The winglets give the 747-400 a fuel mileage improvement of 3% and their upward angle means the overall wingspan remains within the standard airport apron slot.

Aerodynamic improvements to the wing-to-body fairings, engine nacelles and engine struts have been implemented to reduce drag. Boeing’s suppliers, such as GKN, Daewoo, Fuji Heavy Industries, Parker Aerospace and Yokohama Rubber, have enabled airframe weight to be reduced in a number of areas by using composite materials such as graphite-epoxy, special aluminium alloys and honeycomb materials.

Logistics and lifetime maintenance costs have been enhanced in a number of systems and components. The wings and fuselage incorporate high strength aluminium skins with improved fatigue life. Goodrich’s structural carbon brakes have improved energy absorption properties and wear resistance and also provide a weight saving on the 16 main landing gear wheels of 1,800lb (816kg).

The interior was designed with flexibility in mind. Operators can make use of ‘quick change features’ to allow them to rearrange seating, relocate class dividers, lavatory and galley module positions as required.

Ceiling and sidewall panels have been contoured to maximise interior space. Interior panels are made with new lightweight laminate materials with thermoplastic properties that give greater fireworthiness and lower smoke and toxicity levels.

Passenger overhead stowage capacity in the 747-400 was increased to 2.95ft³ (0.082m³) per passenger. The air distribution system has five instead of three zones offering greater control of air supply and air conditioning dependent on passenger density.

The aircraft heating, ventilation, air conditioning, lighting and other electrical systems are supplied from the new 1,450hp auxiliary power unit (APU) from Pratt & Whitney Canada, which runs a fuel efficiency saving of 40%.

The 747-400 is powered by four underwing engines. Three engine systems are offered.

“The first model (747-100) entered commercial service with Pan Am in 1970 and took its maiden flight from New York to London.”

On 10 February 2009, the Boeing 747 celebrated its 40th birthday and cemented its stature in modern-day affordable air travel for the masses.

While upon release, its twin aisles and spiral staircase leading to the upper deck were features never before seen on a commercial jetliner, they have now become standard attire for modern fleets that have used the 747 as a reference point for their own designs.

Because of its three-class configuration, air travel became affordable, package holidays took off and mass tourism boomed throughout the 1980s and 1990s. Soon major operators were copying its style, as the Boeing 747’s success continued.