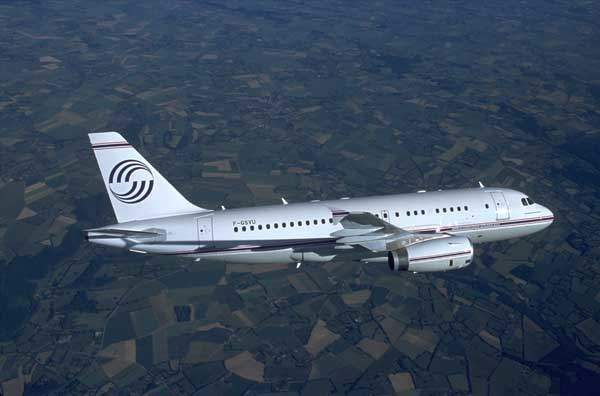 An ACJ corporate jetliner operated by Aero Services of France. 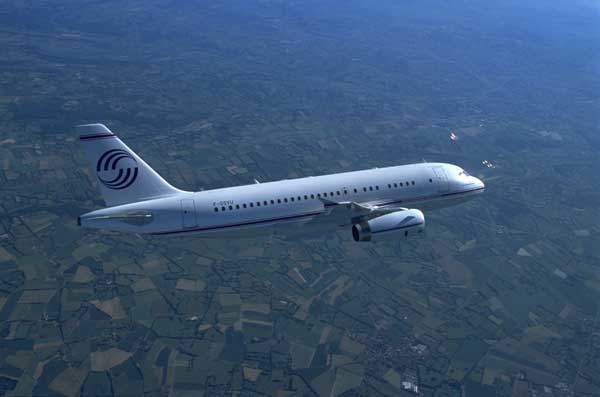 The Airbus Corporate Jetliner is based on the airframe of the A319, a twin-engine, single-aisle, medium-range airliner. 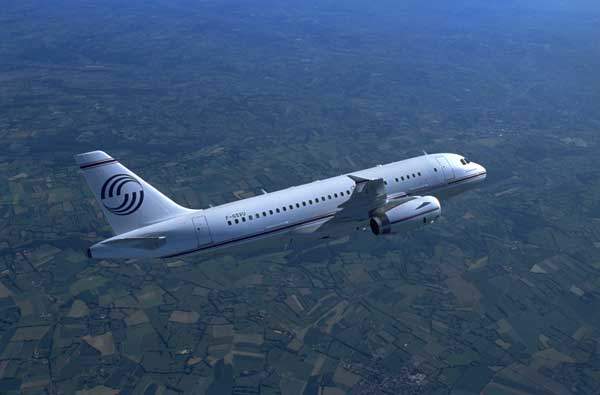 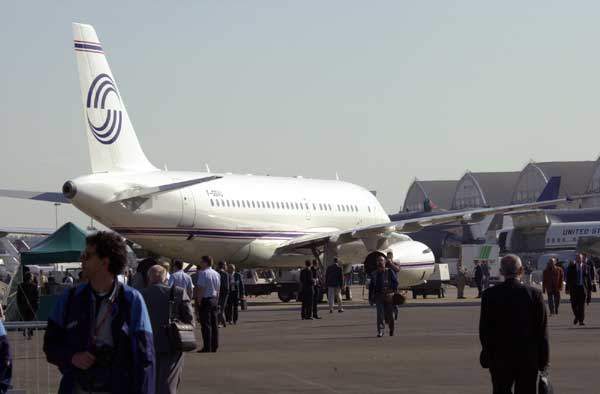 Aero Services ACJ on the ground. 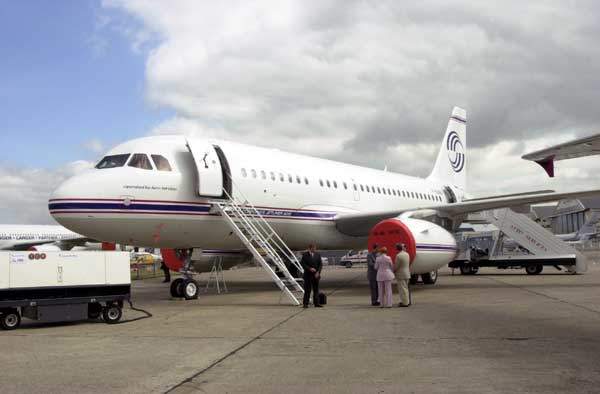 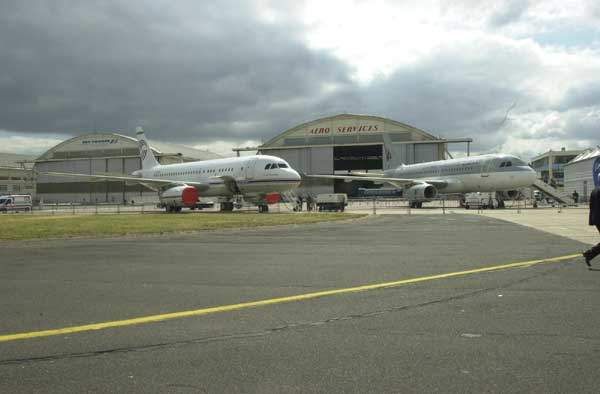 The ACJ can be operated to allow private or commercial flight &ndash; the interior can be easily converted for commercial passenger service. 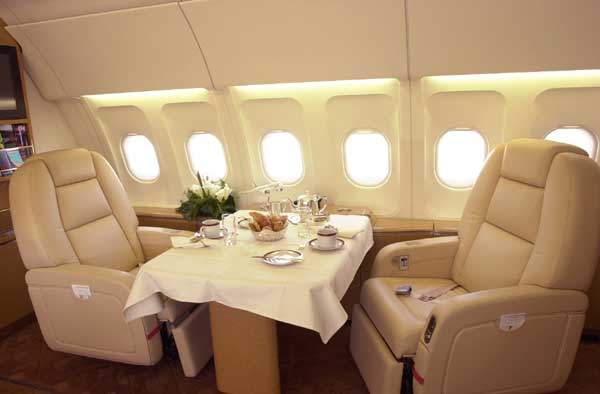 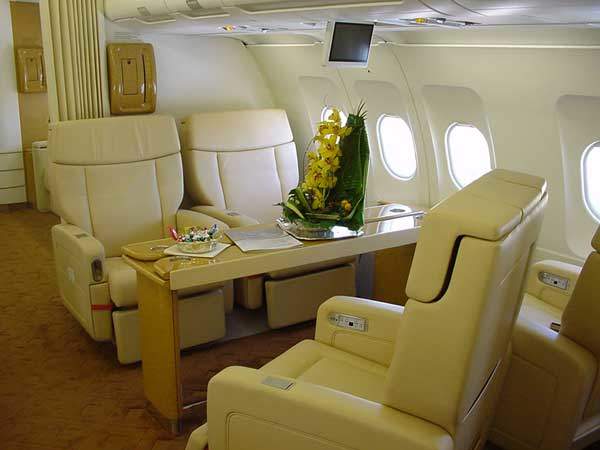 The cabin layout can be altered according to the needs of the individual client or corporate customer. 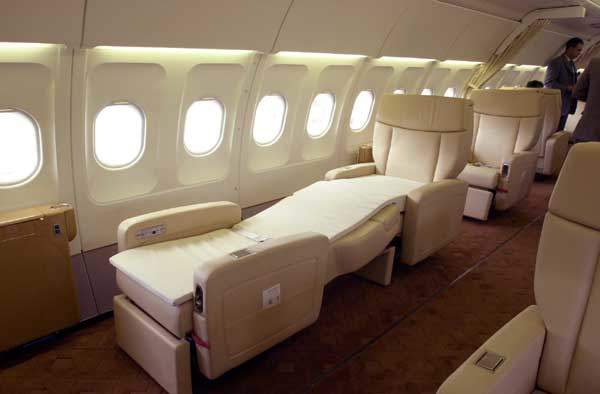 A chair that converts easily to a bed. 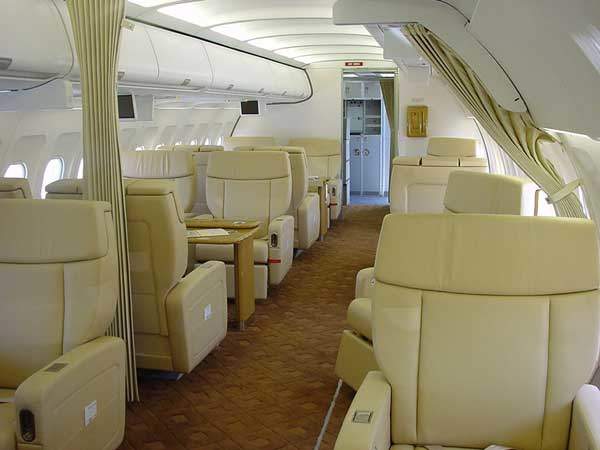 Airbus has developed the ACJ business jet, that can easily be converted to commercial passenger service. The Airbus corporate jetliner is based on the airframe of the A319, a twin-engine, single-aisle, medium-range airliner. Airbus Industrie, headquartered in Toulouse, is owned by EADS.

The A319 airframe is a short-bodied version of the successful Airbus A320 family of aircraft, with around twice the cabin width and under-floor cargo space, which can accommodate up to four times the volume of typical business jets.

The main differences between the ACJ and the A320 are the length of usable cabin, two fewer fuselage plugs (shortening the length by nearly 4m), a modified rear cargo door and the deletion of a bulk hold door and forward overwing emergency exit.

The first delivery of the ACJ aircraft was made to a Kuwaiti customer in November 1999. In October 2002, the ACJ received FAA approval for scheduled and private operation in the USA.

In June 2003, Airbus increased the baggage capacity on new ACJ models from 3m³ to 10m³ by modifications to the auxiliary fuel tanks arrangement. Other variants of the ACJ family are the A318 Elite and the A320 Prestige.

Over 160 aircraft in the ACJ family have been ordered as of August 2010 which include 100 A318 Elites, A320 Prestiges, Airbus ACJs and 50 VIP widebodies with more than 50 delivered and it is in service on every continent, including Antarctica. It is operational with: launch customer Qatar Airways, based at Doha; EADS Deutschland GmbH in Stuttgart: Twinjet Aircraft with headquarters in Bedfordshire, UK; Aero Services in France; Al Kharafi group of Kuwait, DaimlerChrysler of Germany; Blue Moon in the US; PrivatAir of Switzerland; Air Luxor (Masterjet) of Portugal; Alpha Tours of Dubai; AZAL of Azerbaijan, UB Group of India and with a number of other governments and private customers

In November 2005, an order was placed for three ACJ by the first customer from China. In March 2006, the Czech government ordered two aircraft. In May 2006, Pharmair Corporation became the first US customer for the ACJ, with the delivery of one aircraft.

Other variants of the ACJ family are the A318 Elite and the A320 Prestige. Launch customer for the A318 Elite is Comlux of Switzerland with an order for three aircraft placed in November 2005 and an additional two ordered in February 2007.

Flight testing began in October 2006 and first deliveries were in May 2007. Orders have been received for 30 aircraft. The tenth delivery of A318 Elite was made in October 2009.

An A318 Airbus was delivered to Saudi Red Crescent Authority in December 2009 as part of its expansion.

Comlux placed an order of its third ACJ in November 2009 increasing its orders in the ACJ family to ten aircraft (four A318s, three Airbus ACJs, two A320 Prestiges and one A330-200 Prestige).

The Airbus family of corporate jetliners also includes VIP variants of the A330 and A340 widebody airliners and the A380 Flying Palace, the VIP version of the double-deck airliner. The first order for the Flying Palace was placed in November 2007, by HRH Prince Alwaleed bin Talal bin Abdulaziz Alsaud.

Al Jaber Aviation became the first Middle East customer to be delivered the Airbus VVIP in August 2010 for charter flights after the delivery of its first A318 Elite.

ACJs are used by the governments of Brazil, France, the Middle East, Thailand and Venezuela.

The primary structures of the ACJ are of composite construction with aramid fibre (AFRP), glass fibre (GFRP) and carbon fibre (CFRP) reinforced plastics.

The spacious 24m-long cabin has a floor area of nearly 80m². The cabin layout can include executive suites, equipped offices and meeting rooms, a bedroom, a family living room or sitting room area and bath or shower room according to the needs of the individual client or corporate customer.

The cabin can also be designed to allow public transport flights, so that the aircraft can be operated to allow private or commercial flights. In other words, the interior can be easily converted to provide seamless commercial passenger service.

The cabin environment gives an exceptionally quiet and comfortable flight. The air conditioning system provides a constant fresh air flow at low velocity as the air conditioning manifold is situated in the fuselage recess and maintains the cabin pressure at 8.33lb/in².

The ACJ is fitted with airstairs to allow self sufficiency at airfields with limited airport facilities.

Airbus Corporate Jet Centre (ACJC) handed over its fifth VVIP cabin for an ACJ Airbus of Acropolis Aviation in May 2010. This cabin was on display to the guests at the European Business Aviation Convention & Exhibition (EBACE) 2010 in Geneva.

The new tall and wide ACJ cabin is fortified by ergonomic monuments. The new cabin can accommodate 19 passengers and two crew members.

The ACJ 17-hour flight deck has twice the volume of typical business jets and easily accommodates the pilot and co-pilot.

Each pilot has a side-stick controller allowing single hand control. The fly-by-wire system incorporates many safety features including a high level of redundancy, use of dissimilar redundancy with different computers, different microprocessors, different vendors, division and separation of each computer, the segregation of power supplies and the maximum segregation in signalling lines.

The aircraft is offered with two IAE V2527M-A5 engines or two CFM International CFM 56-5B7 developing 111.9kN. The fuel tanks have a capacity of 6,260gal (23,860l) giving the aircraft a range of over 6,500km with eight passengers. The aircraft is approved for 180 minutes ETOPS operations (extended-range twin-engine operations).

“More than 100 ACJs have been ordered and over 50 delivered.”