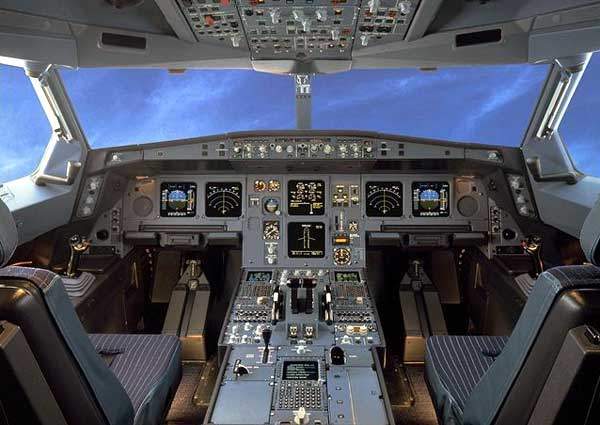 The cockpit of the A330. Fly-by-wire controls mean the pilot and co-pilot have sidestick controllers and rudder pedals. 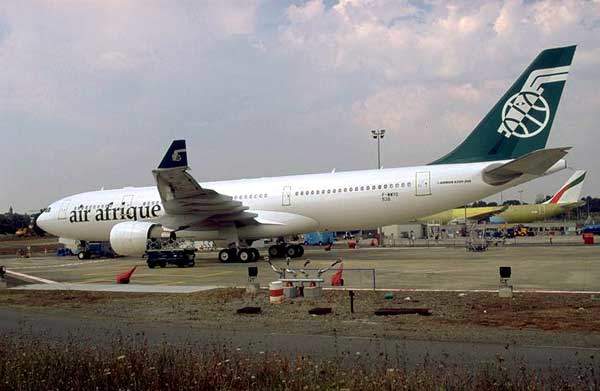 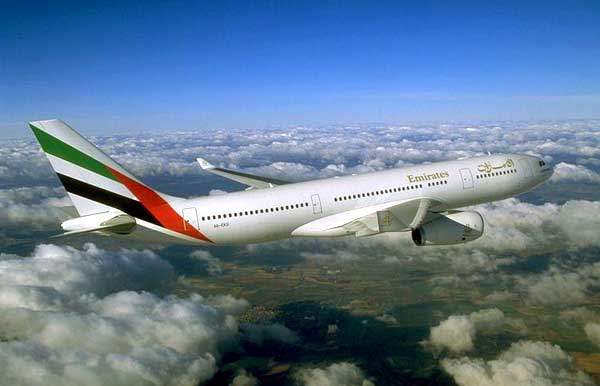 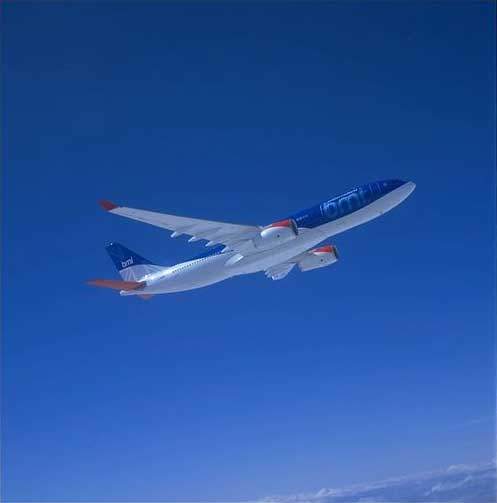 British Midland selected the Rolls-Royce Trent 772 B engines for its A330-200 fleet. 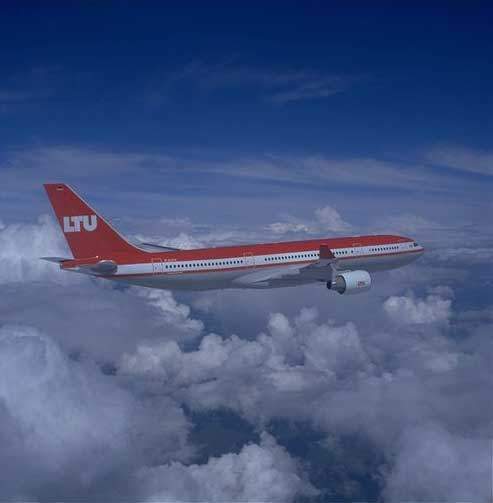 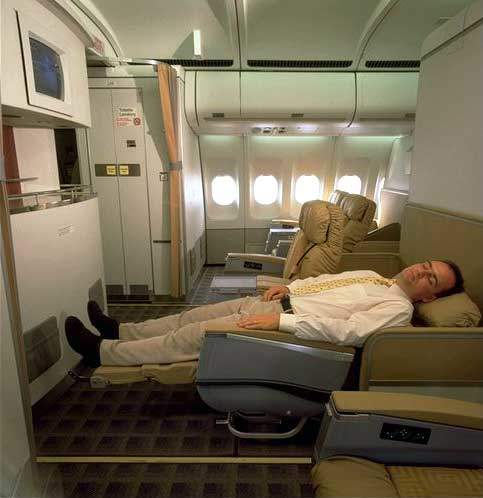 First-class cabin layout on an A330-200 in the Air Afrique fleet. 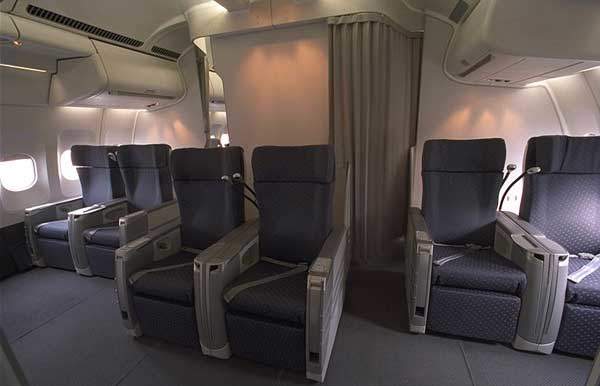 The A330 and A340 were the first airliners to be designed entirely by computer aided design (CAD). The aircraft first flew in 1992 and entered service in 1993.

The A330-200 model had not had any fatal accidents involving passengers prior to 1 June 2009, when an Air France flight from Brazil to France disappeared over the Atlantic Ocean after a possible lightning strike. It is thought the plane reported a short circuit four hours after leaving Rio de Janerio with full capacity of passengers.

The Airbus A330’s crash over the Atlantic en route to Paris reminded operators of existing procedures to be applied in the event of loss of, or unreliable, speed indication. The European Aviation Safety Agency (EASA) made the announcement that the A330s were ‘airworthy and safe to operate’.

According to the EASA, there could have been ‘a possible malfunctioning of the air speed indication system’ (pitot probes). The agency said it was analysing data ‘with a view to issue mandatory corrective action’.

Airbus A330 international orders and deliveries

Virgin Atlantic purchased six A330-300s from Airbus in January 2010. The first of three A330-200s ordered by Sichuan Airlines was delivered in February 2010.

Airbus signed a contract with Air Pacific in October 2011 to supply three A330-200 aircraft, with deliveries commencing from 2013.

Commitments to order have come from Intrepid Leasing (20), Avion Aircraft (six) and MNG Airlines (two plus one). The A330-200F completed its maiden flight in November 2009 and entered service with Ethiad Airways Cargo in July 2010. The maiden flight of the second A330-200F aircraft took place in January 2010.

Airbus Industrie is a consortium formed by EADS and BAE Systems. EADS, the European Aeronautic Defence and Space company, was formed by a merger of Aerospatiale-Matra of France, Daimler-Chrysler Aerospace of Germany and CASA of Spain (former members of Airbus). In October 2006, BAE Systems completed the sale of its shareholding to EADS, which is now the sole owner of Airbus.

In January 2004, the UK Government announced the selection of a multirole tanker transport based on the A330-200 as its future strategic tanker aircraft (FSTA). The aircraft was proposed by the air tanker team, led by EADS. The maiden flight of the first FSTA was successfully completed on 4 June 2009 and it is scheduled to enter service with the RAF in 2011. The RAF’s fleet will have about 14 FSTA A330-200 aircraft in the near future.

Australia ordered five A330-200 MRTT in December 2004 and the aircraft was also selected by the United Arab Emirates in February 2007, with a requirement for three aircraft.

A version of the A330-200 tanker, the KC-30, was chosen by the US Air Force in February 2008 for its tanker aircraft replacement programme to replace the KC-135. Northrop Grumman, teamed with EADS North America, proposed the aircraft, to be designated the KC-45.

The first A330-200 aircraft was delivered to Afriqiyah Airways in August 2009. It can accommodate 230 passengers in a two-class cabin. It is primarily used for long-haul operations on routes from Tripoli to Africa and Europe.

Airbus signed a memorandum of understanding (MoU) with Turkish Airlines during the Le Bourget Airshow in June 2009 to provide seven A330-300 aircraft. The aircraft is equipped with Rolls-Royce engines and can cater to 289 passengers in a two-class configuration. The first A330-300 aircraft was delivered in September 2010.

The same two-crew flight deck is installed in the A330 and A340 and is very similar to the flight deck of the A320.

The high level of operational commonality in the Airbus fly-by-wire aircraft gives enormous logistical benefit and cost saving. A pilot can transfer from a 107-seat A318 to the A330 aircraft and to the 380-seat A340-600 or vice-versa with only a minor amount of additional training.

The pilot and co-pilot have sidestick controllers and rudder pedals. There are six main displays in the cockpit, with a duplicated set, one for each pilot, of primary flight displays and navigation displays.

Avionics onboard on the A330 long-range twin-engine airliner

The aircraft’s fly-by-wire system is configured around three primary and two secondary flight control computers (FCPC and FCSC), which all operate continuously. The flight management and guidance and envelope computers control the aircraft at every phase of the aircraft’s flight.

The system has the same flight envelope limit protection as the A320, (stall and excess speed protection and protection against manoeuvres exceeding the aerodynamic and structural limits of the aircraft) but maintains the protection for a longer period of time than that of the A320.

Airbus has developed the future air navigation system, (FANS-A) which integrates a Smith’s digital control and display system and a Honeywell flight management system. The FANS-A system is fitted on new build A330 and A340 aircraft and can be retrofitted on existing A330/340 aircraft.

The aircraft is powered by two turbofan engines mounted on underwing pylons. The airline can specify the 300kN General Electric CF6-80E1, the Pratt and Whitney PW 4168A or the Rolls-Royce Trent 772B engines.

Fuselage of Airbus’ widely used A330 / 340 family of aircraft

"The same two-crew flight deck is installed in the A330 and A340 and is very similar to the flight deck of the A320."

The A330 and 340 family features a six abreast seating arrangement in first and business class, so each passenger has an aisle or window seat. Economy-class passengers are generally seated in an eight abreast layout with no passenger being more than one seat away from an aisle.

The front and rear cargo doors are of sufficient width and height to accept standard pallets (2.24m×3.17m) or LD3 containers. The underfloor cargo hold can accommodate up to 32 LD3 standard containers or 11 pallets. A bulk cargo hold of capacity 19.7m³ is situated just aft of the main rear cargo hold.

Some airlines have flown regional overnight freight-only services with the A330 aircraft after a full day’s passenger service, showing that the aircraft is able to operate profitable cargo flights even without a single passenger.

In March 2009, Airbus introduced its newly designed seating layout for A330’s first class. This layout allows a party of two to sit face to face and talk over a table. When alone the passenger can fill-in the space between the seats and turn it into a bed.

CIT Aerospace, an operating unit of the CIT Group financial services corporation based in USA, has ordered 35 Airbus single-aisle aircraft and 15 Airbus A330s, including the planned A330-500 aircraft. As of September 2008, 199 orders had been received from CIT Group, including 157 A320 aircraft, 30 A330s, seven A350s and five A319s for both executive and private use.

The A330-500 product development study aircraft will have a capacity for 200 to 275 seats, higher payload and range as well as a high level of commonality with the smaller A320 family and the larger A330/A340 family.