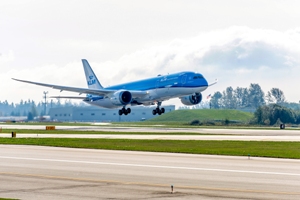 The delivery is a part of KLM’s aim to expand and revamp its fleet. The delivery was made via leasing company AerCap.

The 787-9 will be flown on KLM’s Amsterdam, Abu Dhabi and Bahrain service route.

KLM president Pieter Elbers said: "This aircraft symbolises a new phase in the future of KLM.

"Investment in our customers is one of our priorities. This efficient aircraft is part of that investment."

"This aircraft symbolises a new phase in the future of KLM."

KLM was founded in 1919 and has taken delivery of more than 200 Boeing aircraft.

Boeing Commercial Airplanes European Sales vice-president Todd Nelp said: "The KLM brand is synonymous with innovation, reliability and outstanding customer service, which will be perfectly complemented by the addition of the 787 to the airline’s fleet."

In October, Boeing signed an order with El Al Israel Airlines for up to nine 787 Dreamliners, valued at more than $2.2bn. El Al will also lease six 787s from independent leasing companies.