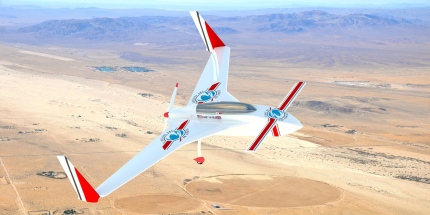 The Long-ESA is being developed for its first test missions in July 2012.

In July 2012 an aerospace company called Flight of the Century will endeavour to set the fastest top speed and highest altitude records for a manned electric aircraft. These world records will be attempted in their electric-powered plane, the Long-ESA (ESA stands for "electric speed and altitude"), which has been especially designed by the Flight of the Century team, headed up by engineer and CEO Chip Yates.

Plans for the Long-ESA were developed following the success of the world’s fastest electric-powered superbike – where speeds of 200mph were reached in 2010 and 2011 – which was created by Chip Yates and his team of aerospace engineers.

"We had a great run with the electric superbike, inventing a new Kinetic Energy Recovery System (KERS), refining our EV powertrain control software, filing patents, racing against gas-powered superbikes and beating them, and setting world records at the Pikes Peak International Hill Climb and the Bonneville Salt Flats," said Yates, who recently retired the bike and donated it to the Petersen Automotive Museum in Los Angeles.

Having raced the bike to success himself, Yates currently flies six days a week and is working up his flying hours so that he can pilot the forthcoming electric test flights himself.

"Following our electric superbike success the next logical question was how we can best deploy the knowledge and technology we developed on that EV program to something bigger and better," explained Yates. "Our team had the idea to attempt the historic Charles Lindbergh transatlantic flight in an all-electric airplane that we would create."

Lindbergh became famous for his non-stop flight of 3,600 miles in a one-man, single-engine purpose-built Ryan monoplane from New York’s Long Island to Le Bourget in Paris in May 1927. The Flight of the Century team intends to fly the same route at equal or more than Lindbergh’s average speed of 108mph and at the same altitude (so the flight is meaningful from a technology advancement standpoint). It is planned for 2014 and the electric aircraft will take off at or near JFK and land in Paris.

Demands on efficiency and the need to portray a more eco-friendly image have resulted in a flurry of green unveilings. Liam Stoker attended the 2011 Paris Air Show to investigate what lays in store for green aircraft and to find out more about progress in biofuels, improved power consumption and the record-breaking Solar Impulse.

Yates and his team realised that such a feat would be technically impossible without big and disruptive innovation and took up the challenge to develop technology that would enable such a mission to take place. The answer came from the development and patent filing on the idea of recharging an electric airplane mid-air with tethered unmanned aerial vehicle (UAV) battery pods that rendezvous along the route of flight.

The Long-ESA mission was devised so that the mid-air tethering UAV battery pods technology could be tested and flown. A Burt Rutan-designed Long-EZ aircraft has been undergoing an all-electric conversion including installation of a 258 horsepower liquid-cooled motor, and renamed the Long-ESA, in preparation for its first test missions in 2012.

Along with aiming to achieve speed and altitude world records and serving as a flying test bed for new UAV battery pack tethering and docking technology, the Long-ESA is being fitted with the company’s patent-pending Jettison & Balance System (JBS) battery pack shuttling technology. By performing the tethering, JBS and world record missions, the Long-ESA plays a near-term supporting role in the company’s extensive plans for their all-electric version of the Lindbergh flight.

For missions where tethering to UAV battery pods is not preferred, the company has developed JBS battery pack shuttling technology where a number of battery packs exist internal to, or in a pod below the plane. "As each pack is depleted it is jettisoned from the pod and lands at a ground-based collection station via a GPS guided parachute while the remaining packs are moved to rebalance the center of gravity of the plane," explained Yates.

"The Long-ESA mission was devised so that the mid-air tethering UAV battery pods technology could be tested and flown."

"This technique basically doubles the range of an electric aircraft through continuous weight reduction as packs are depleted and dropped for recovery and recharging by ground-based collection stations. The Long-ESA will help us rapidly develop these critical pieces to long-range flight."

During the Long-ESA world record attempts, no jettisoning will be used as the official sanctioning body, the FAI (Fédération Aéronautique Internationale), does not allow anything to be dropped from a plane for official record attempts. However, after the initial world record flight attempts, the role of the Long-ESA will transition to a flying test platform for JBS and mid-air tethering development.

The development and perfection of the UAV battery pack tethering and docking technology is what Yates describes as his "first order of business". His intention is to "smash through the barriers that prevent long-range flight from becoming a near-term reality". This and the JBS technology will create what will be identified as "Infinite Range Electric Flight™ technology".

The concept of mid-air refuelling first occurred in 1921 where a "wing walker" called Wesley May climbed from a Lincoln Standard to a Curtiss JN-4 with a can of fuel strapped to his back. The concept developed but it was never taken up commercially as designers preferred to build aircraft with large internal fuel tanks.

The UAV tethering and docking concept involves flying an electric "mothership" which is designed to dock with flying supplemental battery packs configured as UAVs. To collect data for the upcoming Lindbergh transatlantic airplane build, the Long-ESA is being built with a battery pod attached under the fuselage which contains a series of lithium-ion packs (each at 450 volts DC) that will be jettisoned out of the pod of a GPS-guided parachute. Five flying UAV battery packs are currently planned for the Lindbergh flight in 2014.

One of the major issues surrounding the use of UAV refuelling is how feasible the idea is for increased payloads and commercial operations. Aerial refuelling is used in the military but currently no commercial aircraft (including cargo) uses this method. As a result the question of how certification authorities could be convinced that it is safe for an external, unmanned aircraft to dock and tether with an electric commercial aircraft remains to be answered. However, could the development of this technology mean it is possible for all-electric aircraft to take over from fossil fuel?

"One of the major issues surrounding the use of UAV refuelling is how feasible the idea is for increased payloads and commercial operations."

Yates believes that Flight of the Century’s approach is scalable, even up to the air transport category, but at these early stages has not yet assigned resources to develop this aspect, wishing to remain focused on properly executing the small scale strategy in the short term.

"For large scale operations we would not propose our parachute approach, but rather the dropping and re-docking of the flying UAV battery packs during flight," said Yates. "There is no reason a large flying UAV battery pack cannot fly up to and be tethered to a large aircraft carrying passengers, freight or military equipment and when the UAV is depleted, it drops away and glides to a landing at a predetermined recovery and recharge location."

He acknowledges, however, that for the short term at least electric airplanes are feasible for specific missions, such as when quiet operations are required or when the military demands a low heat signature for stealthy operation, but not as a direct replacement for all fossil fuel burning aircraft.

"Our mission is to impact the future of aerospace technology by providing workable solutions for long-range electric flight. With deliverables of the Long-ESA this year, a 24-hour UAV docking flight demonstration in 2013, and the electric Lindbergh flight in 2014, we have a very exciting roadmap in place to get us there."