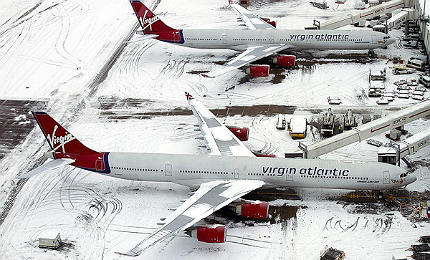 Since its first development at the University of Manchester in 2010, graphene has been lauded as a modern miracle material. Promising to revolutionise fields including electronics and aircraft manufacture, the results saw its pioneers Andre Geim and Konstantin Novoselov win the 2010 Nobel Prize in Physics.

Since then, progress has been quietly productive. The UK Government, acknowledging the material’s potential, pledged £22m in December 2012 to aid with its commercialisation. The Graphene Flagship was later established, incorporating 74 organisations from 17 European countries, promising an investment of €100m over ten years to further the understanding of the material and its uses.

Lightweight, stronger than steel and malleable, the carbon-based material has been proposed for uses in multiple fields, but perhaps proposes to make the greatest strides in aviation.

Hallmark of the carbon century

"The UK Government, acknowledging the material’s potential, pledged £22m in December 2012 to aid with its commercialisation."

Composed of pure carbon, atoms in graphene are arranged in regular hexagonal patterns in a similar fashion to graphite. Atoms are densely packed in a honeycomb crystal lattice, boosting the material’s strength while remaining incredibly lightweight. One square metre of graphene would weigh just 0.77 milligrams. Graphene’s light weight shouldn’t fool anybody though; it has a breaking strength more than 100 times greater than a steel film of the same thickness.

University of Technology Sydney lead researcher Ali Reza Ranjbartoreh oversaw the development of graphene paper, which is capable of being reshaped and reformed from its original raw material state. Heralding the material as "lighter, stronger, harder and more flexible than steel", Ranjbartoreh claimed graphene paper would be an ideal material for the development stronger and more fuel-efficient aircraft.

This development hasn’t gone unnoticed by the aerospace industry. Airbus’s sponsorship of the Graphene Flagship will attest to its interest in the material, while Boeing has also invested in the use of composite materials in aircraft manufacture, with composite materials comprising up to 50% of the primary structure of the company’s 787 Dreamliner aircraft.

From a pure business perspective, graphene could pave the way for a much stronger post-recession aerospace industry. The premise of lighter materials strong enough to be used in the manufacture of aircraft means that not only could jets be designed to be larger and fit more passengers, but they could also run on much less fuel. Rising fuel costs and the risk of emissions trading schemes have both been targeted as key threats to the aviation market, and graphene proposes to address them both in one fell swoop.

Graphene’s almost unique properties make it ideal for use in electronics. Aside from the obvious use of making individual aircraft components lighter, graphene’s flexibility could see the creation of flexible and lightweight electronic displays. Thinner and lighter in-flight entertainment suites could feasibly be manufactured, resulting in further weight reductions.

Furthermore, graphene could be used to replace the tangle of conventional wiring that is used within an aircraft due to its electrical conductivity. Conventional commercial aircraft can use anything up to 60 miles of copper wiring to transmit power and communication; a substantial load for any aircraft to bear.

The potential to replace that with relatively simple nano-enhanced wiring could prove to be too difficult to resist, despite further technological understanding of the material being necessary.

Thwarting ice with a graphene jacket

Outside of its much vaunted manufacturing potential, SAAB has proposed a significantly more novel way in which graphene could be used within the aerospace industry. Ice has long been a thorn in the side of commercial airliners, particularly those forced to reside at airports in frigid temperatures, causing delays and cancellations to flights. Current de-icing techniques either add unnecessary weight to the aircraft, in the form of heating wires fixed inside the aircraft’s structure, or hamper green performance due to de-icing chemicals’ notoriously harmful effect on the environment.

"One square metre of graphene would weigh just 0.77 milligrams."

Using graphene’s conductive properties and thinking outside the box, SAAB filed a patent application in February 2013 detailing a de-icing process with graphene at its core. Nanoplatelets of graphene are mixed into a polymer resin, with the resin applied to the aircraft body and its components to form a tight jacket around it. An electrical current can then be passed through this conductive jacket – either across the entire body of the aircraft or to specific components, such as the wings – providing heat, which would in turn melt the ice.

Given the physical properties of the graphene-soaked resin, it provides no detrimental effect on aerodynamics and little weight, despite being applied liberally to all of the aircraft’s fixtures and components. The high conductivity of the resin also requires little electricity to be effective, resulting in extremely low power consumption for its capabilities. The strength of the resin also makes SAAB’s de-icing technique more robust than current integrated methods due to the nanostructure’s strength.

Not just an ice-breaker

"From a pure business perspective, graphene could pave the way for a much stronger post-recession aerospace industry."

The graphene jacket also lends itself to uses other than de-icing aircraft, tapping into the full spectrum of properties the material possesses. The strength of any component coated in the resin is increased, a valuable proposition given the cost of downtime associated with broken parts, and the layered nature of the resin means that it also acts as an insulator for any heat produced.

It is thought the outer surface could also provide lightning protection, protecting the aircraft and de-icing system from lightning strikes and erosion related to other freak weather events, such as driving rain, hailstones and sandstorms. In essence, the resin could be tailored with separate layers designed to provide differing characteristics, providing a multipurpose coat that does far more than what it says on the tin.

The excitement surrounding graphene and its potential to revolutionise various elements of the aviation industry is palpable, but expectation of any carbon revolution may have to wait. Further technological developments are required before graphene can be separated from naturally-occurring graphite economically enough to be used in industrial processes.

While always quick to embrace technological advancements, the aerospace industry has been known to stick with what is familiar, probably best typified by the way in which Boeing’s 737 aircraft – introduced in 1968 – is still in production and used almost religiously by airliners the world over. The lure of graphene and its miracle-like properties could, however, be the material to change that dependence.

Having slumped into an almost terminal decline during the global recession, green shoots of recovery are now evident within the business jet market.

A stay in space for astronauts and tourists alike could soon take place within an inflatable module fixed to the side of the ISS.