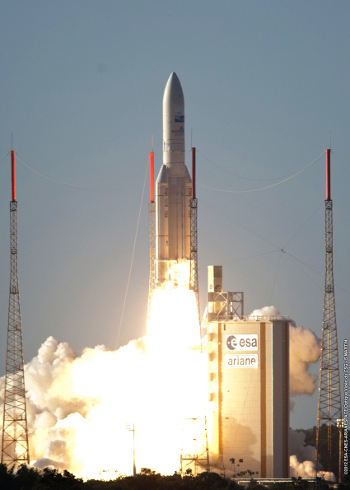 European commercial launch services provider Arianespace is now set to launch two communication satellites, ASTRA 2F and GSAT-10, on 28 September from the spaceport at Kourou in French Guiana after conducting checks on the Ariane 5 rocket.

The two satellites were scheduled to be launched initially on 22 September, but Arianespace postponed it after finding a technical fault with the designated flight, VA209.

A small amount of damage was found in the air hose connecting the launch pad and rocket, with dust particles stuck inside critical moving parts.

On 28 September, VA209 will deliver a payload mass of some 10.2t, which includes 9.4t for two satellite passengers into geostationary transfer orbit.

"The two satellites were scheduled to be launched initially on 22 September, but Arianespace postponed it after finding a technical fault with the designated flight."

It will carry Ku- and Ka-band payloads in order to offer high-performance direct-to-home (DTH) and next-generation broadband services in Europe, Middle East and Africa.

ASTRA 2F spacecraft will be positioned at 28° east and is expected to deliver programming to over 13 million satellite homes and more than three million cable homes, 700,000 internet protocol television (IPTV) homes in the UK and Ireland.

GSAT-10, developed by the Indian Space Research Organisation (ISRO), will offer Ku- and C-band relay capacity from an orbital position of 83° east.

This platform is based on ISRO’s I-3K satellite bus with a power capability of 6kW.

Image: ASTRA 2F and GSAT-10 were due to be initially launched on 22 September, which was postponed due to technical issue in Ariane flight VA209. Photo: courtesy of Arianespace.