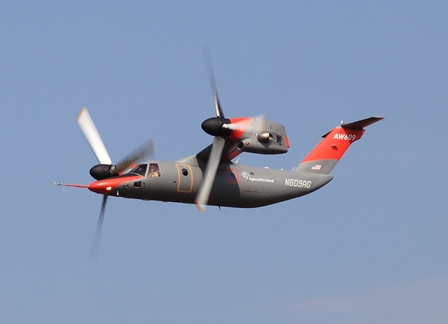 AgustaWestland is trialling several aerodynamic improvements that will improve the performance of the AW609 TiltRotor.

The company conducted the first flight of a modified vertical tail fin, which is a part a package of product improvements, on AW609 TiltRotor prototype #2 at its Cascina Costa flight test facility in Italy.

The package of product improvements also includes a new, more aerodynamic, design for the engine exhaust nozzles, as well as changes to the prop-rotor spinner cones.

When combined, these modifications cut the drag factor of the AW609 TiltRotor by nearly 10%, while providing a considerable weight reduction, which results in a performance rise.

AW609 programme manager Clive Scott said: "These aerodynamic improvements, new avionics, new cockpit display system and a large number of other improvements will together give the aircraft greater performance and mission capabilities, making it even more attractive for carrying out a wide range of missions which can benefit from its much higher cruise speed, high altitude cruise capability and longer range, when compared to existing helicopters or other proposed high speed rotorcraft."

The new improvements also include the use of an upgraded version of the Pratt & Whitney Canada PT6 engine on the AW609 TiltRotor, providing the aircraft with improved performance capabilities and the latest safety enhancements.

The aircraft will be equipped with a fully integrated cockpit from Rockwell Collins.

"These aerodynamic improvements, new avionics, new cockpit display system and a large number of other improvements will together give the aircraft greater performance and mission capabilities."

Based on Rockwell’s Pro Line Fusion system, the cockpit allows AgustaWestland to adopt the latest in commercial aircraft cockpit technologies.

The cockpit suite will offer the crew with increased situational awareness and reduce the workload for pilots.

BAE Systems is providing the aircraft with an improved flight control computer, which is at the core of AW609 TiltRotor’s triple redundant fully digital fly-by-wire flight control system.

The computer will include the AgustaWestland control laws and flight control software, along with digital engine control system.

The latest modifications are part of the overall AW609 TiltRotor programme re-baselining, targeted at reducing customer acquisition and operating costs, as well as offering performance and technology improvements.