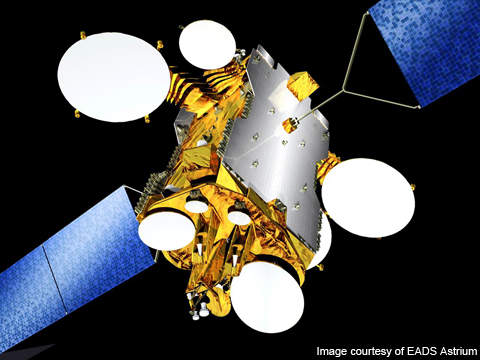 Y1A is designed and manufactured jointly by EADS Astrium and Thales Alenia Space. 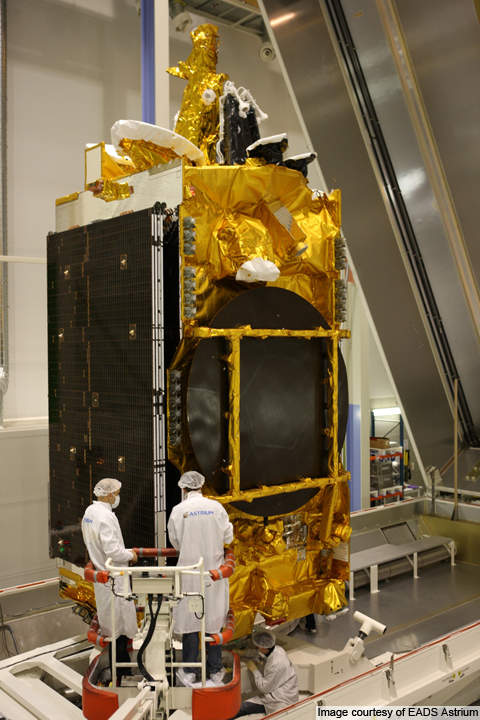 Yahsat 1A packing for shipment to Kourou launch site, Toulouse in February 2011.

The Y1A was launched atop the Ariane 5 launch vehicle.

Yahsat Y1A is a communication satellite launched principally used to provide high definition television (HDTV) and fixed satellite services to telecommunication providers and governments in Europe, Middle East, Africa and South-West Asia. It was launched on 22 April 2011 and is positioned at 52.5° east.

The Y1A was transported to the European Spaceport located in Kourou, French Guiana, on 18 February 2011 for launch into geostationary earth orbit from a Eurostar-3000 platform atop the Ariane 5 ECA launch vehicle . Being a dual payload launcher, the Ariane 5 ECA will simultaneously carry Orbital Sciences Coroporation’s Intelsat New Dawn satellite.

Yahsat awarded a contract to EADS Astrium on 21 February 2011 to render maintenance, operation and logistical support services to the Y1A satellite for five years.

The Y1A is the maiden satellite built by EADS Astrium for Yahsat. Designed for a lifespan of 15 years, the satellite weighs around 5,965kg and consumes 15kW of power. It is fitted with two stretched solar panels.

“The Y1A is the maiden satellite built by EADS Astrium for Yahsat.”

Yahsat awarded a $1.6bn turnkey contract to the Thales-Astrium team to design, build and launch two communication satellites — Y1A and Y1B — along with associated ground infrastructure in August 2007. The Y1B, the successor of the Y1A, is scheduled for launch in the fourth quarter of 2011.

Thales Alenia Space delivered the communication equipment for the Y1A to EADS Astrium in February 2010 for incorporation into its satellite bus.

The launch of Y1A was initially scheduled for March 2011 but delayed due to a technical bug in the launch vehicle. A sucessful launch took place on 22 April 2011.

The Y1A is a digitally channelised transponded satellite and will render communication capacity, connectivity and flexibility. The 14 C-band (eight of 36MHz and six of 54MHz), 25 Ku-band and one Ka-band active transponders installed in the spacecraft will be connected to four gateway beams including Europe, Middle East, Africa and south-west Asia.

The Ku-band transponders will provide HDTV services to more than 24 countries across the coverage area. The C-band transponder will render telecom, corporate data networks, internet trunking and a global system for mobile backhauling services.

Yahsat will be the first satellite operator in the region to render highly secure military communication services to the UAE armed forces through its Ka-band payload.

The Y1A will be carried atop the Ariane 5 ECA rocket launcher from the Guiana Space Centre in French Guiana. The Ariane 5 can lift heavy spacecraft and is built by ArianeSpace. Astrium rendered all Ariane 5 stages, payload bays, flight software and sub-assemblies.

“The Y1A is controlled by professional UAE satellite controllers located at the Yahsat control station in Al Falah, Abu Dhabi.”