Altitude at Release from WhiteKnight Aircraft 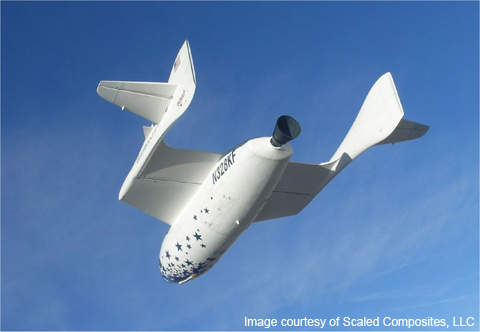 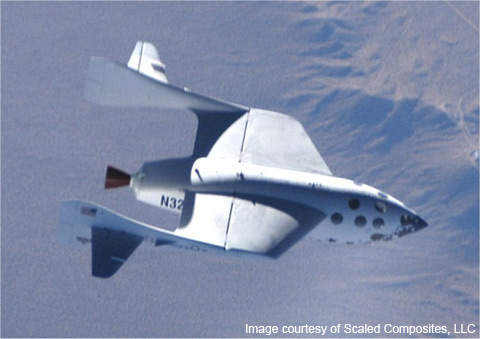 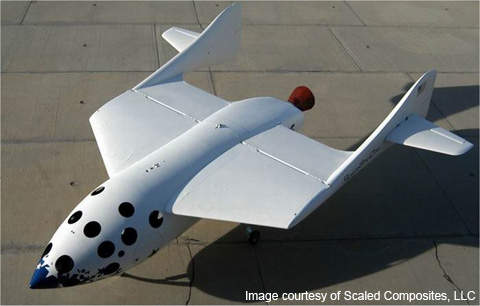 SpaceShipOne is the first of a family of commercial suborbital and orbital spacecraft that will be owned and operated by the Virgin Galactic spaceline company. 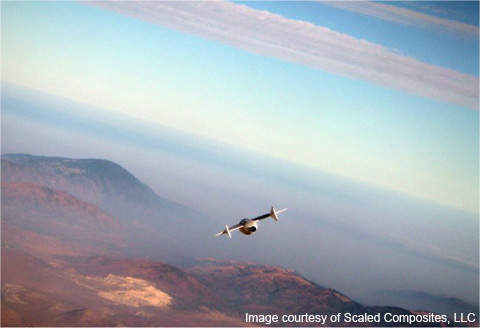 Sunrise over the Mohave desert as SpaceShipOne glides in to land. 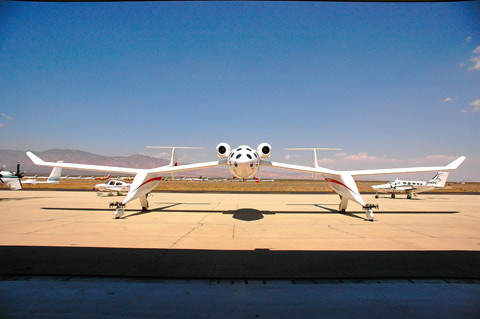 The WhiteKnight carrier aircraft carries the SpaceShip vehicles to an altitude of 50,000ft for air launch. 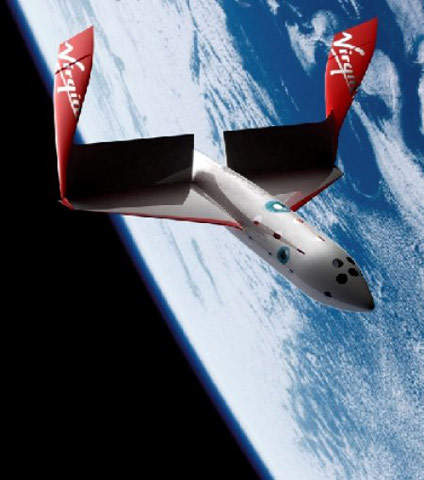 SpaceShipTwo will provide six passengers per flight with the experience of leaving earth's atmosphere. 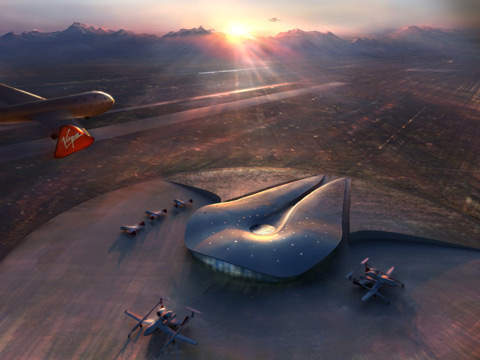 Possible design of the future Spaceport. 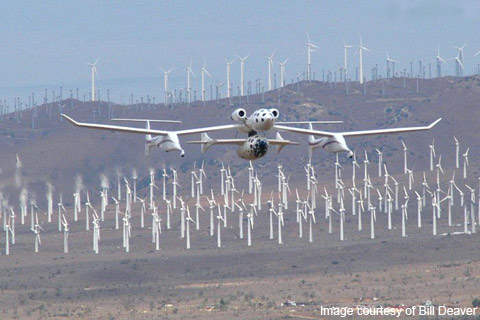 From take-off to an altitude of 50,000ft, the spacecraft is attached to the mothership, the WhiteKnight carrier aircraft. 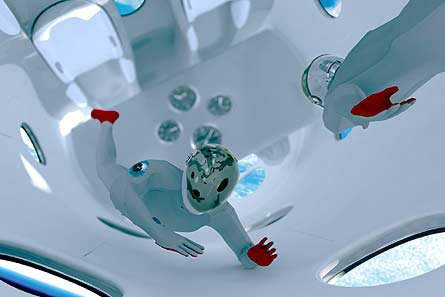 The SpaceShip passengers will experience zero gravity weightlessness for about five minutes. 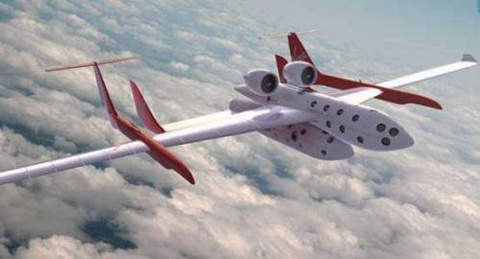 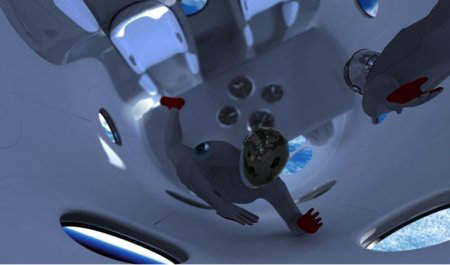 Passengers will be able to carry out physical manoeuvres and exercises in zero gravity and also view the earth and space during the flight. 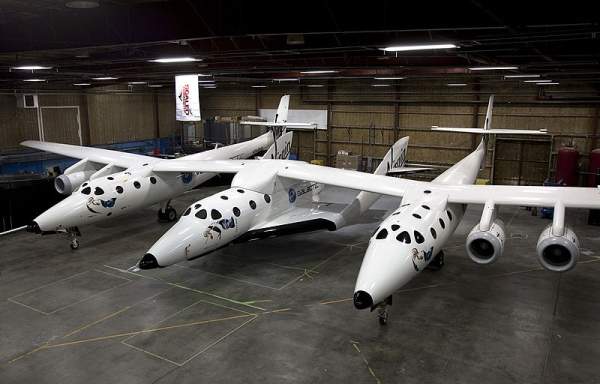 SpaceShipTwo attached to its mothership, White Knight Two, inside a hangar in Mojave, Caalifornia, US. Image courtesy of Virgin Galactic.

The Spaceship Company will licence the spacecraft technologies under an agreement with Scaled Composites and will carry out the development of the operational systems, including the SpaceShipTwo suborbital space vehicle, the future orbital space vehicles and the carrier aircraft, the WhiteKnight Two aircraft (WK2). The Spaceship Company will also carry out the marketing of the space vehicles and the carrier aircraft to spaceflight operators.

The VSS Enterprise, designed and developed by Burt Rutan and attached to the Mojave Air and Spaceport aircraft carrier, performed a two-hour-54-minute flight in March 2010. It accommodates six passengers and two pilots. The test flight programme will continue through 2010 and 2011.

On 21 June 2004, SpaceShipOne made history by becoming the first privately-funded manned spacecraft to leave the earth’s atmosphere, reaching an altitude of 328,491ft (62 miles or 100km). On 4 October 2004, SpaceShipOne became the first privately funded manned spacecraft to exceed an altitude of 328,000ft twice within 14 days, thereby winning the $10m Ansari X-Prize. The spacecraft reached an altitude of 367,442ft (69.6 miles or 112km). Around 600 people are currently employed on the project, a figure that will increase to 1,100 during the peak time of construction.

SpaceShipOne is the first space vehicle of this series and was designed and built by Space Composite. Three SpaceShipOne vehicles were built at the Scaled Composites aerospace facilities at Mojave Air and Spaceport near Mojave, Southern California and near the USAF Edwards Air Force Base.

"The Spaceship Company will licence the spacecraft technologies under an agreement with Scaled Composites."

SpaceShipThree is a proposed family of air vehicles for orbital flight.

The WhiteKnight Two carrier aircraft is flown by two pilots and is approximately of similar size to a Boeing 737 with an estimated rough order-of-magnitude take-off weight of 65,000kg.

White Knight Two (WK2) was rolled out in July 2008 and performed a successful maiden flight on 21 December 2008. The aircraft flew at an altitude of 16,000ft (4,879m) after an hour from take-off. It is powered by four Pratt & Whitney PW308A turbofan jet engines. The WK2 can support four daily space flights with 24-hour operation and is equipped with state-of-art avionics.

The SS2 will be carried by White Knight Two to 50,000ft (16km) before the spaceship is dropped and the rocket motor is fired to launch the craft into space from that altitude.

SpaceShipTwo has been designed avoiding complexity, with a minimum number of moving parts but with multiple levels of redundancy in all the key systems in order to provide an extremely safe and robust system at all stages of flight. Commercial operations are scheduled to begin upon completion of a full test programme.

The construction of SS2 began in 2007. The first phase of rocket motor test flight was completed in May 2009 and SpaceShipTwo was first unvelied to public on 7 December 2009. Commercial flights are expected to begin in 2012, with the Virgin SpaceShip Enterprise, the maiden Virgin Galactic SpaceShipTwo aircraft for commercial flight.

"The WhiteKnight carrier aircraft carry the SpaceShip vehicles to an altitude of 50,000ft."

The cabin is about the size of a Gulfstream G550 cabin, approximately 1,100ft³, and accommodates two pilots and six passengers.

The spacecraft is equipped with distinctive feathering wings. The wings are folded up in space, providing a feather or shuttlecock effect with extremely high drag for re-entry. This mechanism allows deceleration to occur at a significantly higher altitude than in previous space flight re-entries.

In the past, one of the greatest risks was the re-entry phase into the earth’s atmosphere and the feathering design greatly reduces that risk.

When the spacecraft is in contact with the earth’s atmosphere the feathered wings stabilise the spaceship in the correct attitude without pilot input, so the feathering wing design aligns the spaceship automatically, giving the pilot a less-critical flight-control task at re-entry.

SpaceShipTwo is of a lightweight composite material construction rather than of metal construction as in the space shuttle design and also does not feature a thermal protection system. The feathering wings provide high altitude rather than lower altitude deceleration in the atmosphere, so the thermal protection system installed on conventional designs is unnecessary.

SpaceShipTwo is air-launched from a carrier aircraft rather than the ground, which brings advantages in greater safety and reduced environmental impact.

The vehicle is powered by a single hybrid rocket using solid fuel and liquid oxidiser, rather than separate solid and liquid rocket boosters and engines.

"SpaceShipTwo has been designed avoiding complexity, with minimum moving parts."

Spaceport America, near Upham in New Mexico, is the world’s first built-for-purpose commercial spaceport. The contract for the construction of the 110,152ft² hangar and terminal facility was awarded to New Mexico contractor by the New Mexico Spaceport Authority (NMSA) on 30 November 2009.

The construction work on a 10,000ft (3,048m) long runway which is currently under progress is scheduled for completion in mid 2010 with terminal hangar facility expected to be complete in early 2011.

The hangar and terminal is a low-lying construction that uses natural earth as a berm. It utilises passive energy for heating and cooling and photovoltaic panels for electricity and water recycling. Design features include a rolling concrete shell which acts as a roof with large windows opening to a view of the runway and spacecraft.

The final design of Spaceport America, which uses a combination of geo-thermal, solar and wind power to create a lower carbon footprint, were displayed in January 2008.

The company is also looking at other potential spaceport locations around the world for future operations. Virgin Galactic signed an agreement with Spaceport Sweden in January 2006 to carry out studies leading to an operational agreement that this would be the first spaceport outside USA for Virgin Galactic flight campaigns. The studies include the feasibility of flights from Sweden into the Aurora Borealis (Northern Lights). The initial feasibility studies were completed by January 2008.

Spaceport America broke ground in New Mexico on 19 June 2009. The facility will allow private astronauts to take tourist suborbital spaceflights and bring down the cost of commercial space travel.

The spaceport features a cost-effective and energy-efficient green design. The terminal hangar was built according to the US Green Building Council’s LEED rating system.

While, the Mexican Government invested about $200m on its development, Virgin Galactic, a spaceline company poured $300m into a new space launch system to be operated from the spaceport.

The spaceship vehicles and the passenger procedures are being designed to allow almost anyone to experience genuine space flight without the need for special expertise or to carry out exhaustive and time-consuming training.

Before space flight, the passengers complete three days of pre-flight preparation and training. This includes training inside a duplicated SpaceCraftTwo cabin installed in the WhiteKnight carrier aircraft.

"Space flights are planned to operate from the Mojave Spaceport in Southern California."

The passengers learn how to be comfortable in zero gravity and macrogravity. The spacecraft pilots and crew experience up to 4g in ascent and up to 7g in descent, but at a very much slower rate of change than in the +6g to –3g experienced by pilots in fighter aircraft manoeuvres.

The spacecraft seats are inclined so the g-forces act in the direction from the chest towards the back of the body rather than downwards from the head directly down the body as experienced by fighter aircraft pilots.

In zero gravity it is expected that some passengers may wish to remain in their seats throughout the duration of the spaceflight. Many passengers will plan to carry out physical manoeuvres and exercises in zero gravity and also spend time viewing the earth and space during the flight. The training sessions will help the passengers plan and prepare to make the best use of their time in spaceflight.

Pre-flight medical checks ensure that passengers can fly safely. Very few would be prevented from flying, for example through heart conditions or brittle bone conditions.

The spaceflights will initially take place once a week and will then progress to one and potentially two flights a day. Six pilots are deployed on each flight, two spacecraft pilots in the SpaceShipTwo with the six passengers; two pilots in the WhiteKnight 2 carrier aircraft; and two pilots in the ground-based mission control at the spaceport.

"The SpaceShipTwo test flights are expected to complete in 2009 with commercial flights beginning in 2010."

The passengers then experience macrogravity to 4G and hear the roar of the rocket motor as the spacecraft accelerates to Mach 3, nearly 2,500mph, in a few seconds. The spacecraft climbs from 50,000ft to 360,000ft in a near vertical climb in about 90 seconds.

The passengers experience the silence of space as rocket motor switches off. As the spacecraft passes through the edge of the atmosphere the passengers see the colour change of the sky from cobalt blue, to mauve, to indigo and then to black.

A ‘Welcome to Space’ announcement is made in the cabin and the passengers can unbuckle their seatbelts to fully experience zero gravity.

The passengers experience weightlessness for about five minutes. The view of the blue Earth curving into black space and the narrow band of Earth’s blue atmosphere is seen through the spacecraft window.

Shortly before the spaceship reaches its maximum altitude (apogee) at about 360,000ft, the wings are feathered or folded in preparation for re-entry into the Earth’s atmosphere.

The pilots ask the passengers to return to the seats and the sensation of weightlessness diminishes as gravity starts to return and the spaceship is drawn by gravitational pull. The spacecraft decelerates producing strong g-forces. The passengers experience the high g-force, up to 7g, in a lying position.

The feathered wings of the spacecraft produce a powerful drag against the increasing thickness of the atmosphere. At 60,000ft, the pilot announces that the spacecraft is being re-feathered and the wings are reconfigured to their original position. The g-forces diminish quickly as the spacecraft commences its homeward unpowered glide back to the spaceport. The total flight time from take-off to landing is about two and a half hours.