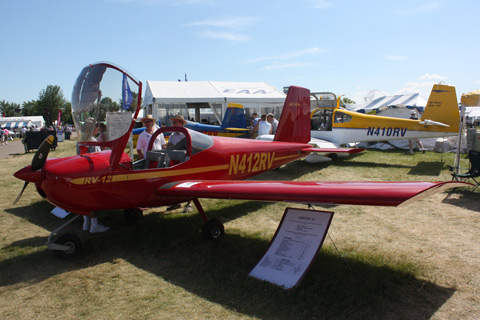 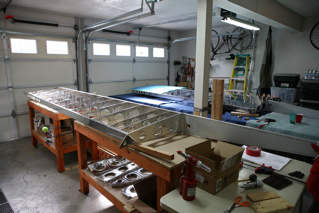 The RV-12 designed and developed by Vans Aircraft in Austria. 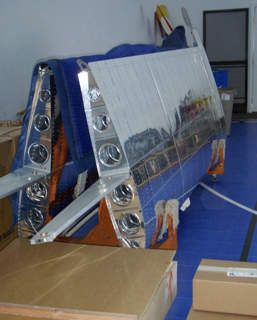 The lightweight removable wings allow the RV-12 to be parked at home or in a hangar.

The Van’s RV-12 is a single-engine, two-seat aerobatic aircraft designed and developed by Van’s Aircraft in Austria. It is the first two-seat, low-wing and home-built aircraft in the RV series constructed with blind rivets. The blind rivets allow the manufacturing of the aircraft without an assistant.

The RV-12 completed its maiden flight on 9 November 2006 and entered into service in April 2008. As of May 2010, 34 aircraft were operating worldwide. The aircraft’s kits are available in six separate sub-kits: empennage or tailcone kit, wing kit, fuselage kit, finish kit, avionics kit and powerplant kit.

The RV-12 was designed in compliance with light sport aircraft (LSA) standards and is mainly constructed with aluminium rather than composite material to reduce cost and assembly time. This unique design allows the aircraft to fly more efficiently than the RV-9A. The aircraft is fitted with full span flaperons and stabilators, which are small enough to allow the aircraft to fit on a trailer.

“The Van’s RV-12 was developed by Vans Aircraft in Austria.”

Two people can easily detach or deploy the aircraft’s wings in a few seconds by pulling a pair of pins located behind the seats.

The lightweight removable wings allow the RV-12 to be parked at home or in a hangar. An ignition interlock system prevents the start of the engine if the wings are not properly fitted.

The RV-12 is fitted with a Dynon D180 flight deck, featuring two seats for pilot and passengers.

The aircraft has a spacious and comfortable cabin in cabin forward configuration. The two seats are located in front of the main spar, not on top. The width of the cabin is 1.09m and the specially built canopy provides clear visibility to the pilot.

The cabin also acts as a baggage compartment and can hold 22kg of luggage. The RV-12 comprises an interior panel kit in various colours with matching seat cushions.

Dynon AP74 autopilot and Dynon D100 passenger side electronic flight instrumentation system are also fitted as standard. Switches and fuses incorporated in the glass panel control the entire circuitry of the RV-12. The fibre glass panels which are equipped with the cockpit avionics systems are supplied by Garmin Avionics.

A fixed tricycle-type landing gear is fitted to the aircraft, constructed with steel leaf springs. It is also equipped with three 5×5 wheels (one below the nose and two below the fuselage section) as well as hydraulic disc brakes.

The aircraft can be navigated in different directions through a steerable nosewheel.

The RV-12 is powered by a single Rotax 912ULS engine manufactured by RBP Rotax. The engine can produce 74kW of power.

Rotax 912 ULS is a four-stroke and four-cylinder air-cooled engine, which boasts electronic dual ignition, electric starter, air intake and exhaust system. It also comprises a single Sensenich composite ground adjustable propeller, which drives the engine. The propeller can rotate at a rate of 5,800rpm. The engine weighs around 56.6kg and its displacement is 82.6in³ (2m³). The engine boasts external alternator of 12V DC.

The range and service ceiling are 893km and 4,206m, respectively. Its take-off distance is 213m, while the landing distance is 160m. The aircraft weighs around 340kg and its maximum take-off weight is 600kg.