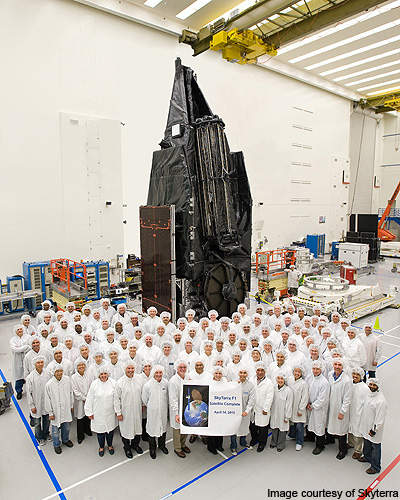 SkyTerra-1 is a telecommunication satellite that provides cellular voice and data coverage to telecom operators in remote parts of North America. 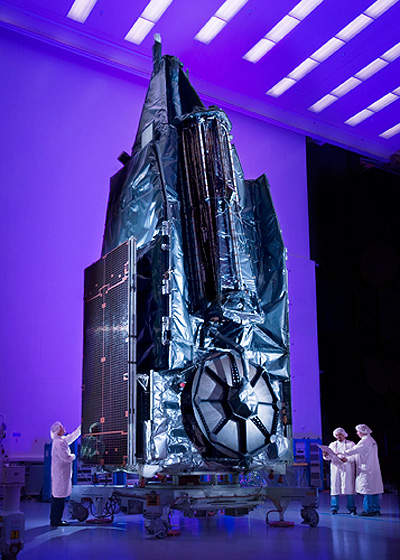 LightSquared is the operator of the satellite 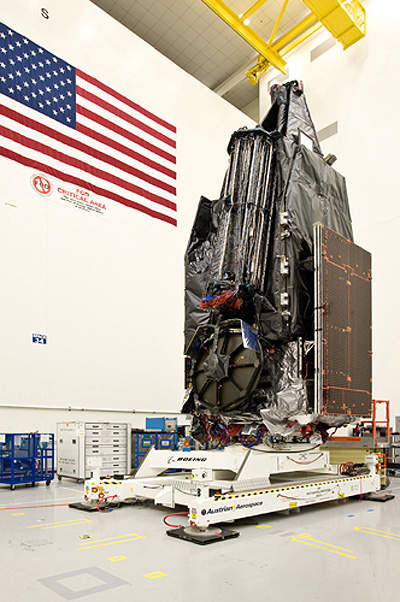 The satellite was designed and manufactured by Boeing Space and Intelligence Systems.

SkyTerra-1 is a telecommunication satellite that provides cellular voice and data coverage to telecom operators in remote parts of North America. The satellite replaced MSAT-1 and was designed and manufactured by Boeing Space and Intelligence Systems.

LightSquared, formerly known SkyTerra or Mobile Satellite Ventures (MSV), is the owner and operator of SkyTerra-1. The satellite was shipped to the Baikonur Cosmodrome in Kazakhstan in October 2010.

The satellite was launched into geostationary earth orbit on the Boeing 702HP bus platform atop a Proton-M Briz-m launch vehicle on 14 November 2010 and sent its first signal on 15 November. The commercial service of SkyTerra-1 is planned for 2011.

SkyTerra-1 is the first telecommunication satellite to use space and terrestrial elements and has been designed for a lifespan of 15 years. It weighs around 5,400kg and consumes 14kW of power. It has two five-panel solar arrays that provide 11,000W of energy using highly efficient triple-junction Gallium arsenide cells

“SkyTerra-1 is the first telecommunication satellite to use space and terrestrial elements.”

The satellite provides 4G speed and universal wireless connectivity to the US and offers potential data and voice services to mobile phone users through small ground stations.

The satellite will use GBBF equipment and ground control stations to establish LightSquared’s first Space-Based Network (SBN), which provides access to millions of subscribers throughout the US. LightSquared will accept the SBN from Boeing in early 2011.

The upgraded version SkyTerra-2 is scheduled for launch in 2011. Nokia Siemens Networks will offer terrestrial network to LightSquared.

Once operational, the satellite will be the largest commercial antenna reflector in space. The reflector decreases the need for incorporating larger antennas and battery-draining receivers in mobile handsets.

“Once operational, the satellite will be the largest commercial antenna reflector in space.”

Manufactured by Boeing Space and Intelligence Systems, the Boeing 702HP is a flight-proven satellite bus principally used for geomobile services. It is equipped with a bi-propellant propulsion system and can accommodate 5,500kg of payload. The bus was first introduced in October 1995 and is compatible with Delta IV, Atlas V, Ariane 5, Proton, and Sea Launch rocket launchers.

SkyTerra-1 was launched on the back of International Launch Service’s Proton-M Briz-M launch vehicle. The launcher successfully released the satellite into orbit nine hours after take-off from the Khrunichev Research and Production Center in Baikonur Cosmodrome, Kazakhstan.

SkyTerra-1 is controlled by four operational gateways centres at Ottawa, Saskatoon, Dallas and Napa using SBN and GBBF equipment. The ground control station was designed and manufactured by Comsat Laboratories. Communication between the satellite and ground control station takes place through the specific bandwidth allocated to the service provider.