2 solar wings, each with 4 panels of dual-junction gallium arsenide cells 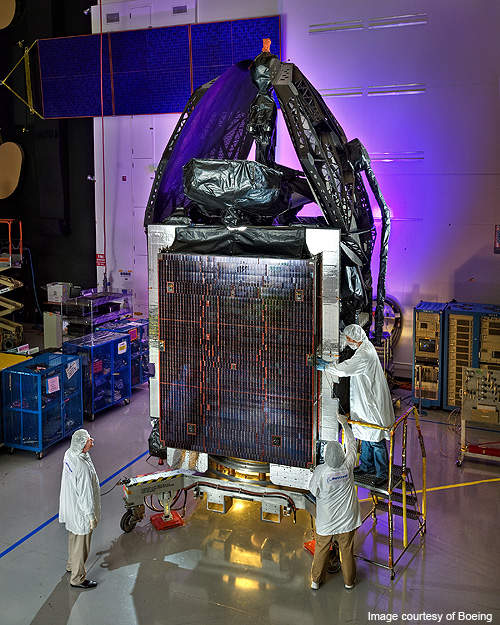 Protostar II was designed and manufactured by Boeing Space and Intelligence Systems. 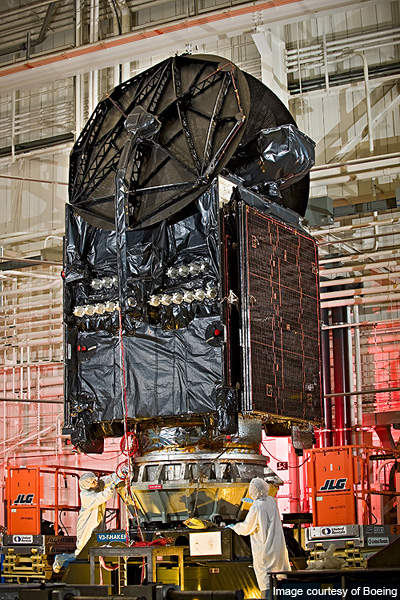 Protostar II is designed for a lifespan of 15 years. 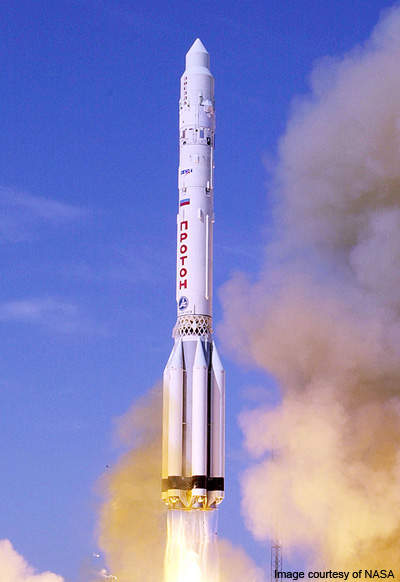 The spacecraft was designed and built by Boeing Space and Intelligence Systems (BSIS) in the name of Protostar II for Bermuda based satellite service operator ProtoStar. Protostar II was launched into geostationary orbit on 16 May 2009 at 107.70 east longitude.

Following the bankruptcy of ProtoStar in December 2009, Protostar II was acquired by SES at a cost of $185m through an auction process. The satellite was renamed as SES 7 and deployed into global fleet of SES orbit at 108.2° east longitude, just adjacent to the existing NSS-11 communication satellite.

The Protostar II was designed for a lifespan of 15 years. It weighs around 3,905kg at launch and 3,087kg in orbit. It consumes 9.9kW of power at the initial stage of operation and 8.8kW during the final stages of its design life.

“Boeing received the first on-orbit signal from the satellite on 18 May 2009.”

ProtoStar ordered the Protostar II satellite in 2007. The Boeing Satellite Development Centre unveiled its decision to design and build Boeing 601HP satellite bus for deployment in Protostar II in January 2008. Integral Systems was awarded a contract by ProtoStar in April 2008 to design, develop and supply integrated ground control station for Protostar II.

Boeing received the first on-orbit signal from the satellite on 18 May 2009 at a control station located in Hartebeesthoek, South Africa. The satellite control was handed over to ProtoStar in June 2009 upon completion of in-orbit tests.

The 601HP satellite bus is designed and developed at Boeing’s manufacturing facility in El Segundo, California. It is a flight proven spacecraft bus used for geostationary communications. It is equipped with xenon ion propulsion system (XIPS) for all on-orbit manoeuvring.

“Following the bankruptcy of ProtoStar in December 2009, Protostar II was acquired by SES.”

The HP version can accommodate payloads double than the original Boeing 601 model. It can carry around 60 transponders and offers electrical power up to 11kW.

The Protostar II was carried atop ILS Proton-Briz M launch vehicle which is powered by bipropellant on-orbit system. The designation of the vehicle was derived from the ‘Proton’ rocket and ‘Briz M’ booster stage built by Khrunichev State Research and Production Space Center, Russia.

The vehicle successfully released the spacecraft into geostationary orbit after 9 hours 57 minutes of take-off. It was launched by the ILS.

The GCS was designed and manufactured by BSIS. The primary control station is deployed at Indonesia and controlled by Indovision. The station is equipped with automated programmed hardware and software supplied by Integral Systems. The satellite can be tracked, operated and monitored using telemetry tracking and command (TT&C) system.