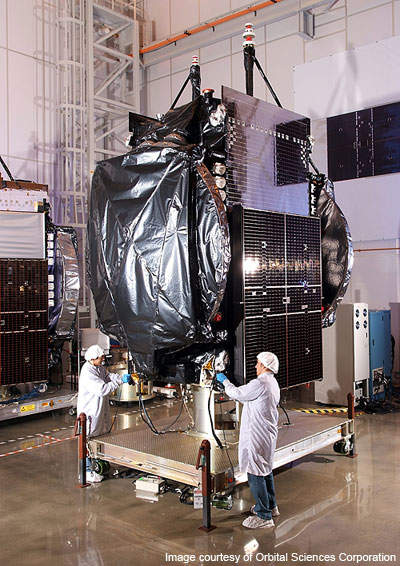 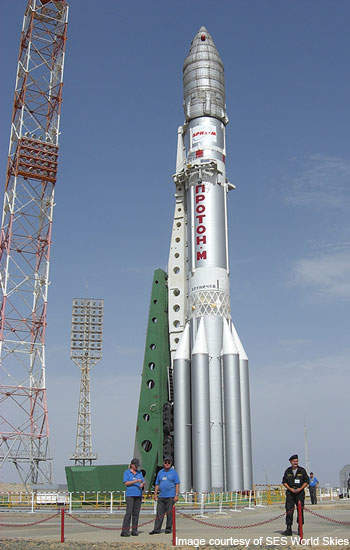 The SES-3 was launched into geosynchronous transfer orbit (GTO) from the Star 2.4 bus platform in July 2011. 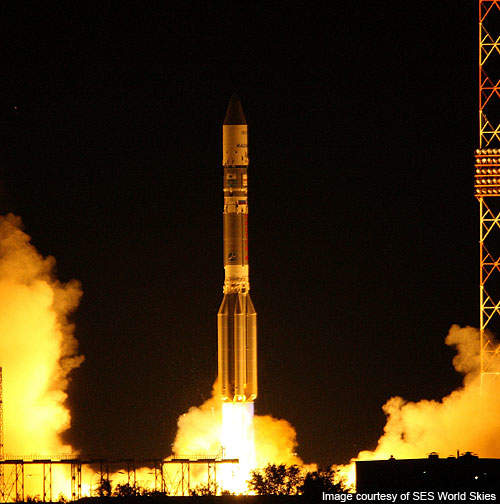 It was co-launched with the KazSat-2 atop the Proton M Briz M vehicle along from Baikonur Cosmodrome site 200/39, Kazakhstan.

The spacecraft was positioned at 103° West longitude and supplanted the existing AMC-1 satellite. It is the first of two spacecraft developed as part of the SES fleet. The AMC Ground Spare was redesignated as SES-3 in early 2010.

The SES-3 was launched into geosynchronous transfer orbit (GTO) from the Star 2.4 bus platform in July 2011. It was co-launched with the KazSat-2 atop the Proton M Briz M vehicle along from Baikonur Cosmodrome site 200/39, Kazakhstan.

The Antonov An-124 cargo aircraft delivered the SES-3 to the Baikonur Cosmodrome in Kazakhstan on 9 July 2011.

“It is the first of two spacecraft developed as part of the SES fleet.”

The SES-3 was designed, manufactured and tested by US-based satellite manufacturer Orbital Science Corporation at its manufacturing facility in Dulles, Virginia. SES World Skies is the operator of the spacecraft.

The satellite was designed for a lifespan of 15 years. It weighs around 3,112kg at launch and consumes 5kW of payload power.

The SES-3 is an all digital guided transponder satellite which renders communication capacity, connectivity and flexibility. The 24 C-band and 24 Ku-band transponders of 36MHz capacity incorporated in the spacecraft render complete in-orbit services to its operator.

Six channels in each band are cross strapped to the opposite band for optimising their endeavour networks.

The C-band offers services to top US television networks by broadcasting to approximately 4,350 receiver stations in the US. The Ku-band renders VSAT and broadband services to the government, media and enterprise customers.

The Star 2.4 is the largest spacecraft bus designed and built by Orbital Science Corporation for geostationary communications. It is incorporated with two lithium-ion batteries of 4,840 watts capacity.

Other auxiliary payloads installed in the bus include earth viewing instruments, attitude and orbit control system with star trackers as well as thermal radiators fitted on the nadir facing deck.

The spacecraft bus is made of composite materials or aluminium face sheets. The nominal bus voltage varies between 24V DC and 36V DC.

“The SES-3 is an all digital guided transponder satellite.”

The name of the launch vehicle is derived from the Proton rocket and Breeze M booster stage built by Khrunichev State Research and Production Space Centre, Russia.

The rocket launcher successfully released the spacecraft into GTO eight hours and one minute after take-off from the Khrunichev Research and Production Centre in Baikonur Cosmodrome.

The KazSat-2 used to serve the Republic of Kazakhstan was also paired and launched into orbit upon completion of nine hours 24 minutes from take-off.

Five operational centres in Canada, Mexico, the USA and the Caribbean control the SES-3 using ground equipment hardware and software. The ground station was designed and developed by the Orbital Science Corporation and deployed at the customer’s site.

The telemetry tracking and command (TT&C) system installed at the ground station tracks, controls and monitors the spacecraft when deviating from the orbit.