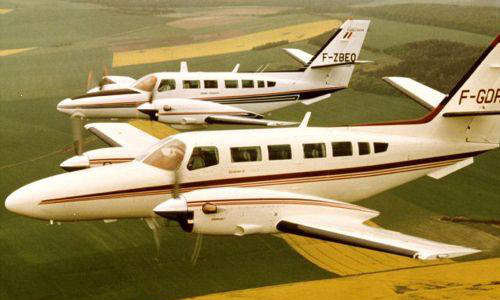 The F406 is available as a 14-seat passenger transport, a six-seater for executive / VIP use or a small cargo transport, with a nominal maximum payload of just over 2,200kg. 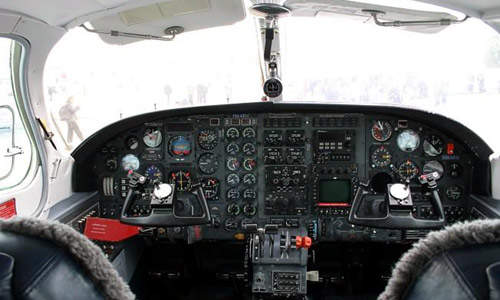 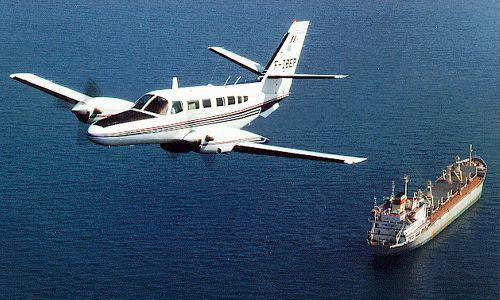 Surmar / Polmar customers include the Australian and Greek coastguards, Scottish Fisheries and British, French and US customs.

The Reims F406 Caravan II is a non-pressurised twin-turboprop aircraft designed and built by Reims Aviation in cooperation with Cessna. It is a development of the Cessna 404 Titan, and similar to the pressurised Cessna 441 Conquest II. About 83 aircraft are currently operating worldwide. The maiden flight of the aircraft took place in September 1983 and the initial production aircraft flew first in April 1985.

Described by Reims Aviation as a “workhorse”, the F406 is available as a 14-seat passenger transport, a six-seater for executive / VIP use or a small cargo transport, with a nominal maximum payload of just over 2,200kg; for extra capacity a 1.3m³ cargo pod can be fitted to the belly of the aircraft, which can carry up to 320kg of general freight or passenger bags.

More than half of the 120 or so aircraft sold worldwide, however, are used for missions such as maritime surveillance, as the Surmar variant, pollution monitoring, as the Polmar variant, search and rescue missions, cartography / geosurvey and target towing. Basic features of the F406 such as 360° visibility, low empty weight, a wide range of operational speeds and good door access for air-drops are said to make it particularly suitable for such missions, and more than 150 EASA and FAA-certified mission kits are available, as well as an air-conditioning system with 20,000 BTU capacity.

Surmar / Polmar customers include the Australian and Greek coastguards, Scottish Fisheries and British, French and US customs. Depending on the mission, the crew can vary between one or two pilots, an operator and/or an observer.

“The Reims F406 Caravan II is a non-pressurised twin-turboprop aircraft.”

The aircraft is fitted with a Caledonian Aviation Systems mission management system, which provides a 20-track memory for its radar. Typical Surmar sensors are a Bendix (now Telephonics) RDR-1500 radar, a camera coupled to the radar, a gyro-stabilised FLIR turret and a Thales communications intelligence and electronic (COMINT) system. The Polmar has a side-looking airborne radar (SLAR) to detect oil slicks and an IR/UV line scanner to map a polluted area.

The F406 is a cantilever low-wing monoplane of conventional aluminium and steel construction, with retractable tricycle-type landing gear and cruciform tail section. It uses essentially the same fuselage as the Cessna 404 Titan, the wings and nose from the Cessna Conquest I – although with redesigned nacelles to accommodate the Pratt & Whitney engines – and the empennage (except for the tail) from the Conquest II.

The landing gear is designed for use at unimproved airports, and features the trailing-link concept used on the Conquest I and II.

The F406 Caravan II features a spacious and comfortable cabin with more leg space for passengers. About 12 passengers can be accommodated in its cabin. The executive version of the F406 accommodates one or two pilots and six to seven passengers. The cabin is 5.71m long. The width and height of the cabin are 1.42m and 1.31m respectively.

In terms of performance, this translates to a maximum cruise speed of 246kt (283mph)at 15,000ft, a certified ceiling of 30,000ft and a range of 1,200nm (1,380 miles). Also, climb rate is put at 1,850ft a minute, and with a maximum fuel capacity of just over 1,800l, the aircraft has an endurance of more than six hours (with 45-minute reserves), although this can be extended if necessary by another hour by fitting extra fuel tanks in the engine nacelles.

“More than half of the F406s in service are used for missions such as maritime surveillance.”

Although having two engines makes it more expensive to operate than similar aircraft such as the single-engine Cessna 208 Caravan, it does enable the F406 to comply with European regulations regarding commercial operations, which allow only multi-engine aircraft for commercial instrument flight. Consequently, it is certified to FAR 23 and SFAR 41 for single-pilot day and night operations, as well as VFR, IFR and flight into known icing conditions.

The F406’s standard avionics system is the Honeywell Silver Crown package, which includes two communication and navigation systems, glideslope and ADF. Gold Crown avionics are optional, as are a Honeywell autopilot and the Honeywell RDR 2000 weather radar.

In addition, Reims Aviation says that since 2004 the 10,000 primary parts that make up the aircraft have been digitised under Dassault’s System Catia V5 software to allow design modifications requested by customers to be carried out more quickly and at lower cost than before.