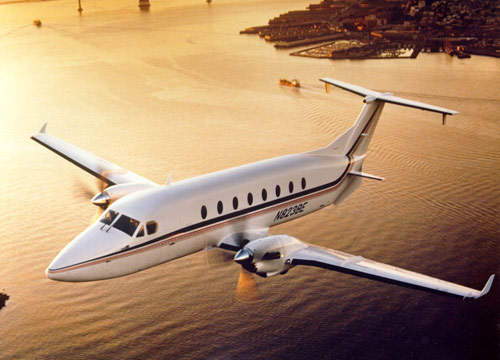 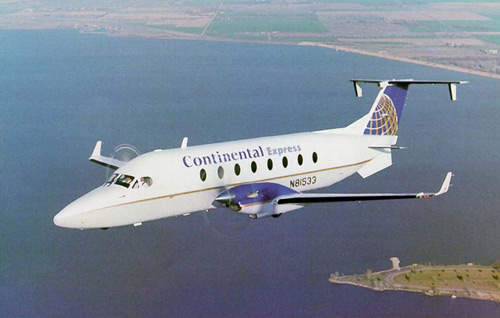 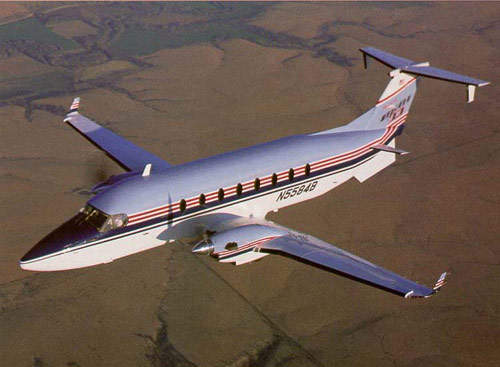 The 1900D can be configured as a commuter aircraft for up to 19 passengers, with a combination of passenger/cargo, or as a corporate shuttle or VIP aircraft.

The Beech King 1900 flying over the Golden Gate Bridge. 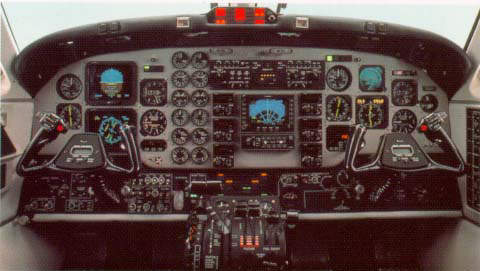 The aircraft on the runway. 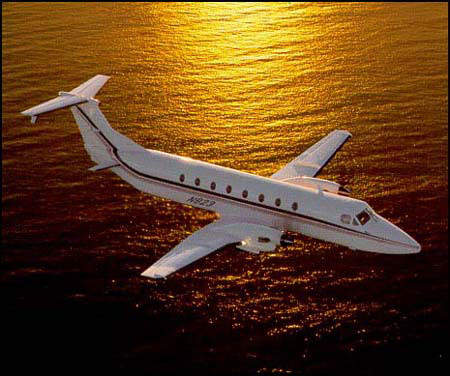 Seven aircraft are in service with the US Air Force Chemical and Biological Defence Command.

The Hawker Beechcraft Beech King 1900D is a twin turboprop regional airliner. The aircraft was developed from the Beech 1900 which first flew in 1982 and entered service in 1984. Over 400 of the current 1900D version are in service with regional airlines, special mission operators and corporations. 250 of the earlier versions of the 1900 series were delivered between 1984 and 1991, when the 1900D entered production.

Beech Aircraft Corporation, who began the project, became a wholly owned subsidiary of Raytheon in 1980.

Raytheon Aircraft, a subsidiary of Raytheon Company continued to incorporate improvements and additions to the aircraft. 59 aircraft were delivered in 2003.

The 1900D can be fitted as a commuter aircraft for up to 19 passengers or with a combination of passenger and cargo loads. The 1900D Executive aircraft version can be fitted for ten to 18 passengers in a corporate shuttle aircraft configuration, or with a VIP executive interior layout with a refreshment bar.

The United States Army has six 1900C aircraft in service and a 1900D version for operation in the United States Air Force Chemical and Biological Defence Command, based at the Aberdeen proving ground.

A Beech 1900C aircraft is used as a testbed by the Australian Defence Science and Technology Organisation (DSTO). In September 2003, it flew fitted with an ISR (Intelligence, Surveillance, Reconnaissance) system including advanced radars and infrared sensors.

The flight deck seats two pilots (FAR Part 135) and is fitted with dual controls, although it can be flown by a single pilot (FAR Part 91). The instrument systems include a Rockwell Collins electronic flight information system EFIS-84 with three tube multifunction displays. The cathode ray tubes display data from the Electronic Attitude Director Indicator (EADI) and the Electronic Horizontal Situation Indicator (EHSI).

“The Hawker Beechcraft Beech King 1900D airliner can be fitted as a commuter aircraft for up to 19 passengers.”

The aircraft has dual flight directors, a Ground Proximity Warning System (GPWS), a terrain collision avoidance system TCAS I, an optional global positioning system and colour digital weather radar. In January 2004, Raytheon announced that it was offering the T2CAS system as a retrofit for the 1900C/D.

T2CAS is an integrated TCAS II and a terrain awareness avoidance system (TAWS), which is made by ACSS, an L-3 Communications and Thales company.

The air-conditioned cabin is fitted with 19 single-class seats in a single-aisle layout. The 1900D provides passengers with a stand-up cabin and airline-style seating, including recline, armrests, tray tables and underseat storage. The forward door on the port side is equipped with airstrips for operation at airports with limited facilities.

An UltraQuiet active noise control system, developed by Ultra Electronics, Noise and Vibration Systems Division of the UK, to reduce the in-flight noise in the passenger cabin is optional. The active UltraQuiet system acoustically cancels propeller noise in the cabin by introducing sound waves that are of equal frequency and amplitude but are of opposite phase to the unwanted noise. The installation also includes passive materials designed by Elliot Aviation of Moline, Illinois.

The Beech 1900D is powered by two Pratt & Whitney PT6A-67D turboprop engines, each rated at 954kW, which provide a maximum cruise speed of 283kt (316mph) and maximum altitude of 25,000ft. The Hartzell propellers are four-bladed, composite, constant speed and full feathering reversible-pitch propellers.

The aircraft’s fuel tanks provide a usable fuel capacity of 2,519l. A refuelling point is located on the leading edge of each wing.