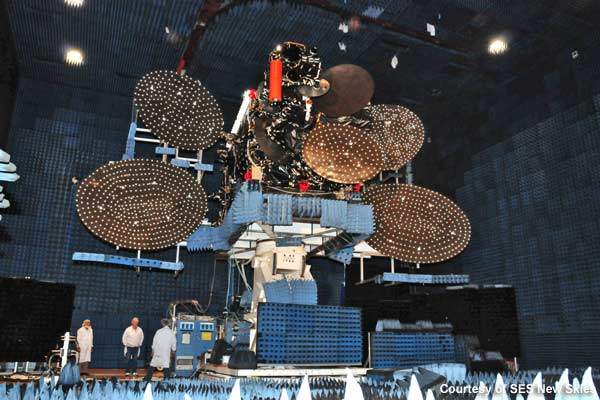 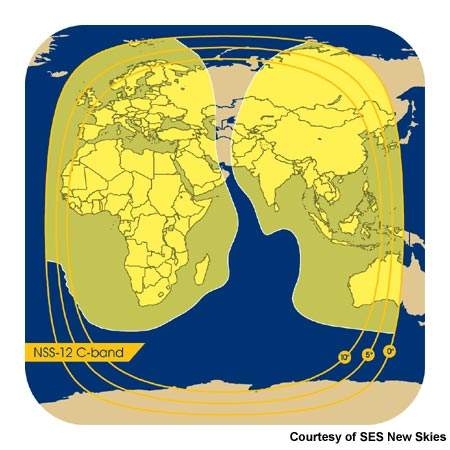 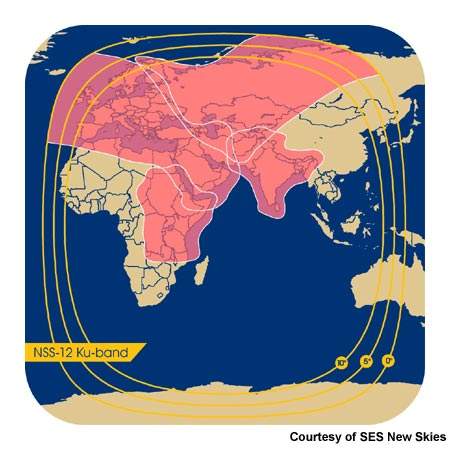 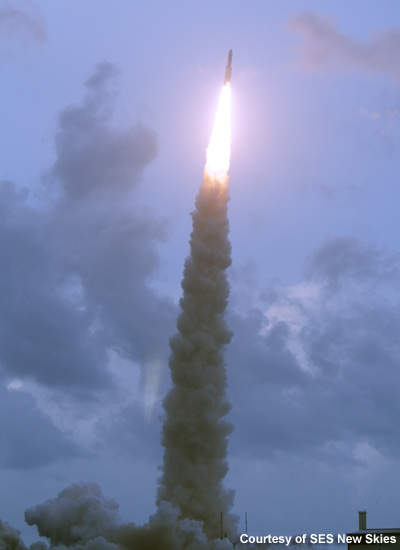 The satellite was launched into geosynchronous transfer orbit (GTO) through the SS/L-FS-1300 platform on the back of an Ariane 5 launch vehicle on 29 October 2009. 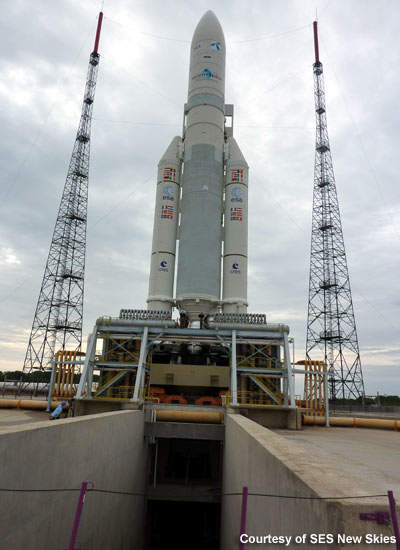 NSS-12 is a broadcasting satellite principally used for providing high-power direct-to-home (DTH) and digital broadcasting services to telecommunication providers, broadcasters, corporations and governments in Europe, the Middle East, Asia, Australia and Africa. The satellite is part of the NSS series (New Skies Satellite). It is located at 57°E longitude over the Indian Ocean region, and has replaced its predecessor, the NSS-703 satellite.

The NSS-12 was shipped to Kourou in French Guiana in September 2009.

The satellite was launched into geosynchronous transfer orbit (GTO) through the SS/L-FS-1300 platform on the back of an Ariane 5 launch vehicle on 29 October 2009. It was launched at the same time as the Thor 6 satellite and entered into commercial service on 18 January 2010.

The NSS-12 is the first satellite developed by SS/L for SES New Skies. The satellite has been designed for a lifespan of 15 years. It weighed around 5,620kg at launch and consumes 15.8kW of power. The satellite is designed to have two unfolded solar panels with wingspan of 32.3m to provide the required energy.

The C-band and Ku-band transponders equipped in the satellite provides broadcasting services to almost two thirds of the estimated world’s population.

The NSS-12 is the second broadband satellite in the SES New Skies fleet prior to the launch of NSS-703. All the traffic of NSS-703 was transferred to NSS-12. The polarisations of C-band and Ku-band are circular and linear respectively.

The satellite’s bandwidth capacity has increased since its operations began in January 2010. It provides SES customers with additional capacity when NSS-703 reaches its full bandwidth consumption.

NSS-12 is a digitally channelised transponded satellite that provides communication capacity, connectivity and flexibility. 40 C-band and 48 Ku-band active high-power transponders installed in the satellite are connected to four gateway beams in the Middle East and Europe, Central and South Asia and East Africa areas.

The satellite has highly efficient fixed and steerable beams, principally suited for DTH applications. The C band provides telephony, cable distribution and corporate network services to Europe, Africa, the Middle East, Asia, and Australia, while the active Ku-band services enable the existing and future customers to innovate new services and repeat the success of various DTH and IP platforms on NSS-703.

Manufactured by Space Systems / Loral, the FS 1300 is a fully redundant, flight proven satellite bus principally used for geostationary communications. It is equipped with a bipropellant propulsion system and can accommodate 5,500kg of payload. The satellite bus offers total satellite power ranging from 5kW to 25kW. The FS 1300 satellite buses are designed for a lifespan of ten to 15 years and will retire after 17 years of successful service.

“The NSS-12 was shipped to Kourou in French Guiana in September 2009.”

The satellite bus was first introduced in 1980. It can accommodate as many as 12 to 150 active transponders. The FS-1300 has a low weight and a strong structure equipped with fuel-efficient attitude and station-keeping subsystems, reliable solar arrays and batteries, and state-of-the-art command and control subsystems.

The NSS-12 was launched atop an Ariane 5 vehicle from the Guiana Space Centre, Europe’s spaceport in French Guiana. Ariane 5 is manufactured by ArianeSpace, France.

The NSS-12 can be controlled by five operational centres in Europe, Africa, the Middle East, Asia, and Australia using ground equipment hardware and software. A global satellite configuration and control element (GSCCE) is used to control and track the satellite using telemetry tracking and command (TT&C) links system.

The ground control station is manufactured by SS/L and installed at international customer sites. The TT&C technology is primarily used to track and control the satellite when deviating from its orbit. Communication between the satellite and ground station takes place through the bandwidth allocated to the service provider.