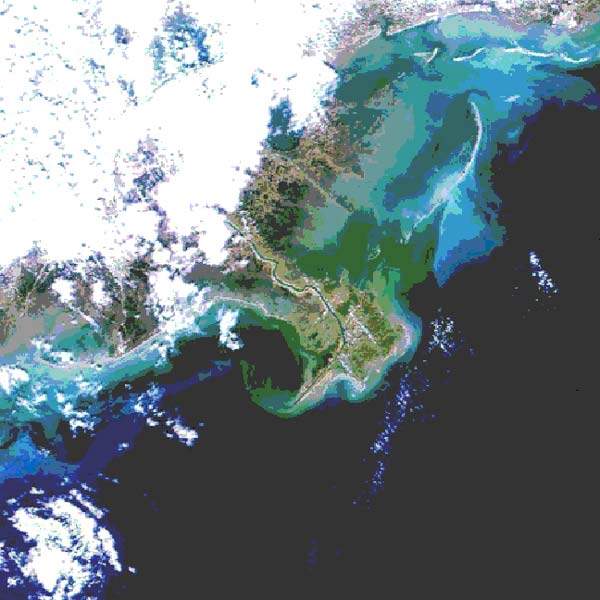 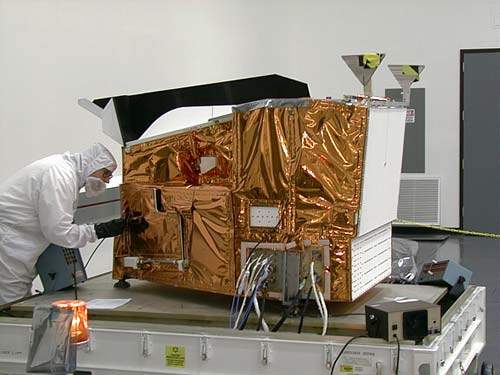 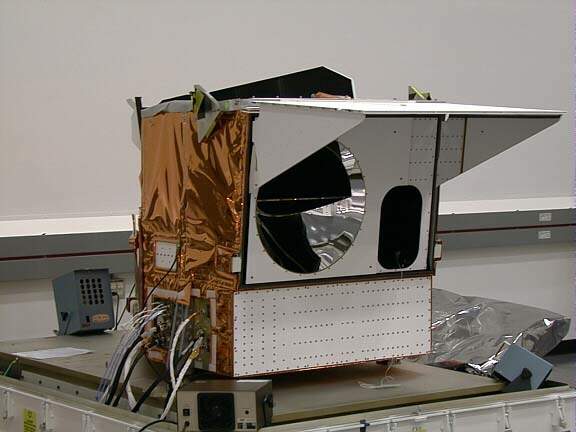 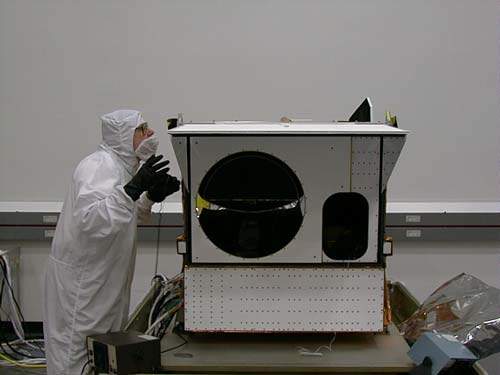 The Apex ground station achieved operational status on 14 July 2000. Currently working in a demonstration mode, the ground station is being used to display to potential clients the systems that will be fully available after the launch of the second satellite Aqua in 2001.

It is designed with economy as a priority, to allow easy, cheap access to the scientific information gathered by the satellites. The information is broadcast free and nearly continuously from the satellites and is available to all ground stations and to spacecraft via a MODIS instrument.

Data applications include measuring land and ocean surface temperature, detecting fires and monitoring ocean colour for phytoplankton and sediment. It can also produce global vegetation maps and data to be used in change-detection measurements.

The MODIS instrument takes data by scanning from side to side as it passes over the earth. The instrument points straight down, and ‘sees’ up to 55° to either side. Because of this, the image is most accurate down the centreline of the image, and becomes more distorted (compressed) towards either side. This is a combination of the angle MODIS is viewing the ground at and the curvature of the Earth. The images are built from MODIS bands 1 (red), 4 (green) and 3 (blue). The small image has a resolution of 3km per pixel at nadir.

One of the unique features of the MODIS instrument is its Direct Broadcast capability. The norm is for spacecraft to collect data and then store it on board until it passes over a ground station set up to receive the data, at which point it transmits the data in one large batch. This avoids losing data taken when the spacecraft is out of sight of any ground stations, such as when it is over the ocean.

MODIS does store data on board for later download, but it also broadcasts the raw data it collects immediately, on the chance that someone on the ground below is listening. This is called Direct Broadcast of the data. NASA has the antennas and other equipment necessary to receive and process MODIS Direct Broadcast data whenever the spacecraft is above the horizon. The Overpass predictor can be used to determine when there will be a Terra spacecraft overpass of NASA/GSFC (Greenbelt, MD) or any other location that may have a MODIS Direct Broadcast receiving station.

MODIS data can be transmitted directly from the Terra spacecraft to the Apex ground station equipped with an average 3m or larger X-band receiving system and appropriate hardware and software. This real-time data stream carries the data from all 36 spectral bands for the entire MODIS field of view (2,300km) whenever MODIS can be seen from the ground station. The MODIS direct broadcast system was first broadcast on Monday, April 24, 2000. Current plans call for the direct broadcast to be on constantly except when it is passing over one of NASA’s Deep Space Network antennas when they are actively tracking a remote spacecraft. This occurs for less than two hours a day.

Vexcel corporation is hoping to attract interest in the ground stations from a variety of groups, such as universities, scientific research centres, commercial organisations and national centres for remote sensing. It has emphasised its low cost and high-speed continuous download as positive selling points.