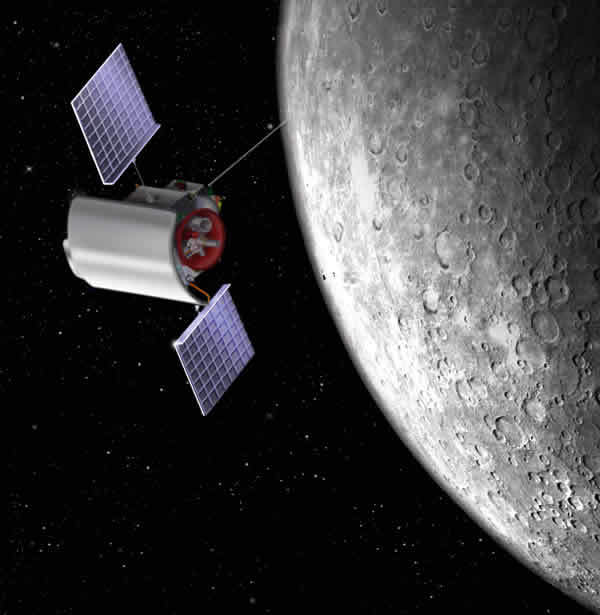 Messenger will conduct the first orbital study of the planet Mercury. 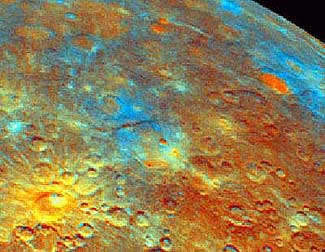 Variations in the colours of rocks lying in different craters, shown here in enhanced Mariner 10 images, suggest variations in composition. This is one of the things that the Messenger Mission will study. 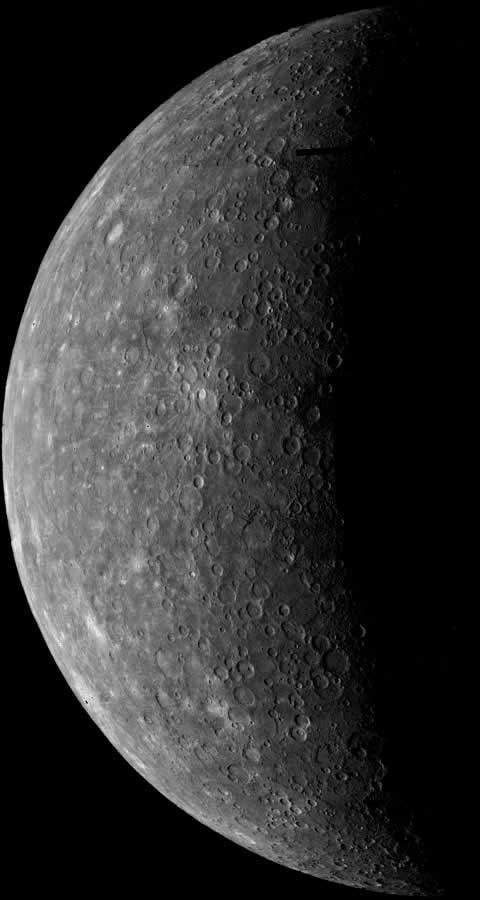 Mercury has not been visited since the Mariner 10 collected this image in the early 1970s.

Messenger (an abbreviation of Mercury Surface, Space Environment, Geochemistry and Ranging) will be only the second ever mission to explore the planet Mercury. It will use initial flybys as a guide to perform a focused scientific investigation of the planet starting in April 2009 when it will orbit the planet making comprehensive measurements for one earth year. The instruments onboard the Messenger spacecraft include: Mercury dual imaging system (MDIS); gamma ray and neutron spectrometer (GRNS); the magnetometer; the Mercury laser altimeter (MLA); the atmospheric and surface composition spectrometer (ASCS); the energetic particle and plasma spectrometer (EPPS); and the X-Ray Spectrometer (XRS).

Benefits of the mission include technological applications for robotics, medicine, oil exploration, industrial laboratory instrumentation and aircraft communications. A financial benefit will also go to disadvantaged small businesses in six areas that have been targeted.

To make economical use of mass, Messenger’s propulsion system is integrated into the spacecraft structure. The instruments are located on a science deck facing Mercury, while the spacecraft is shielded from the sun’s intense heat by a lightweight thermal shade. Most of the instruments are fixed-mounted, so coverage of Mercury is obtained by spacecraft motion over the planet. The imaging system uses a miniature scan mirror so it can quickly collect image mosaics.

The instruments on Messenger have been carefully selected to address the six questions it intends to answer. The Mercury dual imaging system (MDIS) is a narrow-angle imager and wide-angle multi-spectral imager that will map landforms, surface spectral variations and topographic relief from stereo imaging.

The gamma ray and neutron spectrometer (GRNS) works in two modes. The gamma ray mode measures emissions from radioactive elements and gamma ray fluorescence stimulated by cosmic rays. It will map elemental abundances in the materials that make up Mercury’s crust. The neutron mode provides sensitivity to hydrogen in ices at Mercury’s poles.

The magnetometer will map the detailed structure and dynamics of Mercury’s magnetic field and search for regions of magnetized rocks in the planet’s crust.

The Mercury laser altimeter (MLA) will produce highly accurate measurements of topography and will measure Mercury’s slight wobble caused by the planet’s libration. It measures the round-trip time of a laser burst reflected off Mercury’s surface, giving a distance measurement.

The energetic particle and plasma spectrometer (EPPS) will measure the composition, spatial distribution, energy and time-variability of charged particles within and surrounding Mercury’s magnetosphere.

The X-Ray Spectrometer (XRS) is designed to measure the fluorescence in low-energy X-rays that is stimulated by solar gamma rays and high-energy X-rays and will be used to map elemental abundances in the crust.

Messenger will use gravity assists from Venus and Mercury to increase its momentum by hundreds of metres per second. Launch is scheduled for March 10th 2004 and the first Venus flyby will be in June that year, passing on the planet’s night side. It will journey round the sun three times before its second Venus flyby in March 2006.

The first close looks at Mercury in 30 years will come with Messenger’s first Mercury flyby in July 2007. This will be followed by a second in April 2008. Both flybys will approach Mercury near the terminator (the day-night boundary) and leave with sunlit views of the planet. This will give an opportunity to take pictures of the half unseen by Mariner 10, the only other mission to have visited the planet.

The returned data and photos are central to the planning of observation strategies for Messenger’s yearlong orbit mission, beginning in April 2009.