Height to Top of Fins 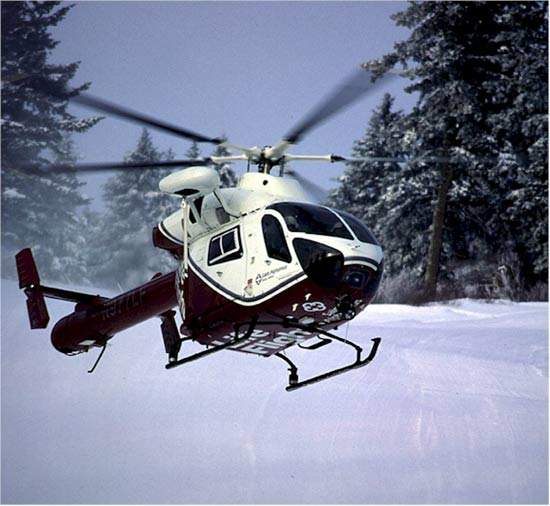 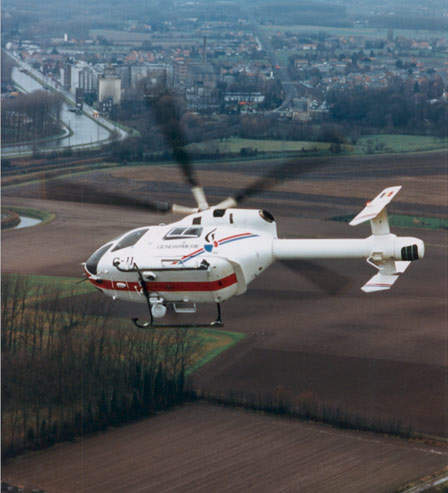 Instead of a tail rotor, the MD Explorer is equipped with the NOTAR anti-torque system. 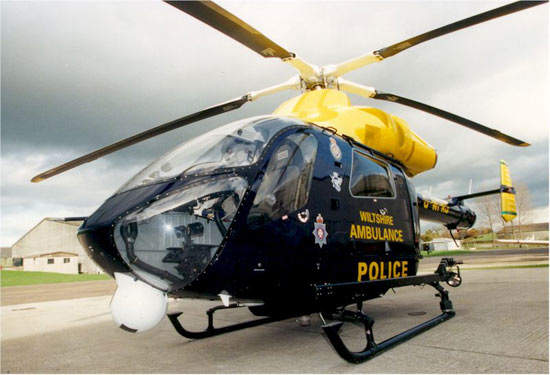 The MD Explorer is in service with law enforcement agencies and emergency services around the world. Shown here with the Wiltshire Air Ambulance Service of the UK. 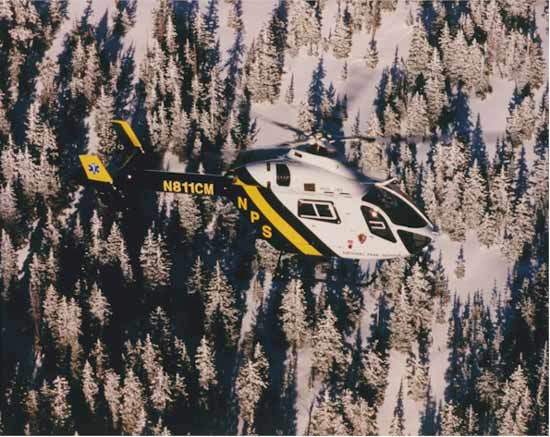 MD Explorers are used by the National Parks Service of the USA. 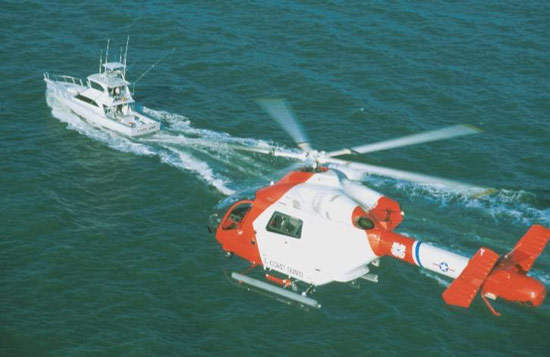 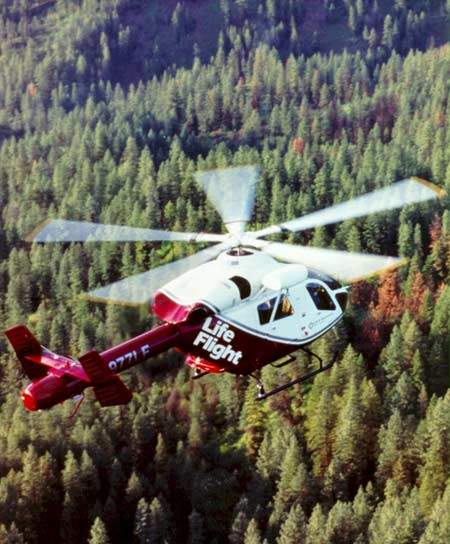 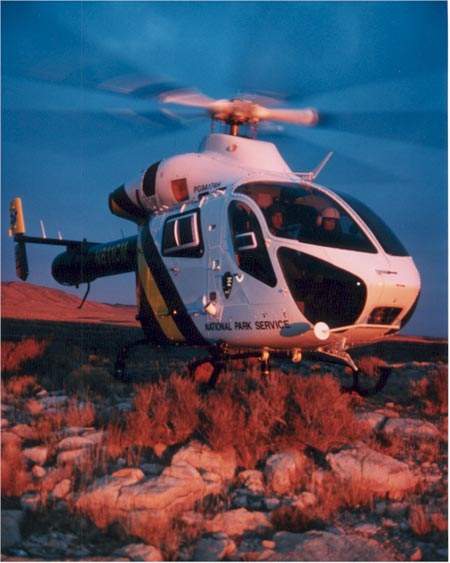 The Explorer has received both FAA and JAA certification for single-pilot, Category A IFR operations. 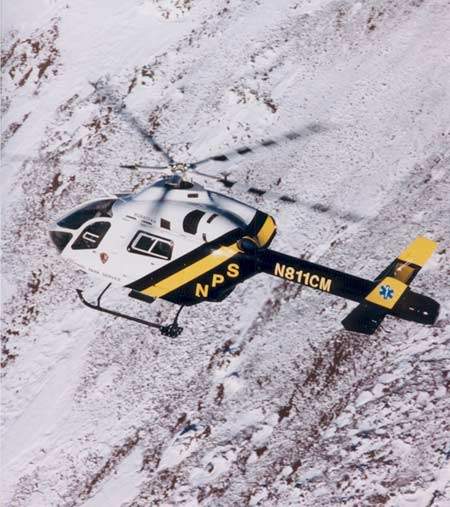 The MD Explorer twin-engined light helicopter entered service in 1994 and is in service with private and corporate customers, law enforcement agencies and emergency services around the world.

It is manufactured by MD Helicopters Inc of Mesa, Arizona, a subsidiary of the Netherlands-based MD Helicopters of the RDM Group. The company acquired the business rights of the former McDonnell Douglas Helicopters from Boeing in February 1999, excluding that of the AH-64 Apache helicopter which remains within Boeing’s business interest. As well as the Explorer, MD Helicopters’ products include the MD 500, 520N, 530F and the 600N.

Over 100 MD Explorers have been delivered. The Explorer is in service with law enforcement agencies, including the US Coastguard, US Drug Enforcement Agency, Rijkswacht and the Gendarmerie in Belgium, German State Police, Dutch National Police, the Mexican Navy and UK Police Aviation Services.

The helicopter can be fitted with a selection of federal or military systems, e.g. Forward-Looking Infrared (FLIR) observation system.

The MD Combat Explorer can be armed with 70mm rocket pod, GAU-19/A 0.50-calibre Gatling gun, M-134 7.62mm miniguns, Hellfire laser-guided missiles and Rafael N-TD dual-operation missiles. For the US Coastguard, the helicopter carries the designation MH-90 Enforcer and is armed with an M240 7.62mm gun pintle mounted at the side door.

The cabin can accommodate long loads and is capable of carrying stretcher patients and accompanying medical attendants. The cabin can be fitted with medical equipment such as resuscitation units and life support systems to the operator’s specifications and to conform to the maximum internal payload of 1,292kg.

The helicopter consists of a composite shell and two deep composite keel beams. Above the beams is an aluminium A-frame which encloses the cabin compartment and to which the cockpit is attached. Within the composite outer shell, a fine aluminium mesh is embedded which gives protection against lightning strike.

“Over 100 MD Explorers have been delivered.”

The helicopter has a five-bladed rotor, supplied by Kaman Aerospace in Bloomfield, Connecticut, 10.31m in diameter and with a maximum speed of 392rpm. Vibration reduction is achieved through a tuned fixed rotor mast and mounting truss.

Instead of a tail rotor, the MD Explorer is equipped with a NOTAR system designed by Boeing and manufactured under licence by MD Helicopters. The NOTAR no tail rotor system provides the necessary anti-torque and steering control and also eliminates the danger of accidents resulting from tail rotor strikes.

The NOTAR system uses the rotor downwash over the tailboom. This current of air is deflected to the port side by an airflow from the variable pitch fan in the root of the tailboom. The fan feeds low-pressure air to two Coand-type slots, which run the length of the tailboom on the starboard side and also to variable aperture louvers in the tail.

The helicopter is built for single or two pilot operations with Instrument Flight Rule (IFR) capability. The pilot’s and co-pilot’s seats are energy absorbing adjustable crew seats. The hinged doors at either side of the cockpit are jettisonable.

The helicopter has on-board health monitoring and exceedance recording. An RS232 port in the instrument panel provides a modem interface for a personal computer. The instruments include an EFIS 40 electronic flight and information system, airspeed and vertical speed and turn and slip indicators. The helicopter is fitted with a Honeywell RDR 2000 colour weather radar.

The passenger section of the cabin has six club style seats and a sliding door on each side. The baggage compartment is at the rear of the cabin.

“Instead of a tail rotor, the MD Explorer is equipped with a NOTAR system.”

The never exceed speed at SL, ISA conditions is 259km/h, reducing to a maximum sea level cruise speed in hot conditions (100°F) to 248km/h. The helicopter has a range of 476km and endurance of two hours 54 minutes at sea level.

The helicopter can carry a maximum slung weight of 1,361kg (3,000lb). The pilot’s station on the left has an optional display system for long-line hook operations.

The helicopter’s fixed 2.24m skids are fitted with replaceable abrasion pads. Emergency floats can be installed for over-the-water operations.