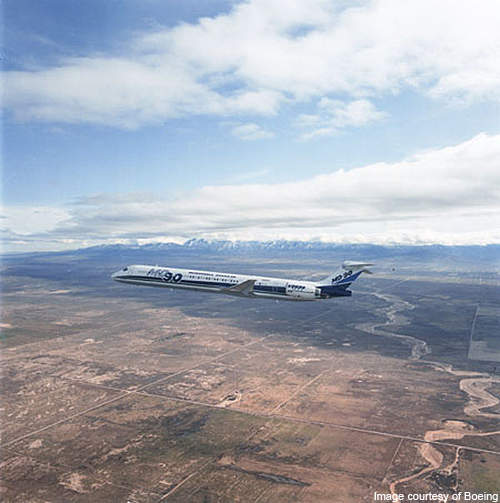 The MD-90 flying over California during the flight test in 1993. 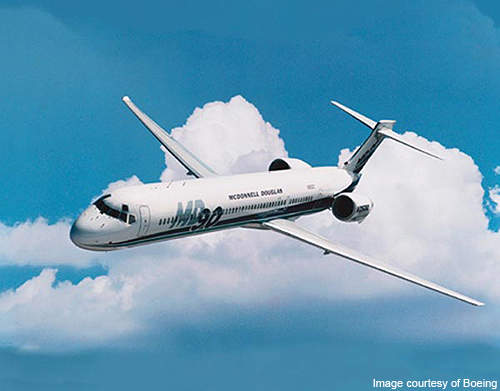 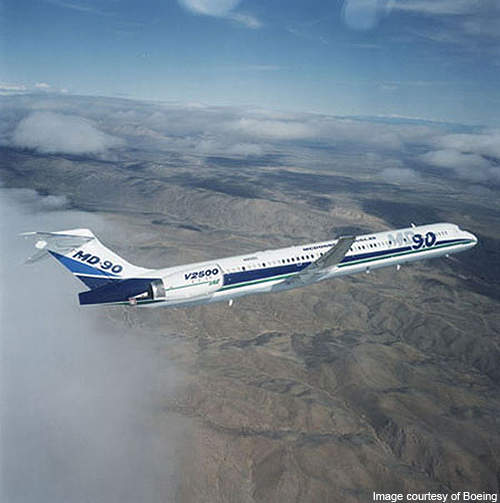 The McDonnell Douglas MD-90 is a dual engine, medium-range commercial aircraft. A single aisle aircraft, the MD-90 was developed from the MD-80 series which in turn was based on DC-9 aircraft. The first flight of MD-90 was completed in February 1993 and the aircraft entered into service in 1995. The jet achieved its FAA certification in 1994.

Boeing and McDonnell Douglas merged in 1997. The production of MD-90 took place adjacent to the Long Beach Airport of California, while two aircraft MD-90-30 Trunkliner’s were built at Jiangwan Airfield in Shanghai, China. The production was phased out in 2000 after delivery of the last aircraft to Saudi Arabian airlines.

The MD-90-30IGW variant is an added Gross Weight version with only one built.

The MD-90-30T "Trunkliner" variant was assembled by Shanghai Aviation Industrial Corporation in China.

Production was initially planned for 40 of these but was later cut down to 20, and only two built in the end.

This variant can accommodate heavy aircraft on unsuitable runways with a dual tandem landing gear featuring more tires to spread the weight of the aircraft but ultimately this feature was not used in the two Trunkliners produced.

A total of 116 aircraft were ordered and delivered from the aircraft’s maiden flight through to 2000. The first delivery was to Delta airlines in February 1995. The last delivery was in October 2000 to Saudi Arabian Airlines.

The launch customer was Delta which had 31 on firm order, while other major customers included Saudi Arabian Airlines and Japan Air Systems.

The Shanghai Aviation Industrial Group of China (SAIC) was the main Chinese contractor for the MD-90 co-production program with MDC and with Boeing after the merger. Chinese participation in the programme involved three Chinese companies producing sub-assemblies.

The MD-90 holds five interior space arrangements. It offers a higher degree of comfort and low interior noise levels to passengers. The aircraft can accommodate 153 to 172 passengers in its large cabin.

MD-90 is an upgraded version of MD-88 aircraft. Both are equipped with an electronic flight instrument system (EFIS) and powerful, fuel effective IAE V2500 engines. The initial MD-90 featured a glass cockpit similar to that of the MD-88.

The aircraft has 1.4m fuselage forward stretch of the wing, which extends the seating capacity to accommodate ten more passengers. The stretch forward of the wing also balances the extra weight of the engines. The MD-90 also contains an EFIS glass flight deck and an improved passenger interior.

The aircraft has an advanced flight deck which comprises a flight management system (FMS), an inertial reference system and LED dot-matrix exhibit for system and engine supervising. The flight deck consists of a thrust rating panel, which allows the pilots to select from 25,000 pounds of thrust to 28,000 pounds of thrust depending on the conditions of each flight. The changed thrust choices of less than 25,000 pounds are also accessible. The thrust rating panel makes flight more economical and provides high power for high height airports.

The MD-90s delivered to Saudi Arabian Airlines carried a glass cockpit with avionics and an overhead display panel for easy transition for the pilots.

The engine’s design reduced the noise levels, making it one of the quietest aircraft ever built in its class at that time.