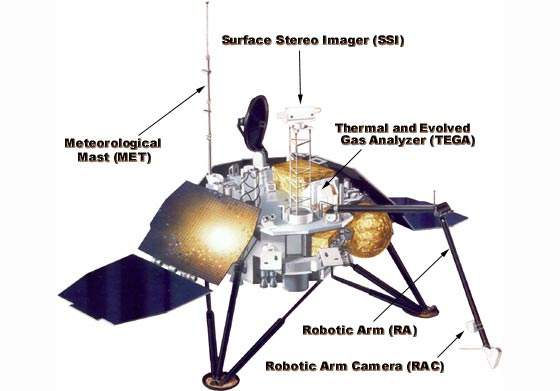 Diagram of the Mars Polar Lander.

Diagam of the meteorological mast.

Diagram of the spacecraft's robotic arm. 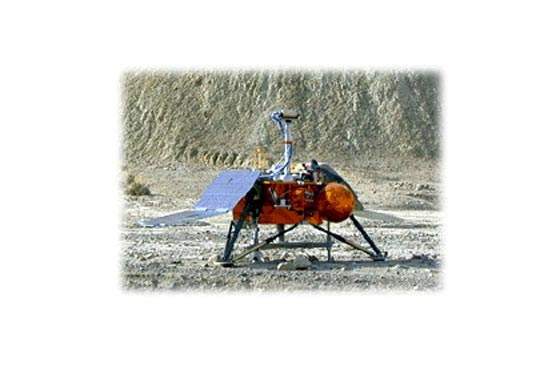 The Nasa lander was tested in Death Valley, California before being sent to Mars. 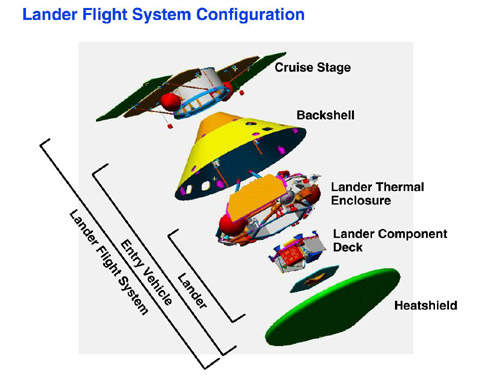 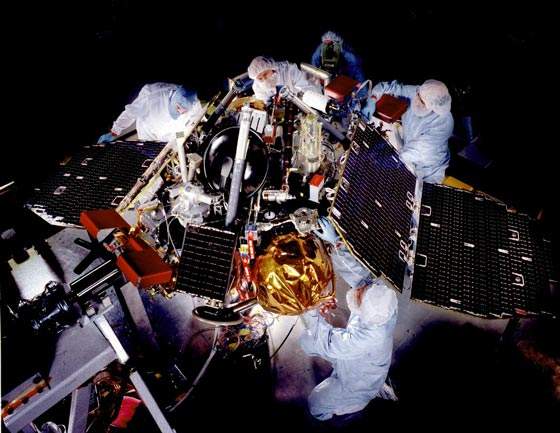 The two missions were designed to study the Martian weather, climate, and water and carbon dioxide budget, in order to understand the reservoirs, behaviour and atmospheric role of volatiles and to search for evidence of long-term and episodic climate changes on Mars.

The project involved sending the Mars Climate Orbiter and Mars Polar Lander to Mars, so as to analyse the planet’s atmosphere and terrain. The mission cost $154 million, which includes $65 million for the cost of the craft.

The five primary objectives of the mission were:

The project used a number of different instruments for the data collection. This includes a Mars Volatiles and Climate Surveyor (MVACS) instrument package, which included a robotic arm and attached camera, mast-mounted surface stereo imager and meteorology package, a gas analyzer and a Mars Descent Imager (MARDI), which planned to capture regional views from parachute deployment at about 8km altitude down to the landing. In addition, the Russian Space Agency provided a laser ranger (LIDAR) package for the lander, which would be used to measure dust and haze in the Martian atmosphere. As well as this, a miniature microphone was also on board to record sounds on Mars.

The Mars Volatiles and Climate Surveyor’s Meterological Package (MET) will function as a Martian weather station. The package consists of a collection of sensors at various heights on two masts, as well as a four pressure sensors that reside on the lander deck.

The MET comprises the MET mast, which has three temperature sensors on the 1.4m main mast, a wind sensor at the top of the mast, which detects speed and direction and a tunable diode laser (TDL) spectrometer on the mast, which measures water vapour in the atmosphere as well as other gases.

Also included is the robotic arm atmospheric temperature sensor (RAATS), which acquires temperature measurements near the lander deck, and a MET pressure sensor which will measure the changes in the atmospheric pressure near the surface. This was provided by the Finnish Meteorological Institute, Department of Geophysics (FMI/GEO). Furthermore, the MET is equipped with a soil temperature probe (STP), which can measure the temperature of the Martian soil.

A pair of small probes known as the Deep Space 2 Mars Microprobes, were attached to the lander spacecraft. These were used to fall and penetrate beneath the martian surface when the spacecraft reached Mars. The Lander weighs approximately 583kg, including 64kg of fuel, an 82kg cruise stage, a 140kg aeroshell/heatshield and the two 3.5kg microprobes. The craft incorporates a thermally regulated interior component deck, which holds temperature sensitive electronic components and batteries and the thermal control system.

The robotic arm, the stereo imager and mast, a UHF antenna, the LIDAR, the MVACS electronics, the meteorology mast and the medium gain dish antenna are mounted on top of the base. The MARDI is found at the base of the lander and the propellant tanks are affixed to the sides.

Communication was maintained by two solid state power amplifiers and a fixed medium gain antenna using X-band. During surface operations, communications (downlink and uplink) were to be via the UHF antenna on the lander to the Mars Climate Surveyor orbiter, which was to function as a relay to Earth.

Power, both during cruise and after landing was provided by two sets of gallium arsenide solar array wings. Power is stored in 16A/hr nickel-hydride common pressure vessel batteries for peak load operations and night time heating. The payload is allocated 25W of continuous power when operating.