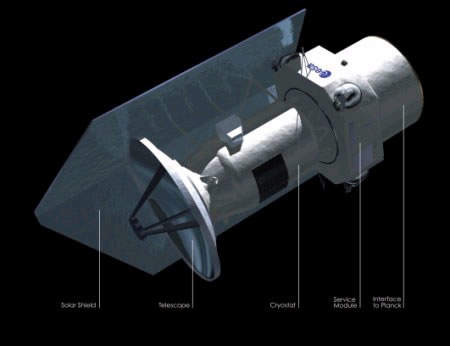 The Herschel Space Observatory is the largest space telescope ever built. 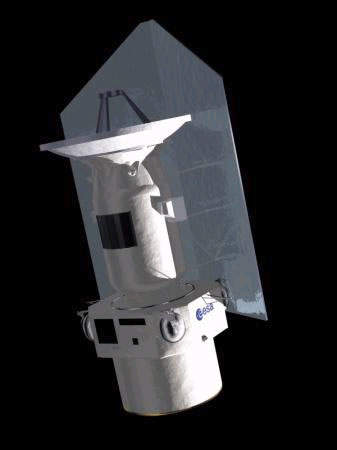 The space telescope has Alcatel as its main contractor. 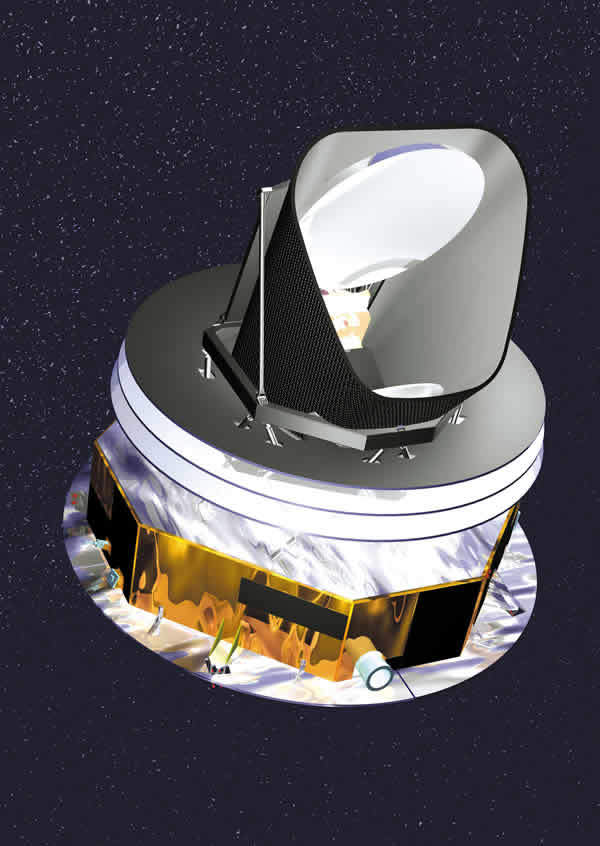 The Hershel spacecraft will be launched alongside the Planck spacecraft. 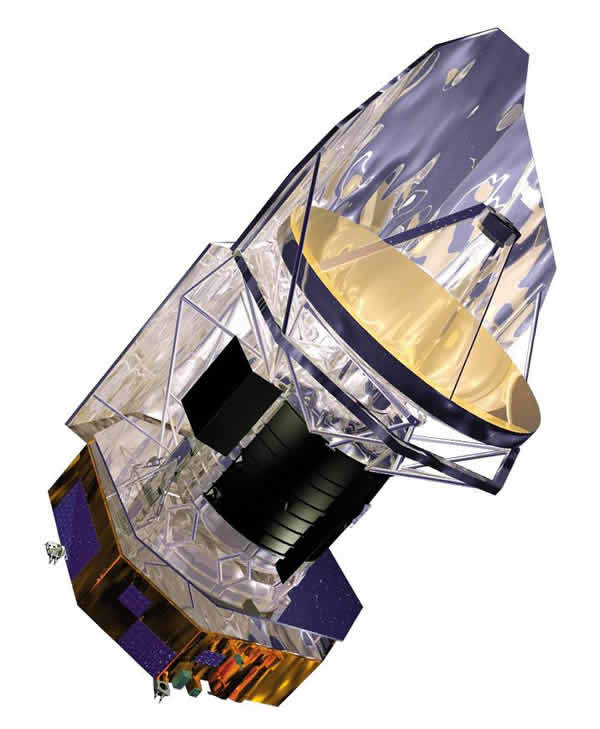 The Herschel spacecraft was launched in 2009. 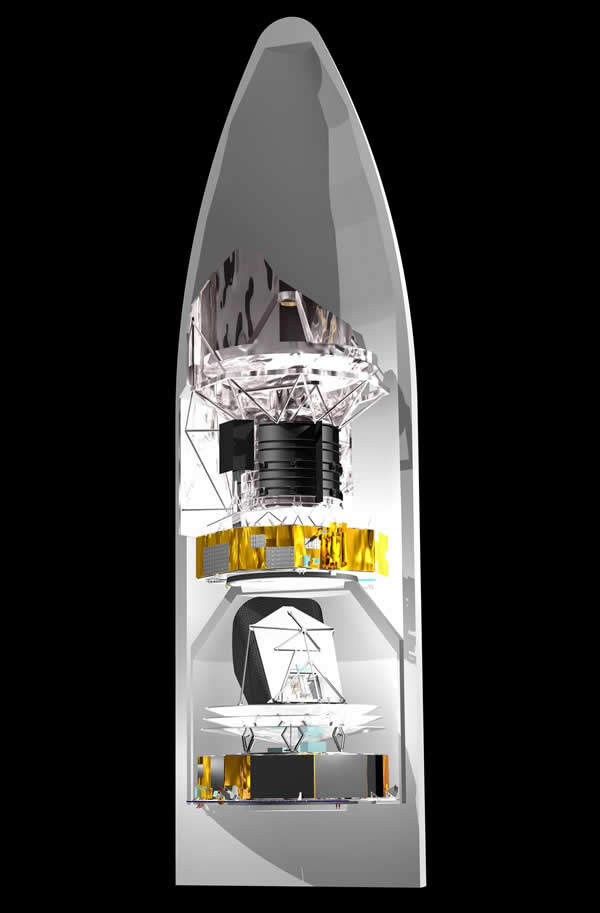 Herschel and Planck in the fairing. 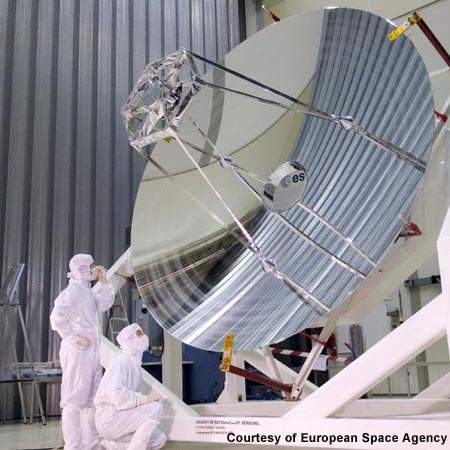 Telescope inspection prior to launch. 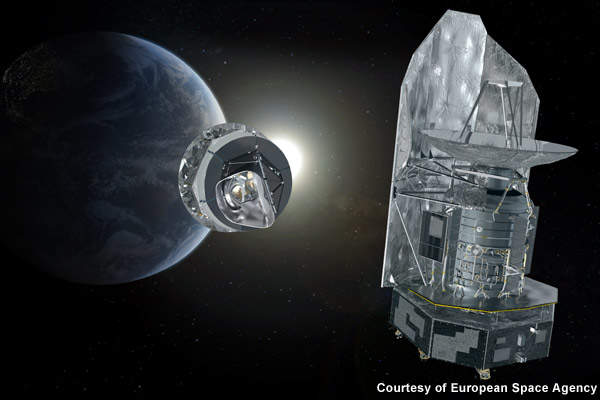 The Herschel space observatory on orbit.

The Herschel and Planck space telescopes constitute the largest ever contract in European astronomy. The European Space Agency (ESA) awarded the contract (valued at €369m) to a consortium led by Alcatel Space Industries (France).

The two satellite telescopes are separate projects with different goals and will go into different orbits, but it was decided that the two should be built under the same contract and launched on the same rocket flight due to the significant cost savings that could be made given similarities between the projects.

The Herschel space observatory (originally called FIRST – far-infrared and sub-millimetre telescope) is an infrared telescope that is intended to discover how stars and galaxies were born.

Herschel is the largest and most advanced infrared telescope ever built and observes wavelengths never covered before. It is in orbit further away from the Earth than any other such telescope in a so-called lissajous orbit around a virtual point in space known as the 2nd Lagrangian point (L2) of the sun-Earth system, facing away from the sun. This is about 1.5 million kilometres from the earth – about four times as far away as the moon. Its operational life will be at least three years.

“The Herschel and Planck space telescopes constitute the largest ever contract in European astronomy.”

The satellite carrying the telescope and scientific instruments is 7m high and 4.3m wide, with a launch mass of around 3.25t. The primary mirror will be 3.5m in diameter, which makes it the largest ever built. The three focal plane scientific instruments have been provisionally selected as a high-resolution spectrometer, HIFI (heterodyne instrument for Herschel), a camera, PACS (photoconductor array camera and spectrometer) and a photometer SPIRE (spectral and photometric imaging receiver).

The telescope is made primarily of silicon carbide, and must have an overall wavefront error in operations of no more than 6 microns. During routine operations, Herschel will be controlled from ESA’s ground station in Perth, Australia.

Infrared technology has led to the discovery of thousands of new galaxies since its conception 30 years ago, as well as discovering large amounts of water vapour in them. The Herschel telescope is the latest and most impressive example of this technology.

Infrared telescopes can pick up infrared radiation waves that are emitted from all objects, but are invisible to the human eye, so they can see cool objects unable to emit visible light. Infrared radiation waves can penetrate the large amounts of dust that surround many objects in space, so infrared telescopes can see into these clouds. Land-based telescopes would be of little value because the Earth’s atmosphere prevents the waves from reaching the ground.

The instruments in infrared telescopes have to be kept very cold (near -273.15°C, absolute zero) so that observations are not marred by their own infrared radiation.

Astrium GmbH developed the Herschel payload module and tested the Herschel spacecraft. The payload module consists of a large cryostat, filled with liquid helium, containing the scientific instruments. The cryostat acts as a huge “thermos flask” that keeps the focal plane units, which are key parts of the instruments, at -271°C, a temperature less than 3°C higher than absolute zero. As a strict requirement of the mission, this is one of the main technological challenges. The liquid helium will constantly evaporate in use. When it is exhausted, the instruments temperature will start to rise and will no longer be operable.

Alenia Spazio is in charge of the Herschel service modules where telecommunications and “spacecraft housekeeping” components are located. Alenia has extensive experience in these types of activities from previous ESA astronomy missions. Other subcontractors for the project come from all 15 countries involved.

The Herschel space observatory was successfully launched from the Guiana Space Centre in French Guiana on 14 May 2009, aboard an Ariane 5 rocket, along with the Planck spacecraft.

“The Herschel space observatory was successfully launched from the Guiana Space Centre on 14 May 2009.”

Approximately 60 days after launch, Herschel entered a Lissajous orbit of 800,000km. The satellite is located 1.5 million kilometres from the earth.

Herschel carries state-of-the-art instruments on board that have been developed by an industrial team led by Thales Alenia Space France and comprising more than 100 contractors from 15 countries in Europe and the US. The instruments were provided by European laboratories and institutes led by France, Italy, the Netherlands, the UK, Germany and Denmark, with a major contribution from scientific institutions in other countries such as the US and Canada.

The Ariane 5 launch vehicle put Herschel and Planck into the Lissajous orbit. It is an European expendable launch system designed to deliver payloads into geostationary transfer orbit or low earth orbit. It is manufactured under the authority of the European Space Agency (ESA) and the Centre National d’Etudes Spatiales (CNES). EADS Astrium Space Transportation (Astrium) is its prime contractor, who leads a consortium of sub-contractors.

The $7bn Ariane 5 is operated and marketed by Arianespace as part of the Ariane programme. Astrium builds the rockets in Europe and Arianespace launches them from the Guiana Space Centre.