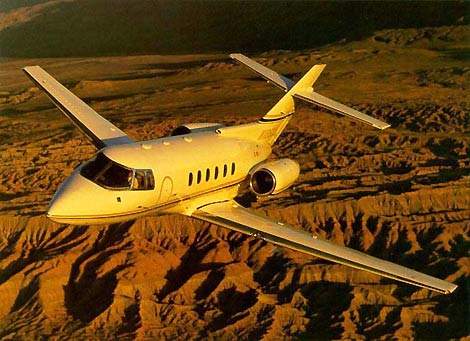 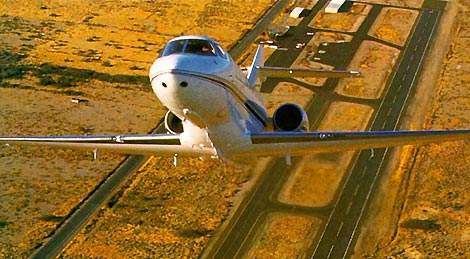 The Hawker 800XP taking off.

The Hawker 800XP can be configured as a business or VIP jet or as a special mission aircraft. 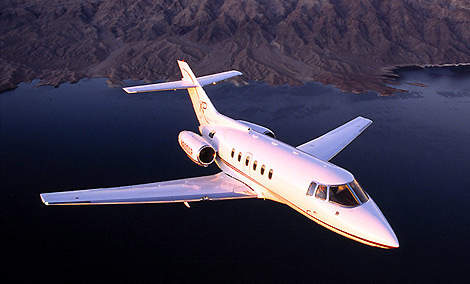 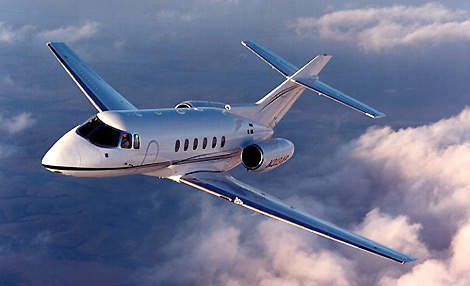 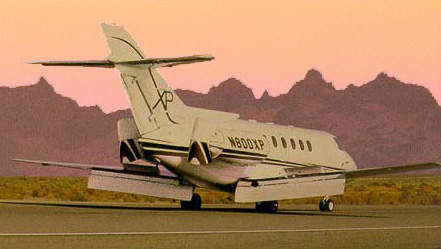 The interior has been extensively restyled with new windows, seats, lighting and tables. 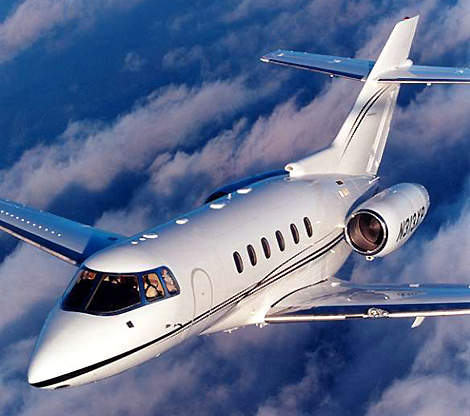 Over 1,000 Hawker series aircraft have been delivered.

800XP aircraft have been configured for special missions including flight inspection. 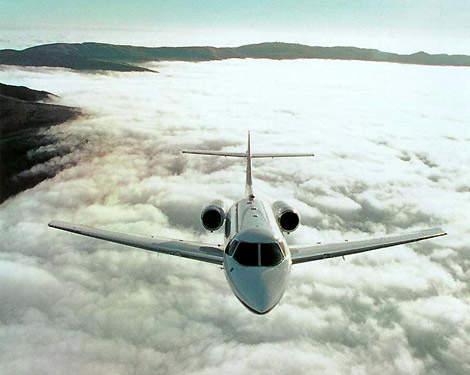 The launch of the Raytheon Hawker 800XP extended performance mid-size business jet was announced in 1995. The aircraft is in service both as a business / VIP jet and also in special mission versions. The XP features uprated engine, enhanced aerodynamics, increased weight and system upgrades.

The Hawker 800XP business jet is derived from the design of the UK-built de Havilland / Hawker Siddely and British Aerospace 125, first built in 1962, which evolved into the Series 400 to 800 produced up to the early 1990s. Raytheon purchased the Series 800 program in 1993 and the aircraft took the name Hawker 800.

The largest fleet of Hawkers is run by NetJets, the fractional aircraft ownership programme run by Executive Jet. NetJets has 100 Hawker XP aircraft including 27 800XP. A number of Hawker 800XP are in the fleet of Raytheon’s fractional ownership company, Flight Options LLC (formerly Raytheon Travel Air), along with Beechjet 400A and KingAir B200 aircraft.

A Hawker 800XP is in operation in China, providing medical evacuation services for International SOS.

In November 2005, Raytheon introduced the Hawker 850XP, a successor to the Hawker 800XPi. The aircraft has composite, outwardly canted winglets, a range increased by 4% (an additional 185km) and 8% improvement in time to climb. The 850XP has the same Rockwell Collins Pro Line 21 avionics Airshow 21 cabin management system as the 800XPi. The Hawker 850XP received certification in March 2006 and is the current production model, superseding the 800XP.

The Japan Air Self Defence Force operates the U-125 for flight inspection missions by the Hiko Tenkentai forces based at Iruma.

The Hawker 800XP is of all-metal construction with low sweptback one-piece wings, a high tailplane and rear-mounted engines. The leading edges of the wings and tailplane are fitted with a TKS liquid de-icing and anti-icing system.

BAE Systems Aerostructures supplies the doors, fuel tanks, flaps and elevators, and from September 2004, the rudder and tailplane assemblies.

The flight deck of the Hawker 800XP accommodates two crew with a third seat for an observer or crew member. The windscreen is fitted with an electrical anti-icing system.

“The Hawker 800FI is a flight inspection variant in service with the United States Air Force and the Japan Air Self Defence Force.”

The 17.1m³ (604ft³) cabin can accommodate up to 14 seats, with typical seating layouts for six to ten passengers in a variety of configurations. A VIP cabin layout provides seating for eight passengers with four club seats at the front of the cabin, a
three-seat settee and a single seat at the rear of the cabin. The luggage compartment is accessible in flight.

As part of the Hawker 800XPi upgrade, the cabin has been restyled to provide more baggage space, LED cabin lighting and the Rockwell Collins Airshow 21 cabin management system which now includes LCD touchscreens at each chair for the individual control of lighting, temperature and entertainment systems.

The aircraft is powered by two rear-mounted Honeywell TFE731-5BR-1H turbofan engines each rated at 20.73kN. The engines, fitted with Dee Howard thrust reversers, are mounted in Northrop Grumman pods on either side of the rear fuselage. The engines are
fitted with BCF engine fire extinguishers and engine bleed air ice protection.

The aircraft has integral fuel tans in the wings and a rear underfuselage tank, of total capacity 5,700l.

The landing gear is fitted with Dunlop wheels, Dunlop triple disc hydraulically operated brakes and a Maxaret anti-skid system. The main gear retracts
inward into the wings and the nose unit retracts forward.