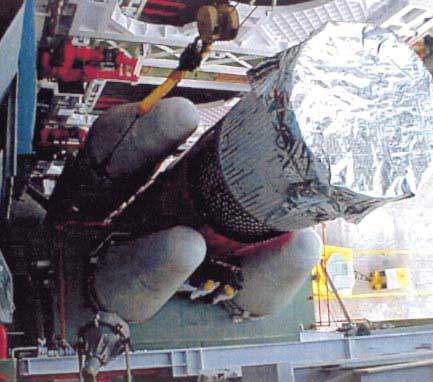 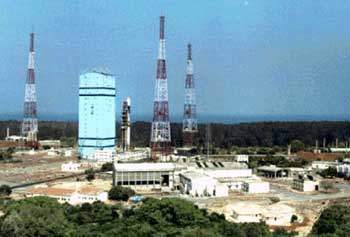 Sriharikota Range (SHAR) is the launch station for GSLV. 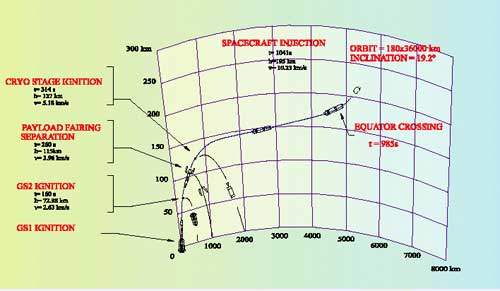 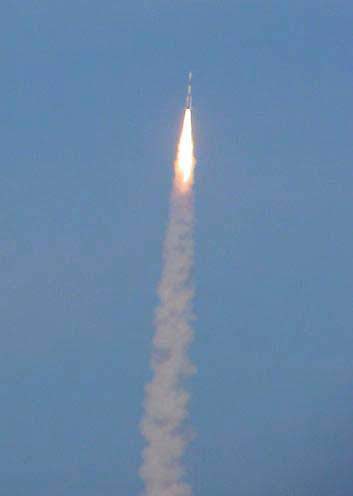 The GSLV was actually launched in April 2001.

The first launch of India’s Geosynchronous Satellite Launch Vehicle (GSLV) was successfully completed on 18 April 2001. The vehicle was launched from the SHAR Launch Centre in Sriharikota, which is approximately 100km North of Chennai.

The GSLV rocket forms an important part of the 20-year Indian National Space Programme. The purpose of the programme is to satisfy India’s needs for telecommunications, Earth Sounding, environmental monitoring and other systems as well as facilitating the country’s entrance into the world space market by building a massive satellite network. The target is to launch a minimum of one satellite per year. The Indian Space Programme has been significantly aided by Russian technology, who have provided the most vital part of the GSLV rocket, the Russian cryogenic engine, which is a major addition to Indian capabilities.

The satellite launched by the GSLV was a GSAT-1 weighing 1,540kg. From lift-off to the spacecraft entering Geoysnchronous orbit took roughly 1,040s. The GSAT-1 satellite was launched to a height of 35,786km above the earth’s surface. In comparison, the Shuttle only reaches 300km. The main purpose of the mission was to test the performance of the launch vehicle in actual flight. A demonstration satellite was launched, which will undertake experiments on communication systems, navigation and propulsion, which will be of use to future Indian communication satellites. The GSAT-1 satellite’s first signals, showed a normal performance, which was to the relief of the Indian Space Research Organization (ISRO) team. The original launch was on 28 March 2001, but was abandoned due to engine failure.

India hopes that the successful launch of the GSLV will end its dependence on foreign launch vehicles for its own satellites, and enable it to join the select group of nations (US, Russia, European Union, China and Japan) in the multi-billion dollar satellite launch industry.

The project has taken ten years and 150 Indian industries have been involved in the supply of components. The first launch of the GSLV is India’s 15th satellite launch mission and 10th successful one.

The joint agreement took a heavy setback with the break up of the Soviet Union in 1991 and Yeltsin’s refusal to honour the agreement. This was also partly due to outside pressure. The supply of intelligence was removed in 1993, when Russia joined the Missile Technology Control Regime. The GSLV project also ran into problems when the US imposed sanctions against India. India was forced to start developing its own cryogenic engine, which will be ready in 2003. However Indo-Russian co-operation on space technology was resurrected, and the GSLV-D1, successfully launched on April 18th 2001, used an imported Russian cryogenic engine.

There are two more proposed flights for GSLV in the next two years. A minimum of one more success is necessary before GSLV can be classified as operationally sound.